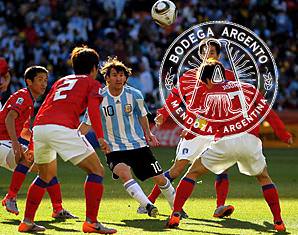 There’s a distinct danger this post will turn into an ode* to Messi, but oh what a player! We’ve since learned that South Korean, Chu-young, who scored an own goal in the match, has an IQ of 150. But it was the footballing genius of Messi that led Argentina to a convincing 4-1 victory over South Korea. And he didn’t even score a goal. The honours were left to Higuaín, who scored the first hat-trick of the tournament. And in the list of Argentine players, I’d put him behind Di Maria and Tevez, perhaps even Heinze, in the man-of-the-match stakes. It demonstrates the attacking depth of Maradona’s team.

The first half was a whitewash. An unfortunate own goal put Argentina ahead before a Higuaín header extended their lead. On 45 minutes, with Argentina 2-0 up, South Korean and Bolton striker Chung-Young, took advantage of a horrendous mistake by Demichelis, to lift the team spirits just before half time. And it seemed to have knocked the wind out of Argentina’s sails, which South Korea exploited with some beautiful football, but no more goals. Tevez was consistently an absolute workhorse, as we are used to seeing in the premiership, but his touch was a little heavy.

But by the time Maradona replaced Tevez with his son-in-law, ‘El Kun’ Aguero (another striker!), Argentina were beginning to find their stride. Messi set up the final two goals, knocked in effortlessly by Higuaín. This, again, was the relaxed, confident and intelligent side that Argentina can be and should have been in the qualifying.

Back at the hotel, the team will be pouring the mate tea, Maradona will be juggling the ball, and all will be chilled. The next game is against Greece who lost 2-0 against South Korea – and then, if the footballing gods shine, it will be Argentina vs Uruguay in the first round. And that would be something to relish.

Messi, Oh, Messi. With your bowl cut hair,
Skipping around any South Korean pair,
You line up assists,
That lead to celebratory Argentine fists,
Shirt hanging out, you seem never to care,
Then you turn up the tempo, and show your flair
As Argentina knock in the fourth with customary style,
You’ve wow’d the likes of this Anglophile.

I could go on, but perhaps won’t since I have the poetic genius of a chorizo. Instead watch this YouTube clip: