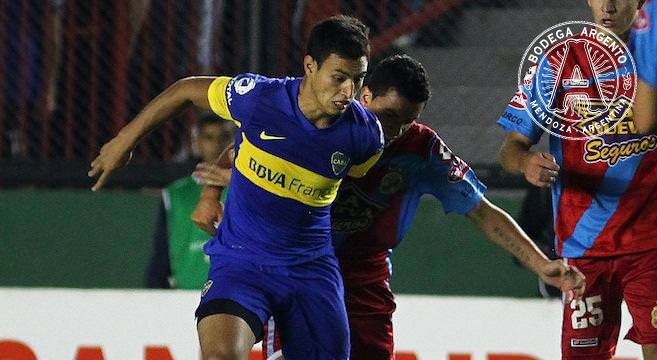 The Argentine football league varies in quality from entertaining and unpredictable to scrappy and, well… unpredictable. The one thing for which it can always be relied on, however, is its ability to produce a seemingly endless stream of talented youngsters – the best of whom inevitably end up moving to Europe’s richest leagues and quite often, to international superstardom. So which of the latest crop of Argentine footballers is destined to be the next Lionel Messi or Sergio Agüero? Here we highlight five of the most promising up-and-comers.

When Copa Libertadores champions Santos of Brazil visited Argentina earlier this year to take on Velez, all eyes were on their mohawked megastar, Neymar. Only a kid himself, Neymar is already one of the biggest stars in world football – he is a regular starter for his national side and has been valued at around €60 million, with a European move imminent. Things looked dire for Velez when injuries forced the coach to shuffle their defensive line and bring in the inexperienced Gino Peruzzi at Right Back…where he would be entrusted to contain the brilliant Brazilian. Not only did the young Argentine avoid embarrassment, he actually put in a composed, mature and technically flawless performance to completely negate Neymar’s influence on the game. Two weeks later he repeated the dose in the away leg of the tie and, though Velez would lose the match on penalties, Peruzzi’s dominance over the two games turned heads all over the continent. With changes in the Velez team over the winter break, Peruzzi is set to nail in a regular starting berth. If he can consistently repeat the form he has shown in the handful of games he has played so far, he is a future Argentina international in the making.

Perhaps the most explosive talent gracing the domestic game at the moment, the boy they call ‘The Jewel’ will be tough for River Plate to hang on to for long. Ocampos has already starred for Argentina’s youth teams as a striker, but for the past year he was also very impressive on the left wing for his club. Despite his tender years, he has proven himself one of the star players for River and is highly sought after in Europe. Already physically imposing and possessing blistering pace, his game seems perfectly suited for the English Premier League or another top competition. Ocampos himself has said he models his game on Cristiano Ronaldo, and many experts have pointed out the similarities as well. Expect a big-money move sooner rather than later.

River Plate’s academy is famous the world over for producing top-class footballers. The likes of Hernan Crespo, Pablo Aimar and Ariel Ortega have all come through the most prestigious Argentine soccer school in recent years. Holding midfielder Ezequiel Cirigliano, though, is most often compared to another River graduate, Javier Mascherano – the man who Argentina’s midfield has been built around for the past decade. Since Mascherano is known as the ‘Little Chief,’ that should probably make Cirigilano the ‘Really Little Chief,’ or something, but let’s call him ‘Mini-Masch’ for now. It is easy to see where the comparisons lie. Mini-Masch is a tough defensive midfielder who can also initiate attacking moves with his passing from just in front of the defence. Excellent at breaking up opposition attacks, he patrols the midfield in an efficient and intelligent manner. The type of player that managers love, he is likely to end up anchoring many great teams over the span of his career. 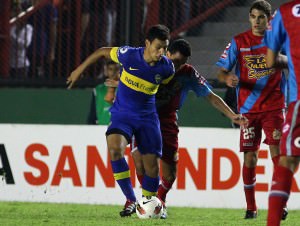 In the past year, this exciting player has worked his way into contention to become a regular starter for Boca – not an easy task considering the quality of players around him. Whenever called upon by the manager, Sánchez Miño has performed superbly, confirming the feeling around the club that he is a very special asset. Most often he has been used as a left-sided midfielder, where his pace, endurance and, most strikingly, technical ability make him a key component of the side. Sánchez Miño is also very adaptable, having played in most outfield positions during his development. A skilful player with tactical discipline, he should develop into one of the leaders of this Boca outfit over the next couple of seasons… that is, if the club manages to hang on to him.

Argentina may produce countless brilliant forwards and midfielders, but top quality defenders have been much harder to come by in the past few years. National team coach Alejandro Sabella has said his number one priority is to shore up Argentina’s defence. It will give him cause for optimism, then, that promising stoppers like Lisandro López do occasionally emerge from the mediocrity. The Arsenal man was a rock at the back as his team snuck in to win the 2011/12 Clausura, consistently putting in sturdy performances to confirm his reputation as one of the best Centrebacks in the land. He has the physicality and a calm personality needed at the back and stands out even further by offering a potent goal threat from set pieces. Aside from scoring regularly with his head, in the 2011 Apertura he also managed to net one of the best goals seen in the Argentinian league over the past few seasons (see above).