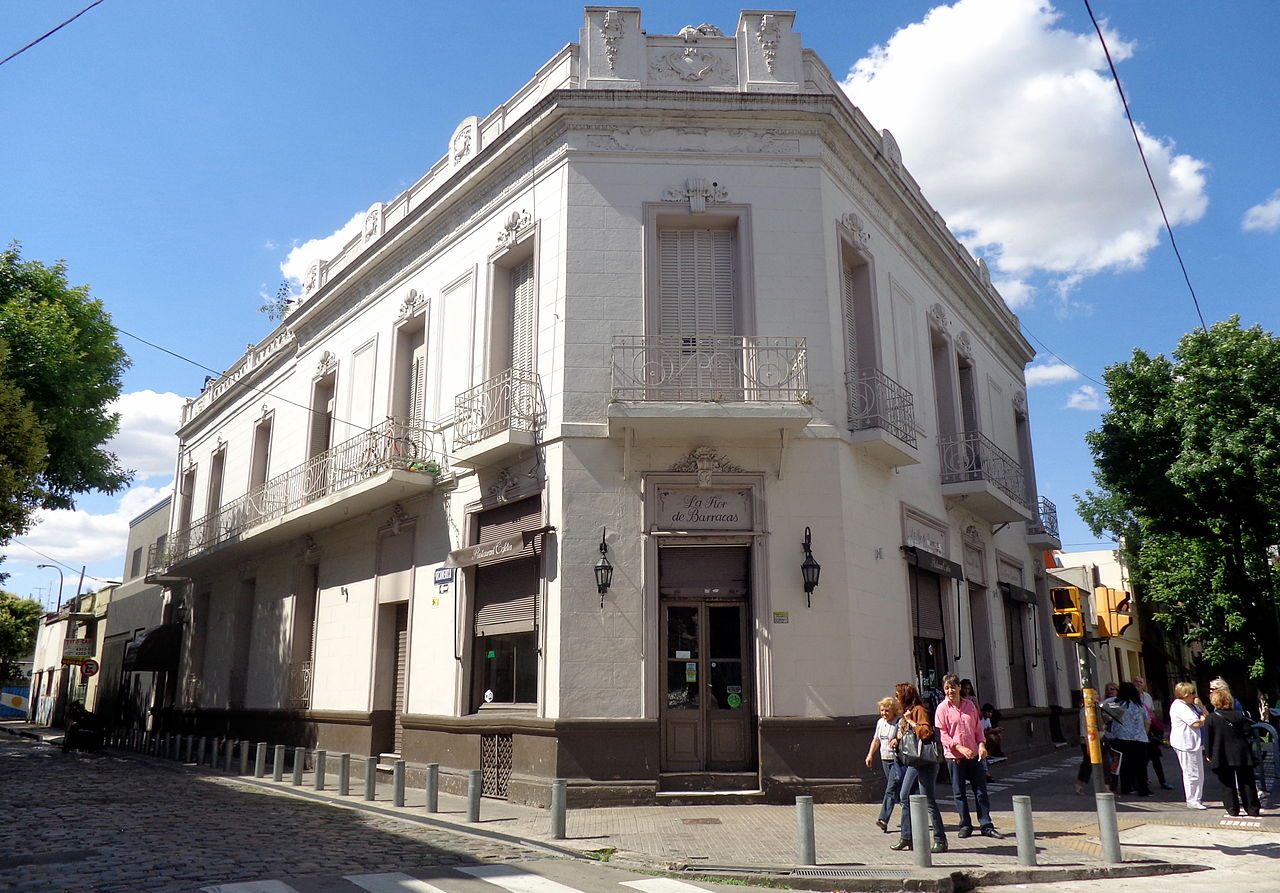 You’ve got a favourite corner bar in Buenos Aires, haven’t you? Whichever neighbourhood you live in or have stayed in, there’s surely one watering-hole, a bar de la esquina, that’s captured your heart. Thanks to their very architecture, corner bars in Buenos Aires tend to be the prettiest, standing out for that bevelled, three-sided entrance (known as arquitectura en ochava in Spanish) that lets diners and drinkers inadvertently interact, gazing out at a city in movement. And many of these classic establishments date back to the 19th century, oozing history, stories – oh, the tales these floors and walls could tell! Here, The Real Argentina visits four emblematic esquinas in Buenos Aires.

While paperwork confirms that La flor de Barracas has operated since 1906, it’s more likely this corner bar opened nine years earlier in 1897, according to current co-owner Carlos Cantini. But it certainly wasn’t one of Barracas’ emblematic esquinas back then…

Carlos says: “Originally called Fonda genoa (Genovese Tavern), this establishment has always served up food and drinks. And back then, right opposite, was the railway repair yard. That attracted all sorts of changarines (casual labourers) and characters working there; so many, that this area was known for its knife fights.”

Known variously as Luna Tarzan and even Luna Park – a boxing reference given those engine repairmen’s penchant for punch-ups – La flor is fortunately blooming once again. A family affair, Carlos, his wife, brothers and cousin took over the premises two years ago, keen to retain its centenarian ambience. This bar goes beyond vintage, it’s undoubtedly authentic, bien de barrio. Well-worn black-and-white floor tiles must have witnessed more than a few tangos, the vast L-shaped wooden bar is well stocked with vermouth, while those all-important sash windows look south. That daily panorama has changed substantially in 120 years from pampa to cityscape but regulars still love those window seats, according to Carlos.

As for décor, the original parrilla complete with sliding cover is enjoying retirement in the patio bar, old milk jugs double up as vases, while wine highlights are penned across a mirror. One of Buenos Aires’ most authentic esquinas, that’s for sure.

What to order: Homemade veggie ravioli

Another notable corner worth a look in the barrio: El Progreso

Overlooking cobblestoned Calle Defensa, Parque Lezama and Avenida Brasil in one hit, one of San Telmo’s most picturesque and historic esquinas, El Hipópotamo started life in 1909 as a grocery and beverage delivery store called Estrella del Sur. And, 108 years later, business is still booming at this corner tavern, frequented by both faithful residents and visitors passing through. Managed for the past 12 years by inimitable matriarch Ana Sala, she recounts a little hippo history.

“Workers from the nearby port used to come here to drink wine and play cards. And while we’ve undertaken some renovations, the bar is original and there are still hooks in the ceiling that fed ropes laden with goods into the basement. We replaced the red paving stone floor four years ago, though. I think Christopher Columbus brought it over, it was so ancient,” she says.

With sausages and legs of ham suspended above the service bar, El Hipópotamo’s soul is very much a Spanish one, even serving cider on tap. And here, the kitchen makes many dishes from scratch, including dough for a wide array of pasta dishes.

At any given moment – and given that this bar opens at 7am and closes at 2am, later at the weekend, it really can be any given moment –  an unobtrusive parade of hawkers passes through the Hipopótamo, bandoneón players hammering out mournful tangos or vendors selling hair accessories, but it’s all part of the makeup that gives this bar, in this neighbourhood, its unique character.

What to order: cider on tap and a charcuterie plate to share

Another notable corner worth a look in the barrio: Bar Sur

One of writer Jorge Luis Borges’ preferred haunts, Florida Garden is a modern corner classic that opened its doors in 1963. And while ceiling-to-floor panels and curved copper-covered stairway and mural replace the standardised bar notable format of sash windows and lashings of wood, regardless, this is time-warp gold from a different era.

Career waiters, many of whom have worked the two salons for 20, 30 and even 40-plus years, are decked out in white jackets, white shirts and black dicky bows; perhaps only the Alvear Palace Hotel could claim to employ more elegant staff.

Laid across two floors that look out over Calles Florida, a shopper’s heaven or hell depending on your perspective that also doubles up as bustling Microcentro, and Paraguay, the ground floor divides up into an Italian-style, bakery-espresso bar for caffeine on the hop, a main salon and back bar that serves up clericot and apéretifs. Here, you really can watch the world go about its business. The mezzanine’s quieter ambience, however, is more conducive to conversation and, dare I say it, illicit meetups.

What to order: tostado mixto with your caffeine of choice

Another notable corner worth a look in the barrio: Confitería Saint Moritz

“Los Galgos is located on an emblematic corner, which is why it’s lasted so long. That identity comes from its corner, an esquina porteña. It’s always been a meeting point for politicians, musicians and artists, and it’s close to the UCR political party’s headquarters. Tango musician Enrique Santos Discépolo used to come here, as did bandoneonistas and composers Aníbal Troilo and Astor Piazzolla. Fortunately, it’s not just a melancholic tourist place but one with identity that maintains its past, and adapts to the present while looking to the future,” says co-owner Julián Díaz.

Dating back to 1930, Los galgos’ (The Greyhounds) recent past has been checkered, closing down briefly after the owner died a few years back. But when Julián took it over in 2015 to give it a new lease of life, he very much wanted to retain the story of this, one of San Nicolás’ most emblematic esquinas.

The bar’s woodwork is original, as are the oak walls, doors and sash windows, and while a white ceramic greyhound watches from its perch above the bar, its black friend has mysteriously disappeared, according to Julián. “Cients such as Ricardo have been coming for hundreds of years; he’s totally part of the furniture,” he adds.

What to order: frogs’ legs for dinner

Another notable corner worth a look in the barrio: Café Mar Azul

What’s your favourite bar de la esquina in Buenos Aires? Tell us in the comments below.