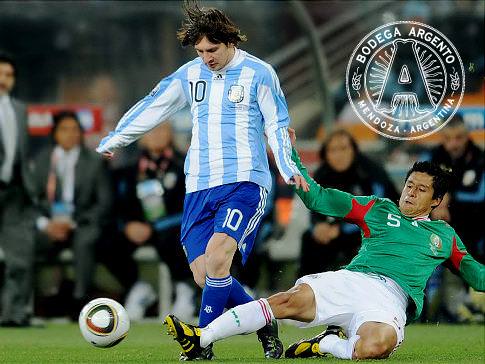 Ah. Yes. This is football. Football, they say, is more than just a game. Put two fiery Latin sides into the equation and you have 90 minutes of talent and controversy, passion and goals.

By half time in Argentina’s Round-of-16 match versus Mexico, Maradona was breaking up an argument (really) as the frustrated Mexicans lost their temper. Why the frustration? Where to start? (Beware: this gets a little complicated, but keep with it, there are fights, goals, the second worst refereeing decision of the World Cup and someone was certainly fired).

After several fabulous shots from afar in the first half (including one which rattled the cross bar), the Mexicans appeared to be on a level playing field. The first break for Argentina came when a Messi run (¡obvio!) put Tevez through. The brave Oscar Perez couldn’t hang on to the ball and was punished as Messi shot again. It was off target but Tevez got a head on to the ball and scored. One problem: Tevez was a metre off side. The assistant referee kept his flag down. Goal stands. However, someone in an office somewhere hit the replay button on the big screens clearly showing the goal off side. Replays are not allowed (see earlier England game). Everyone in the stadium clearly saw it off-side. The rightly aggrieved Mexicans go crazy. Someone who pressed the replay button loses a job. The great debate about action replays for referees intensifies after England’s earlier disallowed goal.

The second goal was because of a horrendous mistake by Mexican defender Ricado Osorio, who passed the ball directly onto Higuaín (now the tournament’s top scorer with four), who comfortably slotted the ball in. 2-0.

At the half-time whistle, the Mexicans continued to complain. The Argentines, quite possibly goading (they do that a lot in football), have a bit of a ruckus. Maradona breaks it up. Spanish lip readers learn a few more naughty words.

After half-time, Argentina dominated. Eight minutes into the second half, Tevez scores the goal of the 2010 World Cup so far. (I, writing this live, drop laptop, spill mate tea and terrify pregnant wife with a cheer possibly heard in Buenos Aires). From three metres outside the box, the Manchester City forward fires it into the roof of the net. Bliss. 3-0.

Peep. Over. Argentina are through to the quarter finals. They will now play Germany next Saturday. In Berlin four years ago, they beat Mexico in the last 16, and played Germany in the quarter finals, only to lose on penalties. Next Saturday, Maradona, and an entire nation, will be hoping history does not repeat itself. But Argentina vs Mexico was a game to relish.

This, mis amigos, is football.