This is South America’s World Cup. Of the eight groups in the World Cup, Uruguay and Argentina have been crowned first stage winners. As it stands Chile, Paraguay and Brazil are at the top of their groups. Of the two central American teams only Honduras will bow out, with Mexico qualifying in second place. By contrast, the European powerhouses: Germany, France, Italy, Portugal and England have all had stuttering starts, surprising the pundits.

However, of all the South American teams playing, it’s Argentina that look most convincing. Worries about the madness of King Maradona have been calmed by intelligent and effective choices, and worries about a tired Messi (he is said to have played 70 games last season) proved unfounded. Argentina have been mature, calm, assured and confident. There have been a few defending wobbles, but nothing compared to the likes of the European teams.
Argentina’s final group game against Greece further displayed the wealth of talent, and also the depth. Assured a place in the last 16, Maradona rested Tevez, Higuain and Mascherano. The coach didn’t, however, exude enough confidence to give Messi a game off. The skill of the World’s Best Player ™ in moving the ball from midfield into the box is Argentina’s best weapon, even when the Greeks ordered four players to surround him at every opportunity.

The fact it took until the last 15 minutes of the game for Argentina to score belies the quality of Argentina from the outset and the particularly poor, lacklustre quality of Greece. Resting the stars of the first two games allowed the, ahem, elder statesmen of the team to play. The 35-year-old Veron had a great game, almost scoring from a terrific set piece. And after all I said about Martín Palermo, not only does he get a game, he scores (I still think he’s a donkey). The Boca player knocked in a sitter in the 89th minute, providing a delicious ending to Argentina’s group stage, and giving the 36-year-old player his 16th cap and 9th international goal. 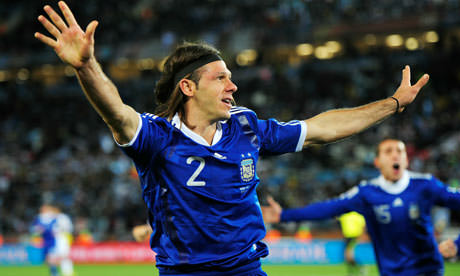 Defender Demichelis redeemed an earlier error, which nearly led to Greece equalising, by hammering the ball in from within the six yard box. Both goals came from sublime Messi runs. Although he has yet to score, he proved how indispensible he was to the team – almost to the point of it being unhealthy. But for this campaign no one will worry. Argentina, under one time winner Maradona, have their eyes firmly set on the trophy. And the next game against Mexico at 7.30 (GMT) on Sunday 27, should be a breeze. And then they will play the winner of Game 3. And who is that? Either Germany or England. Oh, my, this is turning into a wonderful World Cup.