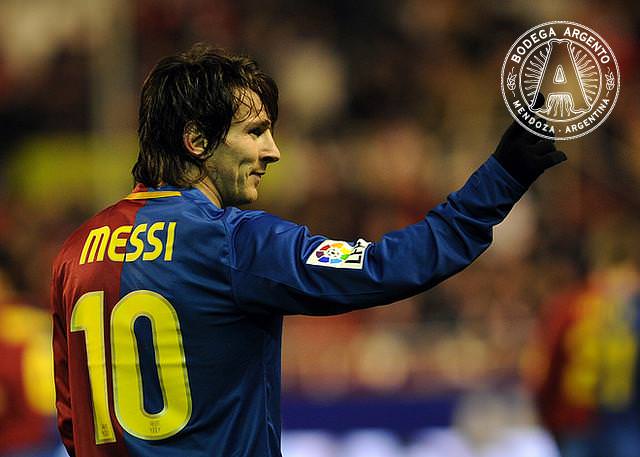 Lionel Messi is widely regarded as the finest footballer on the planet. He has won the last two ‘World Player of the Year’ awards and is all but certain to take home the gong this time around as well. He is the best player at his club side, Barcelona, a team being spoken about as one of the greatest of all time. Every year he breaks goalscoring records that normally take an entire career to surmount, and he does it in such a mind-blowing, eye-popping, jaw-dropping fashion that he is already considered one of the legends of the game. All this and he is only 24 years old.

‘La Pulga’ (The Flea) is universally admired wherever in the world football is watched – except in his native Argentina. It would be a gross oversimplification to say that Messi is unloved in Argentina. There are millions of Messi fans around the country and his name currently graces the back of more replica Argentina shirts than any other player. But he is certainly subject to more denigration and skepticism in his homeland than anywhere else in the world. 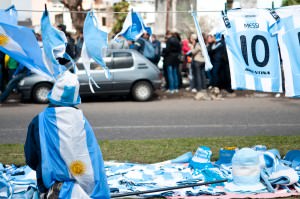 Messi is still popular, despite his detractors
Photo by Wagner T. Cassimiro “Aranha”

Why is it so? Why do so many Argentinians, rather than rejoicing the fact that this rare gem of an athlete was fashioned in Rosario rather than Sao Paolo or Madrid, constantly question his worth? It boils down to a combination of factors, some understandable, some just daft.

Having left Argentina at the tender age of 13 to live and train in Barcelona, the most common anti-Messi refrain from fans or pundits in Argentina is that his true loyalties lie with the Catalan club rather than his own national team.

“I get the impression that he doesn’t feel comfortable in the national team. For Barcelona he jumps, runs, shouts, he hugs his teammates, he enjoys himself. Here he does a few things but he is not the same player.”

These were the words of rough-edged Quilmes Atletico Club coach Ricardo Caruso Lombardi, in an interview with the Clarin newspaper recently. Caruso Lombardi is a controversial and somewhat unsophisticated soul, but his words did cause a bit of a stir in the media. However, he was basically paraphrasing the oft-repeated sentiments of taxi drivers and doormen all over the country. 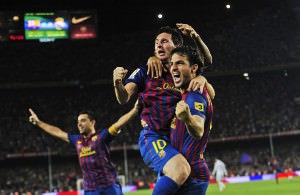 Messi and Fabregas celebrating with Barcelona
Photo by Audrey Pilato

Though public perception is gradually shifting, it is still quite common to hear such barbs directed at Messi. Those critics conveniently miss the point, however. Messi trains with his Barcelona teammates endlessly, building a rapport that is impossible to replicate with his erstwhile companions in the national team. It is a situation that is repeated the world over, whenever international football is played – players rarely reproduce their best club form. Scoring less for Argentina is also a consequence of his role within the team. Messi is usually asked to be the sole creative hub for the Albicelestes, meaning he sets up a lot of goals but does not get as many chances himself. That being said, he currently sits at 10th on the all-time list of goalscorers for Argentina, is now captaining the team and is almost always the best player on the field whenever they play. Yet a sense of disquiet still lingers.

The crux of the issue is that little Lionel left his homeland before he had made a name for himself in the local footballing scene. Normally, even phenomenally talented players will spend a year or two playing in Argentina’s Primera division before heading off for global fame and fortune in one of Europe’s big leagues, allowing them to build an affinity with one set of fans and cement a reputation with the public at large. If they happen to play for Boca Juniors or River Plate, by far Argentina’s most popular teams, even better. Footballers who pass through one of those clubs generally have a built-in set of cheerleaders back in Argentina for the duration of their careers, no matter where their globetrotting leads them.

As a consequence, Messi is subjected to naff criticism for not singing the national anthem before international matches, or his perceived lack of passion on the pitch. The truth is, the world’s best player is an exceedingly timid character. He cringes when confronted with the TV cameras, blushes when asked personal questions in press conferences and one can picture him having trouble singing happy birthday in front of his family, let alone belting out the national anthem in front of millions of viewers. His lack of expression on the field when playing for Argentina is an exact mirror of his demeanour when representing Barcelona. He may lack a strong personality, but he tends to let his actions on the pitch speak for him. 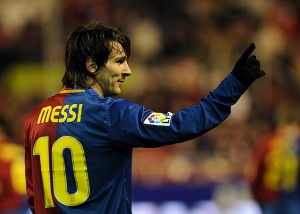 What Mess lacks in charisma, he makes up for in skill
Photo by prettyfriendship

The question of charisma brings us to another factor which has seen Messi struggle to win over the Argentinian public. This mumbling lad from a middle class family will never match up, in some of his countrymen’s eyes, to the blustering, manic force of nature from the slums that is Diego Armando Maradona. ‘El Diego’, the man who almost singlehandedly lead Argentina to World Cup glory in 1986 is, and always will be, the greatest player of all time in the minds of many Argentinians, especially those who were around during his pomp. Anyone who dares challenge his position at the pinnacle of the greats, even if he is a fellow Argentinian like Messi, is instantly dismissed as a pretender – often aggressively so.

Messi himself appears to be reasonably unperturbed by all this. There are fears that the constant sniping will push him to quit the Argentina team altogether to focus on his club career. That is unlikely to happen. Messi happily acknowledges that Maradona is the best of all time and continues to give his all when called upon by his country. No other footballer has shown his level of commitment to the national side in recent years – he never misses a game.

One gets the impression that there will always be pockets of anti-Messi sentiment in Argentina. There are those who stubbornly maintain their views, even as evidence mounts to suggest that the diminutive Barcelona star is on the brink of becoming an immortal of the game. There is perhaps one thing, and one thing alone that would silence the naysayers; the image of Messi lifting the World Cup in Brazil’s Maracana Stadium in 2014. In the meantime, Argentina will no doubt continue its love/slate relationship with Messi, while the rest of the world simply sits back and enjoys watching him play.