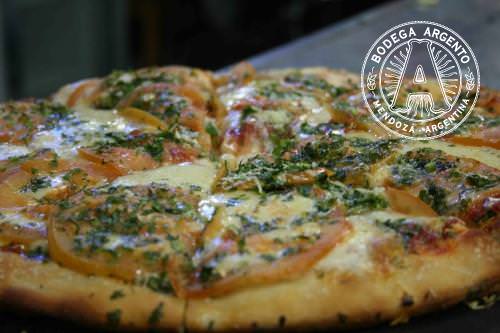 Meat, meat, meat. There is no doubt that Argentina can do the Best Steak in the World ™ but there is one food that porteños adore almost as much as their beloved bovine: pizza. If you want to start a heated debate between two porteños (not tricky), either ask them to define Peronism, or ask them where to find the best pizza. It’s in their blood you see. The majority of Argentines claim Italian ancestry, significantly more than Spanish, which is why you’ll find fresh pasta outlets on every other block and pizzerias everywhere. But if you are looking for an authentic thin crust Roman pie, I’m afraid you are going to be disappointed. In Buenos Aires, pizzas are bready, smothered in an inch of cheese and loaded with toppings. 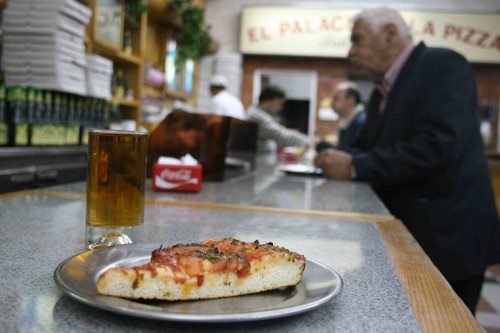 The classic Buenos Aires pizza is the fugazetta, or fugazza con queso, which the government, rather ambitiously, listed under foods of ‘patrimonial value’ (alongside milanesa – a escalope from Milan, which is no where near Argentina).

The history of this pizza is more than 100 years old. In 1893 Don Augustin Banchero disembarked in Buenos Aires from Genoa and opened one of the country’s first pizzerias. The family, who now have four branches, claim to have invented the fugazza con queso, and this cheese and onion pizza, has since practically become part of the Argentinian staple diet. Banchero’s main pizzeria is on Corrientes (Av. Corrientes 1300, 4382-4669). In fact the legendary Avenida Corrientes, immortalised in everything from tango to rock nacional, is not only one of city’s main arteries, but also offers probably the most effective way to block yours.

There are half a dozen classic pizzerias along this street, each fabulous.

Güerrín is perhaps the best, in this bloggers opinion (fight, fight). Choose to stand up in the entrance, or sit down out back and order the classic combination: fugazetta, fainá and moscato. Fainá is a flat bread made from chickpea flour which you place on top of the oozing pizza. It is also a legal obligation in Buenos Aires to knock this back with moscato, a sweet and strong fortified wine. It usually comes in a head-spinningly large glass.

Off Corrientes is the legendary El Cuartito (Talcahuano 937, 4816 1758), one of the city’s most atmospheric joints. Little changed since serving up its first pizza in 1934, El Cuartito is a taste of Buenos Aires in its tango heyday. Signed photos of football, boxing and horse racing stars watch as the waiters run around with their giant pizzas. Order a large glass of wine (the cheaper the better for authenticity and serve with ice) and a large half roquefort and half pepperoni and a couple of slices of fainá, and slowly devour.

Other places to try pizza along Corrientes include the brightly lit Las Cuartetas (Av. Corrientes 838, 4326-0171) opposite the art deco Teatro Gran Rex. We’d recommend the béchamel-heavy spinach pizza here. Nearby is the decidedly not palatial El Palacio de la Pizza (Av. Corrientes 751, 4322 0441). El Palacio is a classic insight into an unmistakable part of BA culture: the pizza al paso (pizza on the go – usually stood up at a bar). The tomato-laden napolitana, with a fetching stainless steel plate and cutlery set is the best bet. Enjoy it, it may be the only vegetable fix you have here. 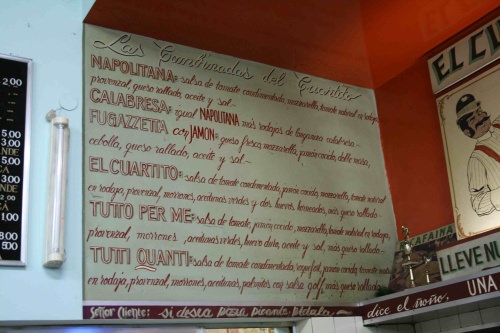 3 responses to “Pizza in Buenos Aires”