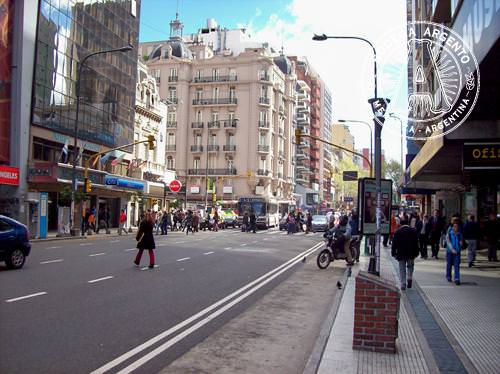 If you’re looking for somewhere to eat in Buenos Aires that won’t break the bank, here are my top tips on finding some traditional Argentina food establishments when out and about in the city.

La Rosalia, on the border of San Telmo (Estados Unidos 482, Scalibrini Ortiz and Armenia), is my Tuesday night restaurant. True, it was less than a block from my old apartment, but it was a solid option where the cost of a heap of meat, a bottle of cheap wine (with ice) and chips for two is less than £10. It’s not going to win any design awards – heck, there isn’t even a window over one part, just metal shutters – but it’s homely. The menu arrives stuffed in a sticky plastic sheet, workers stand next to your table waiting for a choripan, and there’s a wine selection that you wouldn’t touch without at least three ice cubes in it. But for a gringo in Buenos Aires, it fulfilled two essential criteria: a) it’s cheap, really cheap; and b) it was the real Argentina. My wife and I, and a couple of other regular friends, were the only foreigners to eat here, squeezing around one of its seven or so tables, but the owner knew us and chatted to us. It was the kind of place that people say is ‘bien del barrio’ – ‘truly of the neighbourhood’. You wouldn’t travel half way across the city to get there, but it’ll do. I loved it, the food was perfectly passable – and abundant.

I know places like this all over the city: cheap places for cheap cuts of meat such as such as asado (ribs) or vacio (flank), but always tasty too. One slightly more upmarket joint – it has tablecloths, paper ones, but tablecloths nonetheless – is El Gardelito (Thames 1914), also in Palermo. Dining with my wife and another couple, an asado with all the trimmings, three bottles of wine (I know) and dessert cost £45. 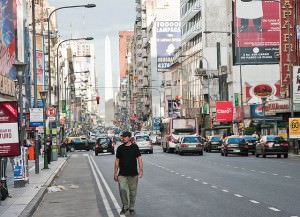 Downtown, you can still pick up a choripan for a couple of pesos – it’s not a prime fillet, but filling enough. Downtown however, is all about pizza, pizza, pizza. And what pizza!

Avenida Corrientes is where to find the city’s best pizzerias. For porteños, discussions about the best pizza can even supersede politics in the ‘easiest way to cause a fight’ stakes. What all porteños agree on, although always out of ear-shot from a passing Italian, is that the thick-crusted, topping-heavy cheese-feast is possibly the best pizza in the world. First stop is El Palacio de la Pizza (Corrientes 751) – the place to pick up pizza al paso (pizza on the go – usually stood up at a bar). Wash it down with a glass of moscato, a sweet fortified wine.

Another classic is El Banchero (Av. Corrientes 1300, 4382 4669) known for its fugazza con queso, a pie laden with cheese and topped with onion. An unfeasibly large glass of cheap red wine (watered down with soda and ice) completes the experience.

Güerrín (Av. Corrientes 1368, 4371 8141) is where you should demand the mozzerella, fainá and moscato. Rare is the slice without fainá, a sort of pizza made with chickpea flour. Cheap and filling. 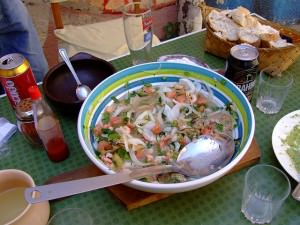 Ceviche in a rustic setting – Photograph by lilap

After such a meat and pizza-heavy diet that will dominate any visit to the capital, I’m going to throw in a curve ball: ceviche. Exclamations that it is the new sushi may have a hint of hyperbole, but this Peruvian dish is increasingly plentiful in Buenos Aires, and very well priced. It’s even healthy – bonus! But what is it? At its simplest, ceviche is raw fish, usually sole, sea bass, or most commonly in Buenos Aires toyo (a small shark). It is ‘cooked’ in lemon and lime juices – the citrus has the same affect as heat. It’s often mixed with red onion, hot red chillies and served with corn, sweet and white potato, and a thrillingly hot sauce (probably the only real spice you’ll find in Argentina). There are two great, cheap ceviche joints in Buenos Aires, both downtown near Congreso. Chan Chan (Hipolito Yrigoyen 1390) is kitsch, colourful and an utter secret – wash down the ceviche with chicha morada, a fruit cordial. Around the corner is Status (Virrey Cevallos 178), mildly more upmarket, and home to equally good ceviche. It’s loud, laid back and full of Peruvians tucking into a taste of home.

One final classic is Bodegon Bellagamba (Avenida Rivadavia 2138) – this typical neighbourhood eatery is incredibly cheap. Under low lights, with pictures of tango singers on the wall, dark wood tables and sewing machine stands, it also makes for an atmospheric stop. It’s basically a canteen – grab a tray and pick out your food from meat, milanesas, salad, chips and slices of pizzas, but its the empanadas (small pasties usually with meat or ham and cheese) where they excel. Grab a few, order a large Quilmes beer, and enjoy the quirky surroundings for next to nothing. 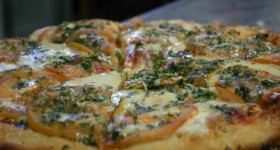 5 responses to “Restaurants in Buenos Aires: Eating Out on a Budget”