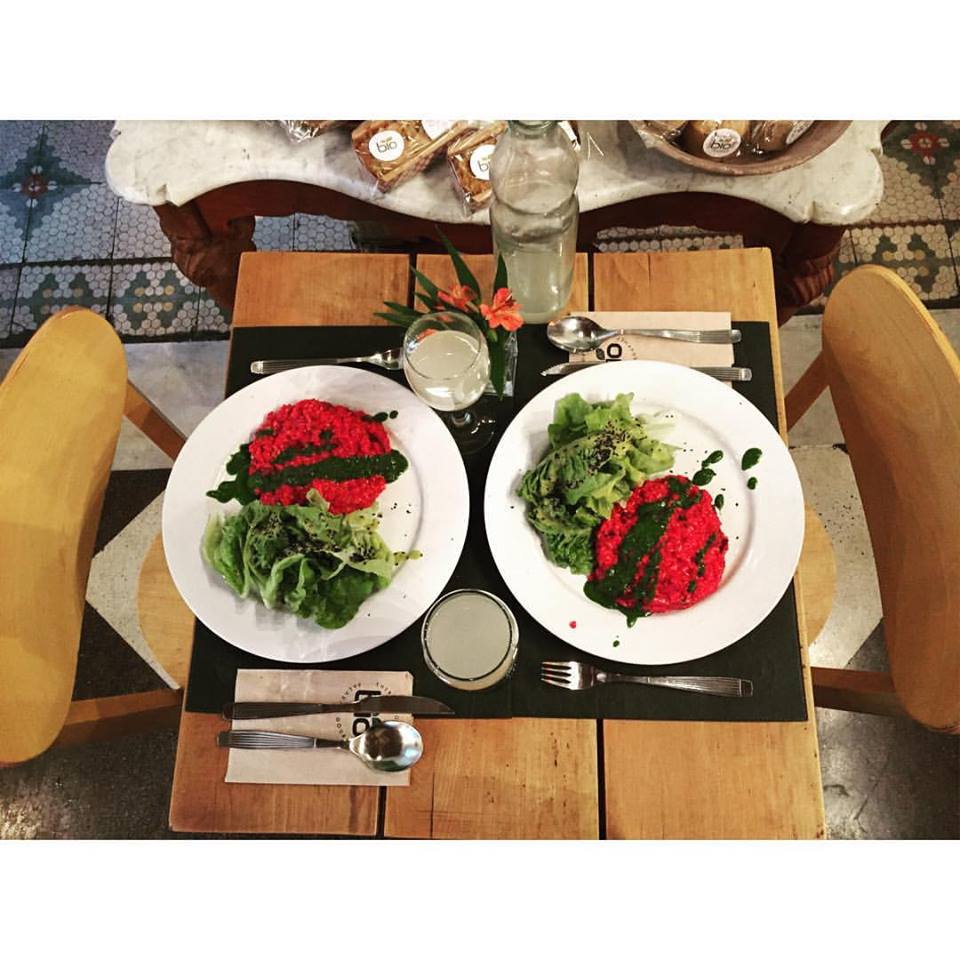 You don’t eat meat. In fact, you’re vegan. In Buenos Aires? Well, you’d better get used to the laughter. But stop right there. Food choice has come a long way since Lonely Planet labelled Argentina as one of the worst countries in the world for non-meat eating travellers.

Think you can’t survive as a vegan in the so-called beef capital of the world? Think again. The vegan circuit in Buenos Aires is getting wider and more interesting all the time.

Don’t put up with the same old lettuce-onion-tomato salad. Buenos Aires is a vegan wonderland – when you know where to look.

The Rise and Rise of the Vegan in Buenos Aires

It is now estimated that between 1 and 2 percent of the population doesn’t eat meat. It may not sound like much, but that actually means 600,000 people, more or less, are vegan or vegetarian here.  Sociedad Argentina de Nutrición reports that the “meatless” sector of the food market grew 13 percent between 2008 and 2012. Pinning down the numbers for specifically vegan consumers is harder, but it is fair to say that there has been no better time to be a vegan in BA.

It’s true; veganism is “cool” right now in Buenos Aires. Porteños are turning vegan for their waistlines, for the street cred, for the novelty. Then there are the die-hard vegans who have been avoiding animal products for decades. Even children are getting in on the act – El Deutsche Schule Hurlingham, for example, provides vegan and vegetarian options in the school cafeteria – 15 percent of the kids there do not eat meat. Others are less likely to use the label vegan, and to simply be into eating more cleanly, with minimum harm caused to others and the environment.

Where to Eat Vegan Food in Buenos Aires

The fact is; everyone with an interest in animal welfare or tasty good food is catered for with this new vegan wave. Committed carnivores are tempted by these cruelty free offerings. Visit BA’s vegan-friendly restaurants, cafés and markets for some filling, clean, and tasty food to suit your taste buds and your conscience. Where to go? Try these for a start in various neighbourhoods across the city:

Buenos Aires Verde is for vegans (and non-vegans) seeking full flavour, filling dishes in a bright and cheerful atmosphere – anyone who’s looking for wholesome food with pizazz. The simple, homely café/restaurant on Gorriti is perfect for a quick solo vegan lunch, dinner with friends, or a cosy date night.

Vegan starters include delights like miso soup, vegan dips, veggie sausages with vegan mayo, guacamole with raw nachos. Of the main dishes, the super-sized salads are outstanding – I loved the “full aminoácidos” with queso de cajú ahumado, quinoa, avocado, sprouts, mushrooms, and hidden crunchy nuts – pickles on the top make the plate sing, resulting in a great balance of rich and tangy.

Or choose also from vegan soups depending on the season, pizzas, sushi rolls, tofu dishes, stir fries, risottos, pasta and even “chori vegan”. In the unlikely event you don’t find any vegan options that suit your tastes, the staff is able to make substitutions. And do try to leave space for a vegan dessert. You’ll miss out if you miss their raw vegan tortas and delicious fruity ice cream.

Buenos Aires Verde also has a newer branch in Belgrano.

Doesn’t look like much from the outside, but this tiny, homely place focusing on “cocina sin carne, con aromas del mundo” serves up tasty, meatless treats; home-style. The menu is always changing, and usually scrawled on a chalkboard outside, and includes risottos, tarts, fresh bread, sandwiches, salads and pasta. Has a few purely vegan offerings. Fanpage.

With its high ceilings, cute enclosed patio garden and wooden mezzanine dining space, Artemisia is the spot for a trendy vegan brunch or candlelit dinner.

Not strictly a vegan or vegetarian restaurant, this sun-filled spot focuses on organic and natural food, and has some options for vegan diners. Home-baked bread, pastries, soups, and fresh salads are the stars here. Vegan specials in the recent past have included vegan hamburgers of Yamani rice and corn, served with cashew “cheddar cheese” and avocado, plus wholegrain mini pizzas.

The menu includes vegan choices based around Yamani rice, whole wheat pizza with rawmesan, and refreshing, healthful raw soups packed with such beauties as coriander, chilli and coconut, and punchy raw salads full of cashew nut cheese, activated seeds, quinoa and seasonal vegetables. The vegan dessert selection is equally as tempting, and changes all the time.

Now with a different location in Palermo on Honduras, Ohsawa provides a carefully thought-out menu of macrobiotic choices, with much attention to detail and using the freshest ingredients possible.

The menu changes frequently but vegan options include seasonally apt wholegrains, tofu dishes, pasta, polenta, organic salads, sandwiches, wraps, and empanadas. Stop by for a slice of vegan cake or sample some of the delicious delicacies from the dessert trolley like flans, mousse, and baked apples.

Who says you need to go to a worthy, upscale restaurant to satisfy your food cravings? Mexican joint La Fábrica del Taco does an awesome vegetarian taco (or burrito, or quesadilla), although you will have to opt out of the queso and sauces to make it vegan. La Fábrica is a cheap, cheerful taco-stand restaurant with high seats and plenty of atmosphere – perfect for a post-bar bite or a quick lunch while shopping.

Under the leadership of raw food/ vegan chef extraordinaire Máximo Cabrera, Kensho operates a closed-door restaurant at the weekends at the non-aptly named Casa Caníbal in Chacarita (exact address given when you book.) We currently await the return of the dinners – keep an eye on the Facebook page Kensho Cocina Organica for details. Chef Cabrera also runs popular cooking classes under the Cocina Crudo brand.

A cute and super-friendly little local café in San Telmo, Hierbabuena serves good, natural food and while it’s not entirely vegetarian/vegan, there are plenty of options for both. Try the mushroom veggie burgers, vegan salads, and refreshing juices and vegan smoothies.

Hearty, cheerful Italian comfort food but all veggie – this quiet spot serves up a range of home-cooked favourites in San Telmo. Dishes of the day on the week I visited included yamani rice burgers filled with eggplant, veggie empanadas with salad, ñoquis with veggie sauce, and mini pizza with salad – it’s all the Argentine traditional fare, but without the meat. Not all the dishes are suitable for vegans, but substitutions can be made. Abuela pan’s fanpage.

Vita is a natural deli and vegetarian restaurant located in microcentro – a short distance from Plaza de Mayo – and in Palermo. This down-to-earth, friendly place has a menu practically complete with vegan dishes, snacks, and drinks – practically all are super-yummy. Prices are also pretty down-to-earth, and you can also buy vegan products from the store. And for mini vegans, there’s a vegan kids meal on offer.

A cheap, no-frills restaurant in two locations on Montevideo in the centre of town, serving balanced vegetarian food with some vegan options. Try the eggplant burger with mushrooms and grilled asparagus, vegetable lasagne with tofu salsa, and zucchini tarta with raw vegetables and grilled potatoes. Dishes are available depending on the season. Sattva’s fanpage.

It’s worth making a trip to Tigre to sample the fare at this vegan market, cafe, and takeaway. Everything is 100 percent vegan in this sunny little place with a shop for vegan takeaways and produce. You’ll be glad you made the trip for burgers, stir fries, sandwiches, dips, sweet desserts, super-charged healthy drinks, and plenty more besides. Lorenza Vegan makes an appearance at many of the healthy food fairs in BA, if you don’t want to go to Tigre or the other branch in Pilar.

If you don’t want to move from the couch and need some quick and easy vegan food, these delivery options are right up your street:

Yummy vegan salad to your door? That’s what I call a takeaway. Call and pre-order a gourmet salad from new company The Travelling Greens, who deliver your choice the next day for lunch. The Earth Salad is a vegan option, with mixed greens, kale, cabbage, grated carrots, sundried tomatoes, avocado, seeds, tahini goodness dressing and optional falafel.

Got a craving for pizza but have given up hope of being able to eat one in BA? Don’t despair – Pizza Vegana is here to save the day. The pizzas are all vegan, all the time – certainly the only place in the city to offer this type of takeaway choice. These are addictive pizzas with clever toppings like caramelised onions, grilled leeks, sun dried tomatoes and special vegan salsa. Check out the pizza sabor a Bolonia, with vegan cheese, soya, organic red wine and tomato sauce, and basil oil. Simply delicious, and deliciously simple.

With four locations for delivery in Palermo, Caballito, Recoleta and Belgrano.