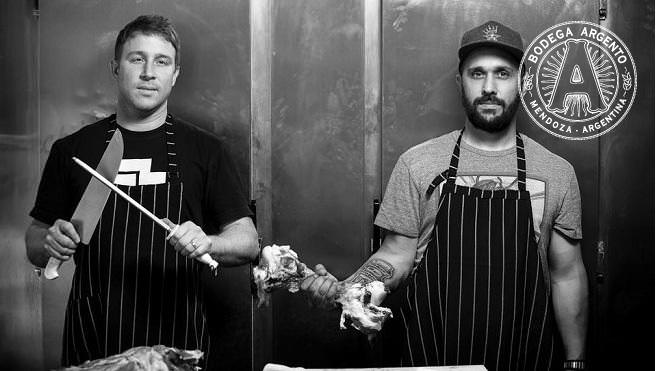 Although every Argentine wolfed down 59.4 kilos of beef in 2014 according to the CICCRA meat chamber (that’s 163 grams a day), beef consumption is actually in decline in Argentina. Surprised? Me too, given the number of parrillas lining the streets of, well, anywhere, and asado invitations I get each week. And if you’re lucky enough to have a patio-side parrilla or share one in your building, you’ll know what the queues at butchers are like at the weekend.

That said, consumption could be on the path to recovery, given that the Belgrano Cargas train is now linking La Matanza (translation: slaughter) neighbourhood with Central Market, facilitating meat transportation. We shall wait and see…

Here, we meet an array of meat purveyors, almost all of whom say that asado de tira (short ribs) is their best-selling product.

Thanks to his background in gastronomy, Ariel Argomaniz knew how to prepare cold cuts and sausages, but learning how to dissect whole beef was a whole new ball game when he and business partner Mariano Cafarelli opened Amics two years ago. 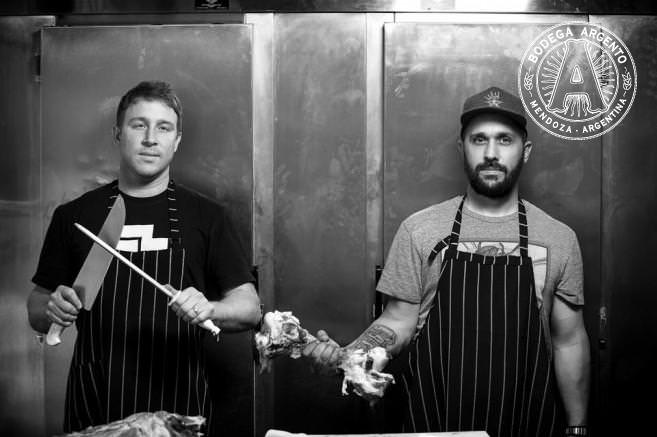 The Palermo Hollywood-based butcher uses cattle from Estancia La Presumida, Mariano’s ranch in Saladillo, Buenos Aires province, among others and takes care to only use grass-fed beef. With the illuminated look of a doctor’s waiting room, Amics’ customers include Sucre, Casa Cruz and Café San Juan; walk-in customers receive a personalised service from the team that includes butcher Ermindo Martínez, given that they know their produce’s origin.

“We opened Amics because we wanted to give something back to a profession that was suffering,” says Ariel. “And fortunately people are leaving pre-packed meat from supermarkets and returning to butchers. A butcher is like a waiter or cook – they have to know their products.”

While lomo and colita are popular products, Amics takes pride in showing off more anonymous cuts, such as marucha, which, if removed from bife ancho, becomes classic cut ojo de bife. And the pair’s passion for meat is so renowned that Feria Masticar invited Ariel to the previous three editions to give talks and live-cut up a carcass.

Shifting around 1,000 kgs a week in beef, pork and other fresh-looking goods that are so shiny they could have been polished, be sure to drop by for Amics’ line of chorizos: flavours include blue cheese, smoky bacon, spring onion and jalapeño.

About two years ago, Proveeduría Piaf was a small yet busy joint run by brothers Gustavo and Hernán Méndez – until it moved a block to take over a former Puma ‘outlet’ store opposite the Mercado de las Pulgas flea market.

Open 12 hours a day, six days a week, this Palermo Hollywood bovine boutique is always packed, selling around 1,000 kgs a day. Friendly meat professionals cut, slice and bag goods, while at least one will be busy dealing with large restaurant orders. Uco at the Fierro Hotel commissions Piaf to make their Irish-style sausages, for example, while the butcher also sells to TV chefs Dolli Irigoyen and Donato De Santis. 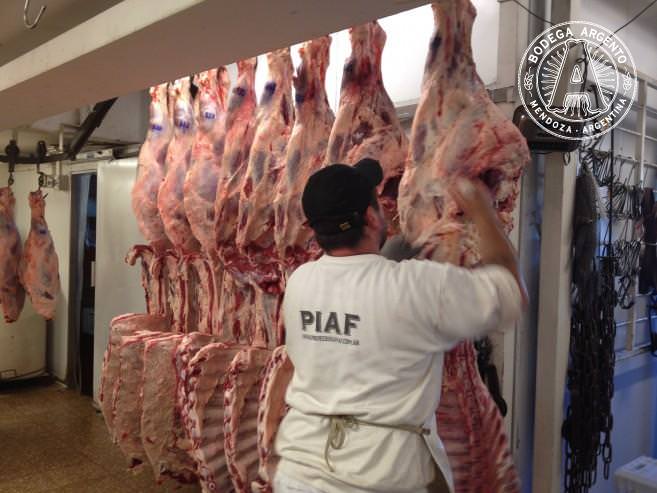 Besides beef, free-range chickens form part of Piaf’s ample range, as do ‘exotic’ cuts such as duck, rabbit, wild boar, buffalo and frogs’ legs, though it’s best to order those in advance. Besides supplying and delivering to the catering industry – I have the good fortune to live a block away so this is my local – keep your eyes peeled for local celebrities such as actor Pablo Echarri and TV presenters Daniel Tognetti and Mario Pergolini picking up ribs, tenderloin and coal.

An old-school deli and purveyor of meat located on a busy Almagro corner run by the fourth-generation of the Converso family, La Granja Converso Delicateses focuses on the ‘unconventional’. That means five types of llama, boar, frogs’ legs and rabbit among others as well as every kind of offal going. 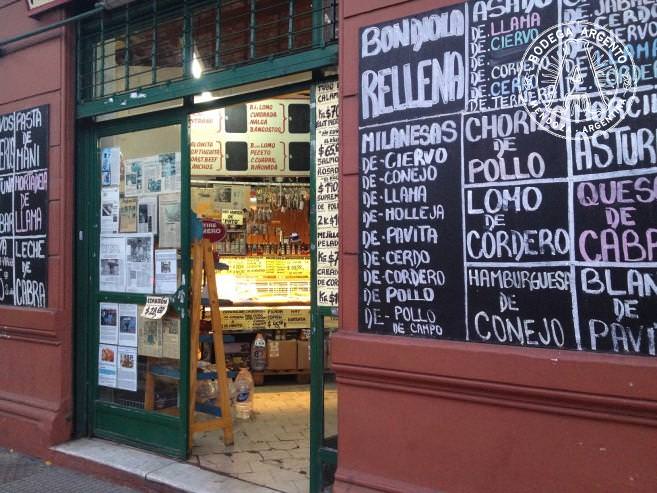 Selling around 1,000 kgs of meaty wares a week, butcher Gustavo Converso – who started peeling bones for his dad when he was 13 – also breathes life into usually humdrum milanesa by slapping breadcrumbs onto venison and sweetbreads.

Way back when, he says, free-range chicken came complete with the head and feathers, and although buying a fully dressed bird is out of fashion today, he still only deals in free-range goods. Other avians on offer include ostrich, goose, pheasant and guinea fowl. North Americans should make a beeline for his free-range turkeys come Thanksgiving or any time, given that he stocks them all year round.

Should a recipe call for yacaré (alligator) steak or boar ribs, simply check the list online, which Gustavo keeps up to date.

A big-name steak house such as Palermo’s Parrilla Don Julio consumes so much beef, it needs more than a butcher. Given that his asadores grill the equivalent of 1.7 cows a day, owner Pablo Rivero buys direct from wholesale meatpacker Frigorífico Entre Todos, a family-run business located in Mataderos (translation: slaughterhouse) neighbourhood.

Co-owner Edgardo Bovay, whose father started the business 40 years ago, says: “We only deal in novillo (steer) weighing between 450 kgs and 550 kgs, an animal sold for export although we only sell domestically. We buy directly from Liniers Market, and cattle are then sent to our abattoir in Las Heras, Buenos Aires province, where it’s cleaned before we process it in Buenos Aires.”

Although Frigorífico Entre Todos is a wholesaler, its sideline butcher does sell to the public and it’s worth noting that many Mataderos butchers often undercut other city ones, useful if you’ve got a big asado coming up. Edgardo adds: “Asado de tira (short ribs) is our most-sold product – we shift around 28,000 kgs a month – although Don Julio use lots of bife de chorizo as well as other classic Argentine cuts – it’s one of the most important restaurants we work with. “Although beef consumption is falling in Argentina, fortunately we don’t notice it due to the type of restaurants we work with.” 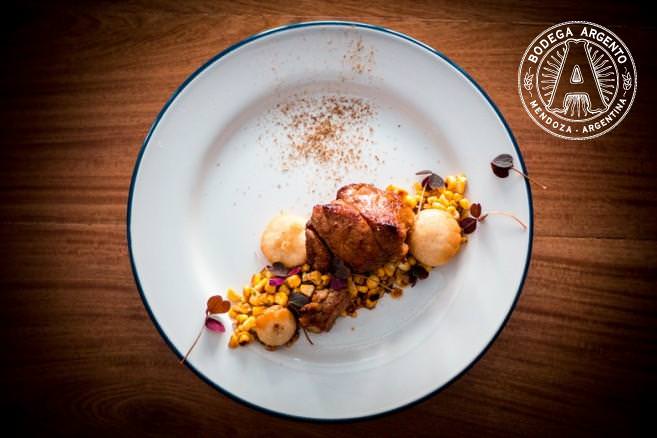 When a Colombian chef who found his passion for beef in Argentina teams up with a ranch owner from La Pampa to open a restaurant, the result is La Carnicería (translation, butcher). This new meatery opened in Palermo Soho in November 2014, and chef Pedro Peña purchases directly from Los Abuelos, a ranch belonging to his business partner Germán Sitz.

Germán says: “The business was started by my grandparents so my family has been producing our own cattle in the pampas for a long time, fattening them as well as raising dairy herds. When the idea came about to open a restaurant, I asked a meatpacker friend if he could take care of the slaughtering part. The advantage of using our own cattle is that we can play with the cows’ weight. Depending on whether it weighs 600 kgs or 435 kgs standing, each has its own flavour and level of tenderness. Our cattle get to walk around our fields in Rivera, La Pampa province, which is flat with plenty of grass; feedlot cows don’t tend to reach maturity or use their muscles like ours do, which is important when it comes to fibre assessment. Over the course of a month, we cook around 700 kgs of beef, using Hereford plus a little Aberdeen Angus. We look for heavier cows with a large layer of fat, which will give them a different flavour – and discovering new flavours is one of the objectives behind La Carnicería.” 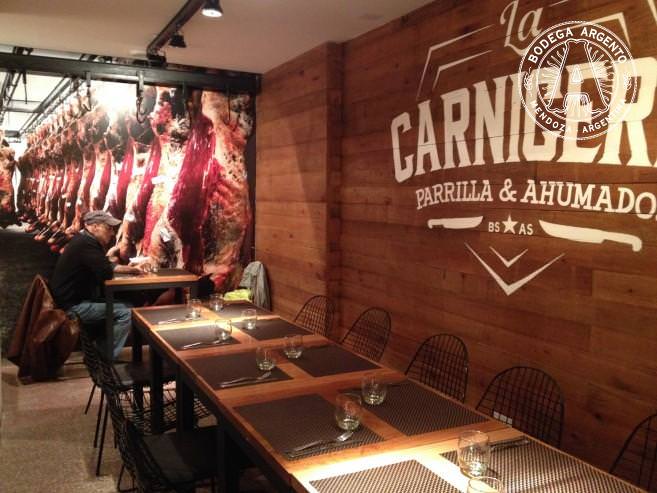 Best of the traditional rest

At Caballito’s Mercado del Progreso, which was founded in 1889, you’ll find eight meat specialists, old-school butchers dealing in something specific besides beef that have been around for donkey’s years. Sweetbreads, Patagonian lamb and kid from Córdoba rule at Nucha Rey de la Molleja who’ve been dealing in meaty currency since 1937, while La Carnicería – chopping up meat since 1958 – pickles many of its wares. If you need a suckling pig, check out La Góndola.

As for purveyors nestled among antique and retro-wear stands, head to Mercado de San Telmo; at Belgrano’s Mercado de Juramento (AKA Feria Modelo de Belgrano) founded in 1891, you’ll find El Corral de Ernesto, which does a fine line in chorizo and morcilla, and Valenti, where the charcuterie started life with its original store (cold cuts only). 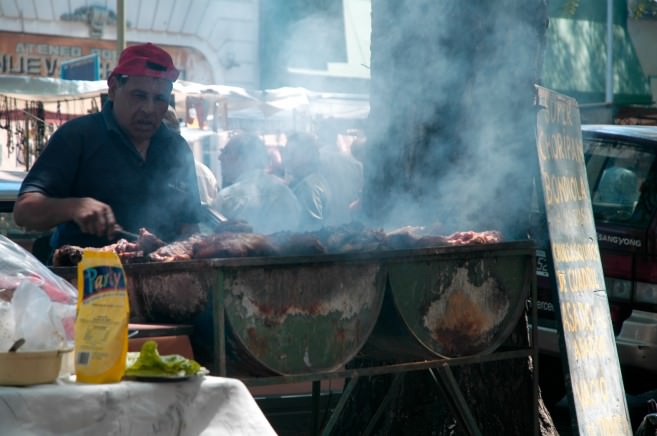 Asado in Mataderos by cnadia

2 responses to “Discover the Art of Butchery in Argentina”