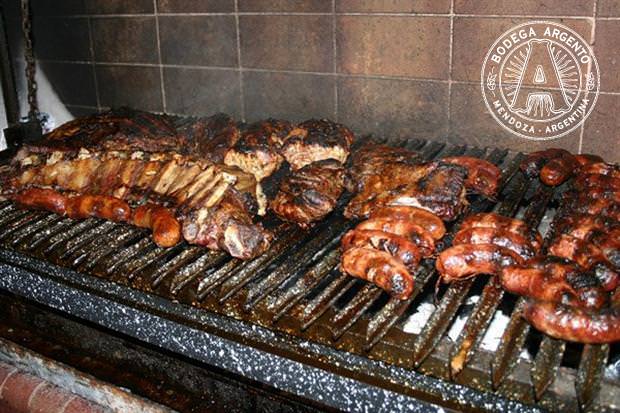 Granted, it doesn’t help that chinchulines look exactly like what they are; namely the small intestine, but these little innards are an indispensable part of that indispensable Argentinean experience: the asado barbecue.

Closing your eyes is one tactic. Another is to quaff enough Malbec to not really care what you throw down your throat. But those who do have the, er, guts to order dangly bits of cow will be rewarded with a tasty treat, or at least a good story to tell your mates at home.

Eating an asado without being first served offal is like fish without chips or curry without poppadoms. It is a testament to the excellence of the entrails that many Argentines will actually forego the best steaks in the world for a dinner of only achuras (offal).

The Argentine affinity with entrails goes back to the days when the gauchos could eat as much as the cow as they wanted as long as they left the valuable hide. Pioneering the, not particularly complicated, method of slicing a cow down the middle and stringing it up over a fire, the hungry horsemen ate tasty parts of bovine that have now become Argentine delicacies.

Offal comes in three categories: bits that sound disgusting, bits that look disgusting and bits that are disgusting. This of course is highly subjective. But on the smorgasbord of curiously unidentifiable looking meat you are sure to find something absolutely divine.

The most popular starter is the aforementioned chinchulines (chitterling). The common serving method is to barbecue them until it is crispy on the outside and mushy in the middle. And when they are crispy they are superb, but undercooked they are largely unpalatable. They are usually served at the beginning of the meal. La Brigada (Estados Unidos 465, San Telmo, 4361 4685) is particularly renowned for their kid chinchulines. Similar to chinchulines, although not as common, is tripa gorda (large intestine) is also common.

If I am being honest, the next cut of beef is one of the reasons I returned to Argentina after a few years back in the UK. Sure I missed the wine, the football, the gregarious Argentines and thrilling social life, but, to pick an entirely arbitrary amount, these reasons perhaps accrued 50 per cent of the reason. The other 50 per cent? Molleja. And the scary thing is, I’m not exaggerating.

Known as sweetbreads in English, molleja at their best are the finest item on the menu and often more expensive than a Flinstone-sized steak. Deftly ignoring their biological names (and functions), squirt a little bit of fresh lemon over and prepare your tongue for a very lovely couple of minutes. Molleja always comes from veal and there are two cuts, one is the thyroid gland from the neck, and another rarer and larger cut is from around the heart. The best way to describe them is having the texture of a scallop, with a mild hint of offal and meat. I could go on about them more (and do regularly), but do try them. Said to be one of Diego Maradona’s favourite restaurants, El Pobre Luis (Arribeños 2393, Belgrano, 4780 5847), offers excellent mollejas. And La Cabrera, which every visitor to Buenos Aires should visit (Cabrera 5099, Palermo Viejo, www.parrillalacabrera.com.ar) serves heart molleja in steak-sized portions. 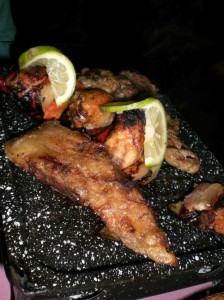 More familiar to most visitors’ palate is riñon (kidney) and hígado (liver); being cooked on the grill leaves an intense smoky flavour. There are, however, some cuts that even Argentines – carnivores in the truest sense – may have problems stomaching. The brains (sesos), udders (ubre) and a certain other gland are all available if you are willing to hunt a bit. But chances are you had all this in yesterdays chorizo.

The achuras are often an appitizer to the main course of meat. But there is much, much more to Argentine meat than the usual steak – which certainly isn’t the most popular cut on the menu.

This guide gives the detail on a menu:

Asado de tira – beef ribs. Probably the most popular cut, it is fatty, chewy and often considered the tastiest part.

Vacio – flank. Another very popular cut (the best in this bloggers opinion) isn’t the most tender, but you can taste the happy cow.

Bife de chorizo – Strip loin steak. If you ask for a steak, this is what you’ll get. It is often sold by the gram, 400g being the usual size. It is tender and with a delicious layer of fat.

Bife de costilla – T-bone. All the cuts are slightly different, but this is the nearest to a T-bone.

Cuadril – Rump. Not as popular as in the US and UK, the rump is tender and meaty.

Entraña – Skirt steak. Like vacio, this thin skirt steak is chewier than bife de chorizo but arguably more tempting. A cut that is becoming more popular outside Argentina.

No plate of meat is complete without the ubiquitous chimmicurri, an oily chilli and spicy sauce. Everyone has their own secret ingredient, but essentials are olive oil, garlic, dried chilli, oregano and salt. It is a rare excursion into spicy foods for Argentines, but much loved and dribbled on most cuts. One proud asador (the guy who cooks the meat – I’m afraid barbecues remain in the realm of men) told me it is ‘como Viagra’.

3 responses to “Offal! An introduction to the best parts of an Argentinean Asado”