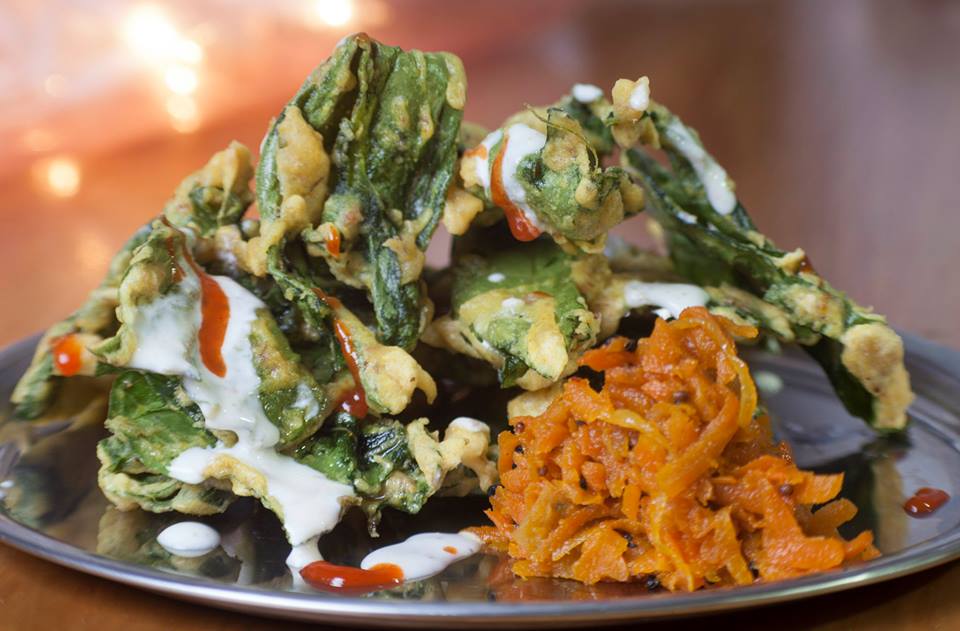 The best chefs of Buenos Aires reveal how to make their restaurant’s most popular dishes. Swiss Chard Pakoras & Carrot Chutney, recipe by Mariano Ramon from Gran Dabbang in Buenos Aires.

If chef Mariano Ramon ever took the pakoras off the ever-changing menu at Gran Dabbang in Palermo, the restaurant’s regulars would totally freak out. The crispy and lightly fried pakoras de acelga (swiss chard pakoras) have been on Dabbang’s menu since the beginning, and were originally added as a way to incorporate an Indian-style tempura element that was also vegetarian friendly.

A popular food found throughout India, Bangladesh and Pakistan, pakoras come in many shapes, sizes, and forms. It can be compared to tempura in Japan or buñuelos in Argentina, all which share a similar fritter-like concept: take a vegetable or meat, batter it, lightly fry it, and serve with some sort of delicious dipping sauce.

“In India, there are so many different varieties of pakoras, it’s a snack you find everywhere,” Ramon tells me. “The chutney-yogurt combination is a classic pair, not just when making pakoras, but in lots of different dish preparations. Our recipes aren’t traditional, but we use the same balanced flavor profiles to season our dishes.”

The pakora not only transformed (by popular demand) into Dabbang’s signature dish, but it started popping up on menus across Buenos Aires. I snuck into Ramon’s kitchen to reveal his secret recipe and attempt to make this dish at home.

Ingredients for the pakoras:

Cooking Method: In a bowl mix the chickpea flour, chili powder, and fennel seeds. Cut the blanched swiss chard leaves irregularly and place inside the dry flour mixture. Slowly add the water, carefully mixing by hand until the batter reaches a thick paste consistency. Lightly cover the swiss chard leaves in the paste, but not entirely. Fry each leaf individually in hot oil, and flip over to crisp each side evenly. Dry on absorbent paper. Salt to taste.

Ingredients for the chutney

Cooking Method: Add oil to a hot pot and fry garlic, ginger and mustard seeds. Add the grated carrots, salt, sugar and cook for two minutes. Then, add the vinegar and the water. Bring the mixture to a boil. Once the mixture is boiling, turn the flame to low and simmer for two hours, or until the mixture has caramelized. Add extra water if necessary. Make sure to taste and correct the sweet-acidic balance by adding more or less sugar and vinegar as needed. Let cool. Chutney can be made in advance and stored in the fridge for 7-10 days)

To Serve: Pile a mountain of swiss chard pakoras on a plate. Place the carrot chutney on the side. Drizzle the pakoras with plain yogurt (raita) and spicy sriracha sauce. Serve immediately.