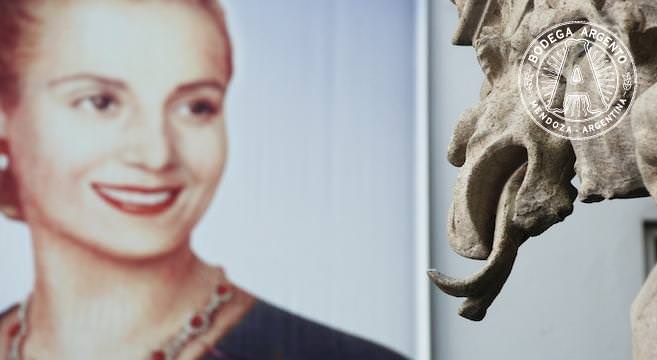 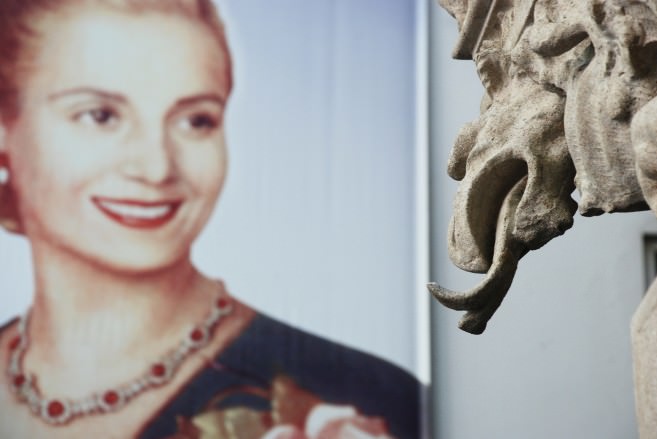 National heroes and champions of workers’ rights on one hand, scourge of the wealthy who often referred to Mrs. Perón as “the whore” behind closed doors on the other, they have undoubtedly left their mark on history. And although Evita once said, “My biggest fear in life is to be forgotten”, there’s little chance of that happening in Buenos Aires. In this guide to the Peróns, you can appreciate them in every way imaginable. Let’s crack on and start off with the Marcha Peronista:

For an immediate insertion into the life of the former first lady, head to the Evita Museum in Palermo Botánico. Previously a temporary shelter for mothers and children set up in 1948 by the Eva Perón Foundation, it opened in 2002 as a museum and restaurant, exactly five decades after she died. Check out Eva Duarte’s early years via family portraits as well as memorabilia such as shoes and clutch bags, dainty hats and half-used perfume bottles from her years married to Perón. Lunching at the restaurant is a must; dip into the contemporary Argentine menu and enjoy the lush patio. It’s a gem of a place in a beautiful setting. 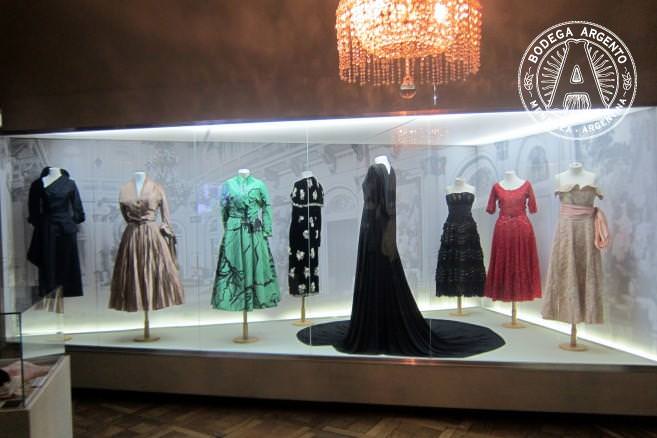 It’s safe to say that any eatery that cranks up the volume to play the Marcha Peronista at sporadic intervals, encouraging diners to bellow along, supports Juan and Eva – and Perón Perón in Palermo Hollywood gets especially rowdy on weekends. Portraits and supportive messages scribbled on walls as well as 1950s TV sets playing back Juan Domingo’s most illustrious speeches make every Peronist feel right at home; there’s even a shrine with candles and flowers dedicated to Eva. 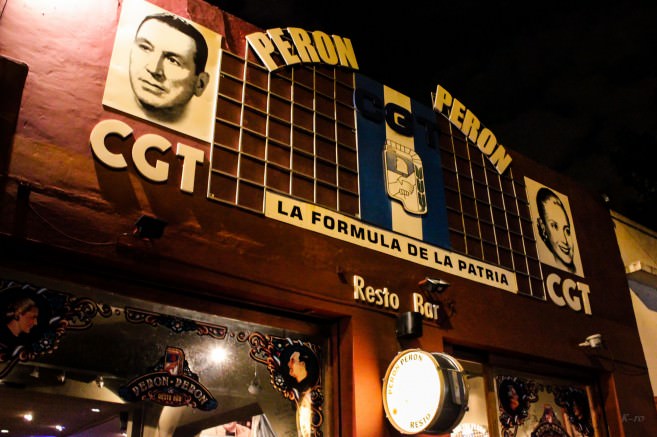 Chef Gonzalo Alderete Pages’ menu is strictly Peronist given that most dishes are for sharing, a pillar of party policy. Try a mouth-watering lamb empanada before moving onto a hearty locro stew or slow-cooked ossobuco. The only wine to sup is El Justicialista, sporting a black label with familiar faces plastered on it. At the back, all kinds of paraphernalia is on sale from Néstor Kirchner penguin wine jugs to badges and posters. Created as a space for young Peronists to gather and debate, this restaurant is a fun insertion into the Peróns’ world, even if wasn’t created in that vein.

Painted the same pig-blood pink as the Casa Rosada, Los Octubres – named after October, the month Peronism was founded – is part café, part store, part parrilla. Stop by the compact ground floor bar for a quick JP beer, the house brand named after the Juventud Peronista (young Peronists), before winding up the stairway past a host of black-and-white shots of the couple in happier times. 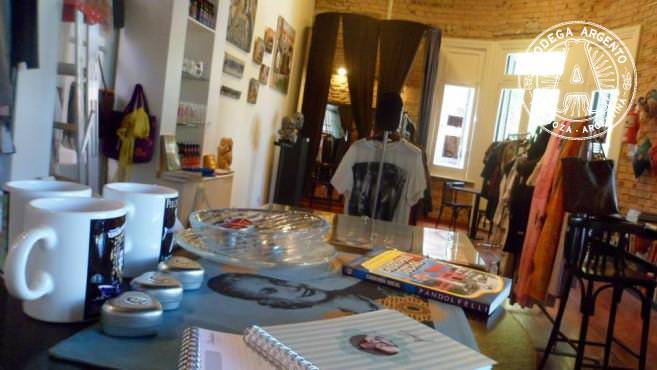 At the first-floor store you can try on Evita-stamped T-shirts and replica jewels, gaze at all manner of knickknacks and pick up a copy of her book La razón de mi vida. At the second floor parrilla, look up – a vast black-and-white Evita mural covers the ceiling. You can even be her for a brief moment: ask nicely and they’ll lend you a microphone to imitate the first lady shouting from the balcony.

That’s right, another museum devoted to Eva’s life’s work. In a similar vein to the Palermo museum, La muestra de Evita, el museo del pueblo which is located just a few blocks from the Casa Rosada, houses an impressive collection of clothes, shoes and hats as well as media from the era. Entry is free.

If all these tributes weren’t enough, a whole town was constructed to honour Eva – in the shape of her face… Ciudad Evita was ordained by Perón in 1947 during his presidency and the quiet town in Greater Buenos Aires retains a sense of pride over its name today. 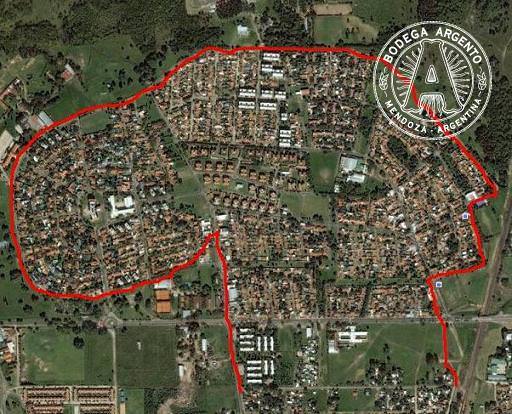 Meanwhile, in December 1951 two provinces went a step further to identify with Juan and his wife. La Pampa changed its name to Provincia Eva Perón, and even named its coat of arms after her, while northern province Chaco became known as Provincia Presidente Perón.

The first port of call is the Casa Rosada on Plaza de Mayo. The first-floor balcony is the iconic spot from where Eva addressed hundreds of thousands of people who lined the surrounding streets. Madonna also posed at the same spot in 1996, after she petitioned then-president Carlos Menem to allow the Evita crew to film there.

One newer landmark is the two 10-metre high iron silhouettes designed by artist Daniel Santoro and sculptor Alejandro Marmo that adorn the Ministry of Health and Social Development on 9 de Julio Avenue, a place where Eva spent a lot of time. Like two sides of a coin, one depicts the tender and loving first lady who also put the workers first; the other, the challenging political vixen yelling into a microphone who got women the vote. 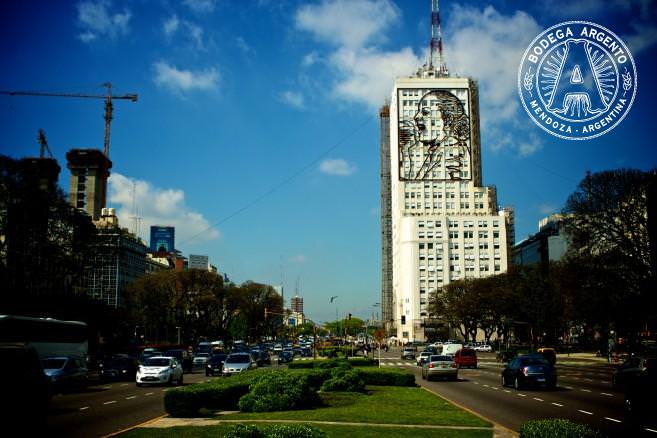 One unexpected place to dip into the Peróns’ life is M in Monserrat. The Nikkei fusion restaurant is built atop a secret tunnel (one of many in Buenos Aires constructed for smuggling, defence and escape missions and prisons) leading from the Casa Rosada to, well, far far away from the Casa Rosada. Ask to see the basement wine cellar, where a glass window in the floor looks down into the damp tunnel that Juan supposedly used to escape Government House during complicated political times.

For a tribute that literally dazzles, check out goldsmith Marcelo Toledo’s Evita Jewels collection. Created for the 2012 Browadway show Evita starring Elena Roger and Ricky Martin. Toledo is the first designer permitted by the Duarte family to create replicas of earrings and brooches. Call ahead to see the collection.

Meanwhile, rather less glamorous homages are Eva Perón Avenue, which runs from Flores out of the city, and Teniente General Juan D. Perón Street which runs from San Nicolás to Caballito.

The Peróns in the afterlife

No tribute to the Peróns would be complete without snapping a few pictures at Evita’s tomb at the Duarte family mausoleum in Recoleta cemetery (everyone does it, and masses of people gather on the day she died, July 26). Juan used to be buried in Chacarita cemetery but his remains were removed to the family estate in San Vicente, Buenos Aires province, in 2006. Now a museum, the Museo Quinta 17 de Octubre, it also houses two statues of the couple, which were decapitated in 1955 following Perón’s demise. The heads were unearthed from the Riachuelo River last year though they have yet to be returned to their rightful bodies.

And ironically enough, while the upper class considered that Eva stole from them to give to the poor, how very dare she, the lady’s profile complete with elegant chignon is now plastered across Argentina’s most valuable bill. The purple-colour 100-peso note came into circulation in 2013, and after a bumpy start (there was an issue with their size, meaning they wouldn’t dispense from ATMs properly), Evita is now part and parcel of everyday spending. 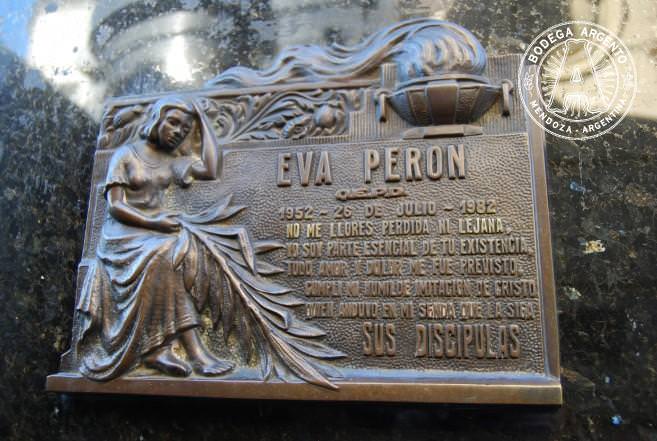 If you like to celebrate history with a drink, as we do, then look no further than this “Eva Perón” cocktail recipe from our good friends at Imbibe magazine. 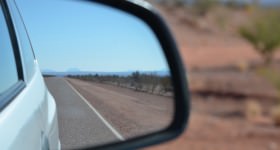 2 responses to “Visit the Argentina of Evita & Juan Perón”