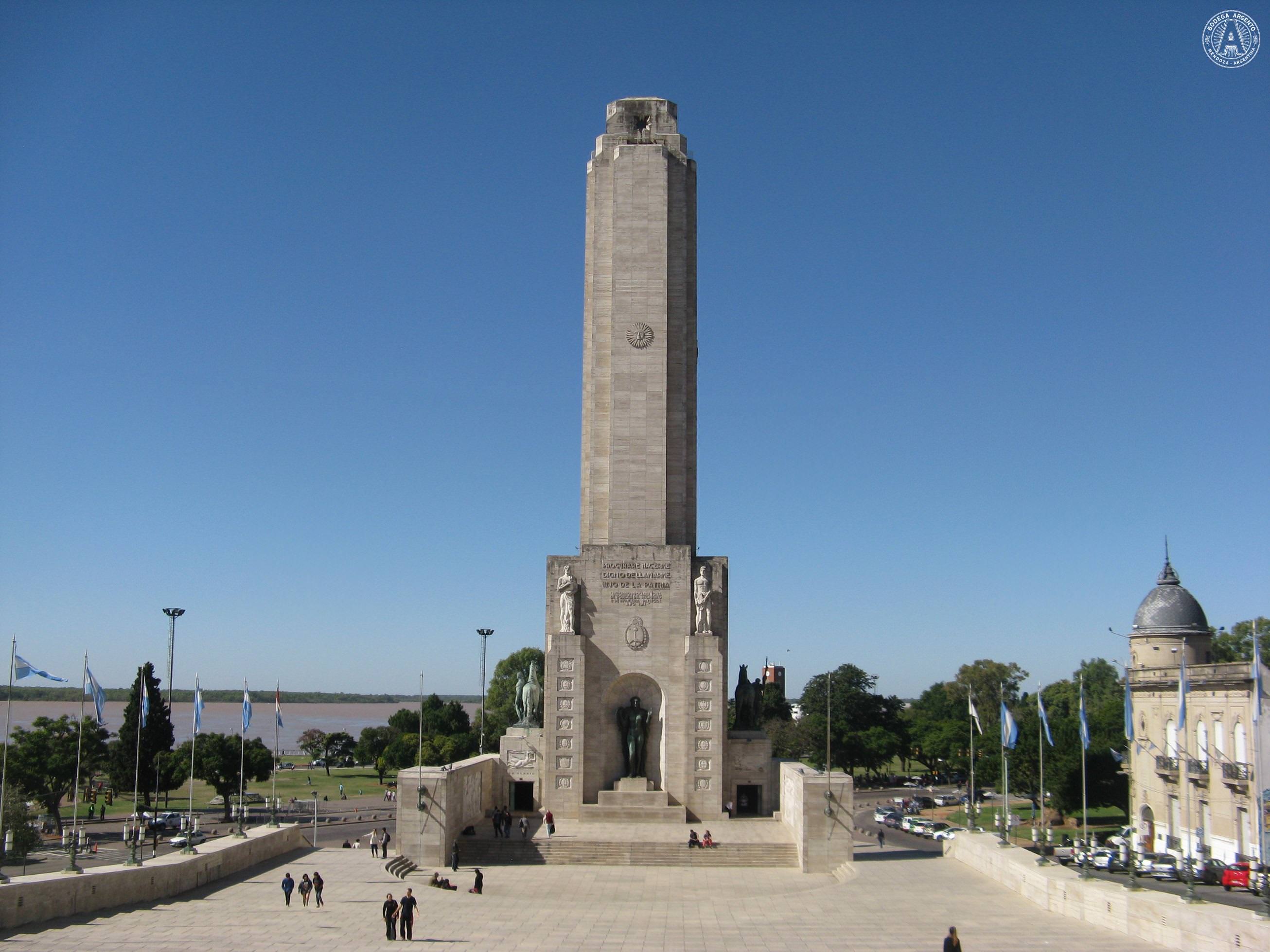 Here in Rosario the Río Paraná dominates the urban landscape, its tea-brown waters setting the scene for riverside dining, drinking, strolling, and chilling out on peaceful river islands. While Buenos Aires bursts with capital city pride, Rosario paddles its feet in the water. Dynamic and confident without being showy, culturally rich and the best urban location to cool off in the sweltering summers, Rosario is easily overlooked but not to be missed.
The third-biggest city in Argentina (Córdoba just pips it to the post of second), Rosario is around 300 km to the northeast of the capital and a four-hour bus ride away. You can explore the main sights in a couple of days but you’ll probably need longer to eat your fill of surubí, get your Rosarino culture fix in a classic bar or gallery, and find your favorite sandy beach on one of Rosario’s delta islands.

Life on the River 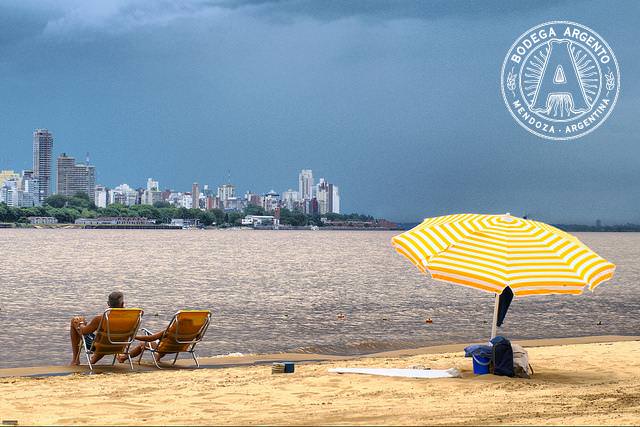 If Buenos Aires is too inward-looking for your tastes, here you can open up your vista to the water. Rosario is proud of its river, the powerful Río Paraná>, and the 15km-long waterfront called La Costanera, once home to derelict warehouses, is now a buzzing destination with restaurants, galleries, bars, and beaches competing for your attention. Wander along the promenade stopping for an ice cream, or to watch an impromptu game of fútbol or musical performance, and end the afternoon with a coffee or glass of wine watching the boats chug past.

La Florida (Avenida Puccio and Avenida Escauriza, at the northern end of the city) has a sandy beach where you can swim, with bars, cafes, and volleyball nets. The brownish water is not to everyone’s taste but in the summer you can wear your swimsuit, catch some rays and cool off with the river breezes. 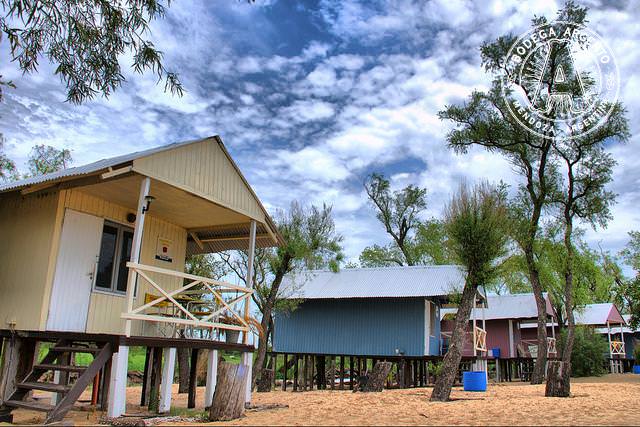 For an even more watery experience, take a boat trip to the islands in the subtropical river delta. Various boats and ferries leave from near the Monumento Nacional a la Bandera to the island beaches, or you can stay on board and take a tour through the mostly uninhabited, bird-filled streams and leave the ice cream stands and the beach umbrellas behind. 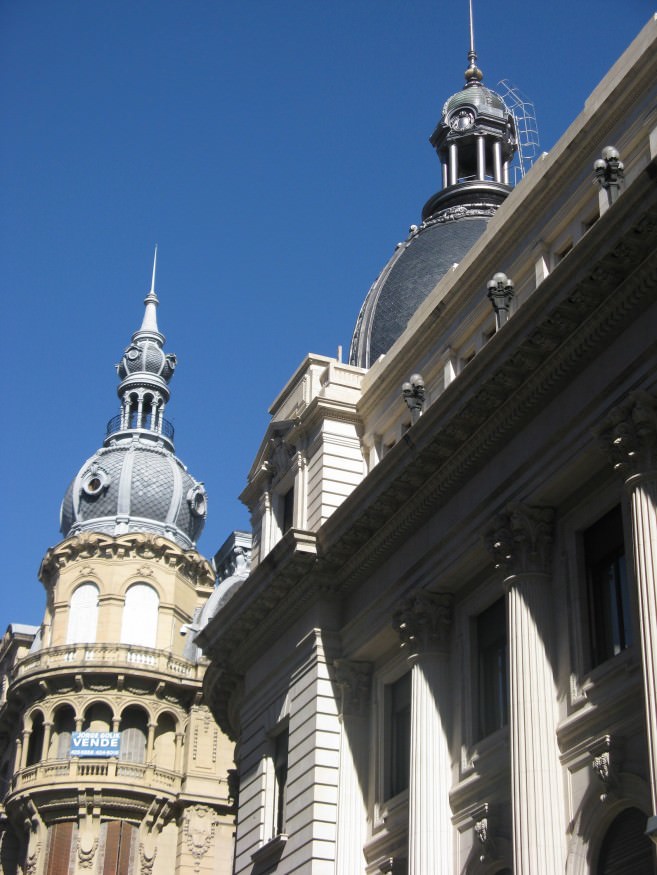 Walk down Boulevard Oroño on a Sunday morning when it’s opened up to pedestrians and you can take in the grandeur of the architecture without the traffic. Rosario is made for strolling on Sundays; the cobbled, tree-lined avenues and ornate, classical buildings boast the splendor of Buenos Aires without the urban chaos. End up at Parque de la Independencia, a busy, spacious park filled with lakes and paddle boats, families sipping mate on the grass, and play areas for the kids.
Outdoorsy children are well-served in Rosario with the adventure-filled Jardín de los Niños inside Parque de la Independencia, the Granja de la Infancia, an urban farm and natural reserve, and La Isla de los Inventos, a science and investigation center for kids big and small.

Rosarinos, people from Rosario, are notably down-to-earth and friendly, and they are proud of their local heroes. Rosario is the birthplace of, in no particular order of importance, Lionel Messi, Che Guevara, cartoonist Roberto Fontanarrosa, popular singers Fito Páez, Juan Carlos Baglietto and Litto Nebbia, and the Argentine flag.

Che Guevara’s birthplace is a modest apartment at Entre Ríos 480 (it’s a private residence so you can’t go in). You can visit the bar most associated with Argentine cartoonist and writer Roberto Fontanarrosa. It’s called El Cairo, on Sarmiento and Santa Fe, is famous for its artistic and intellectual patrons and was immortalized by the cartoonist in his book “La Mesa de los Galanes”. And you will surely notice the birthplace of the flag. 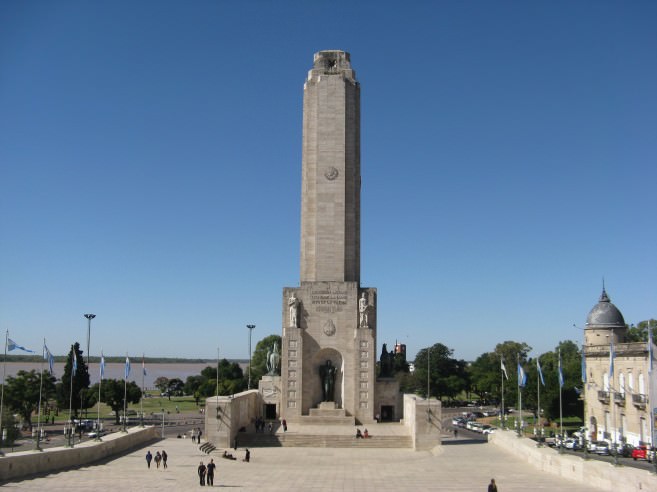 In contrast to images of Che, you’ll see the Argentine flag everywhere you go in Argentina. In Rosario the monument to the flag, Monumento Nacional a la Bandera, is a fittingly monolithic homage. You can’t miss the monument just off the waterfront at Santa Fe and Belgrano, constructed where the celeste-and-white stripes were first raised. The flag’s designer Manuel Belgrano rests in state in a crypt below the obelisk and the flame in the center of the ornate colonnade burns continuously in tribute to those who died for Argentina. 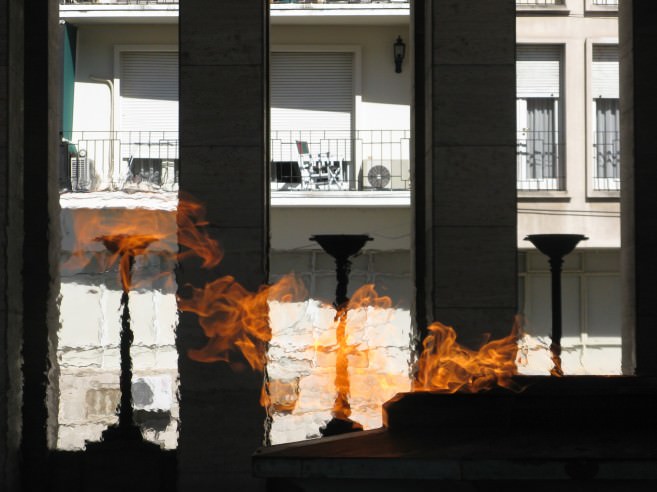 Take the elevator up to the top of the obelisk for sweeping views across the river and the islands. If you can, visit at sunset and sit on the steps while the stone turns orange and the skies darken over the delta.

Rosario is a notably cultural destination and if you want to spend a few hours gazing at works by modern Argentine artists, listening to contemporary music or traditional folk songs, or even just sipping a coffee in an art museum with views over the urban canvas, this is your city.

The Museo de Arte Contemporáneo de Rosario (MACRO) is a vibrant, multicolored edifice characterized by its painted grain silos on the waterfront at Boulevard Oroño. MACRO has exhibitions of young artists and local talent as well as a viewpoint over the islands from the top floor. The Museo Municipal de Bellas Artes on the corner of Pellegrini and Oroño has some fine traditional pieces of art and regularly changing exhibitions.

It’s all about the river fish in Rosario. Think Paraná heavyweights like surubí, dorado, pacú and boga served with hefty salads and masses of bread and potatoes. But if fish aren’t your thing, plenty of other choices abound in Rosario to tempt your taste buds. And to wash down the surubí? Torrontés, of course. And the steak? Why not an Argento Malbec, or a nice glass of Argento Bonarda. Here are a few Rosario favorites to whet your appetite.

La Estancia on the Pellegrini street is a classy parilla with some stunning cuts of meat (and a good selection of fish). While it’s been around for over 25 years, La Estancia still pulls in the crowds to its cavernous dining room (Pellegrini 1510). 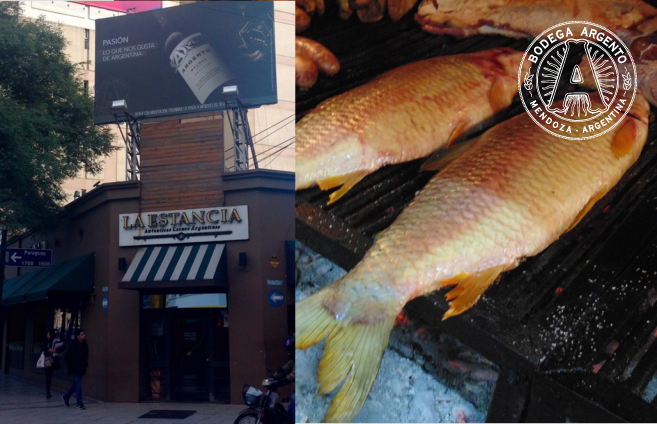 Downtown Rosario, is a lively, relaxed place for unwinding over a chilled beer or a large glass of Argento Malbec from their luxe cava. Also serves a variety of global dishes (Urquiza 1285).

Escauriza is arguably one of the best places in the city to get your fresh seafood fix. Located behind the beach at Florida in the north of Rosario, Escauriza is a spacious place with a legendary fish barbecue (Balada Escauriza & Paseo Riberebo).

The basement of La Marina Restaurant, set close to the flag monument, is papered with old-fashioned posters and serves a wide range of tasty, inexpensive dishes like river fish and rabas – calamari (1 de Mayo 890).

Davis occupies the heart of a glass cube and boasts some stylish riverside seating for a drink or two. The food inside the restaurant is pricy but worth it for the ambience and the freshness of the fish (Av de la Costa 2550). 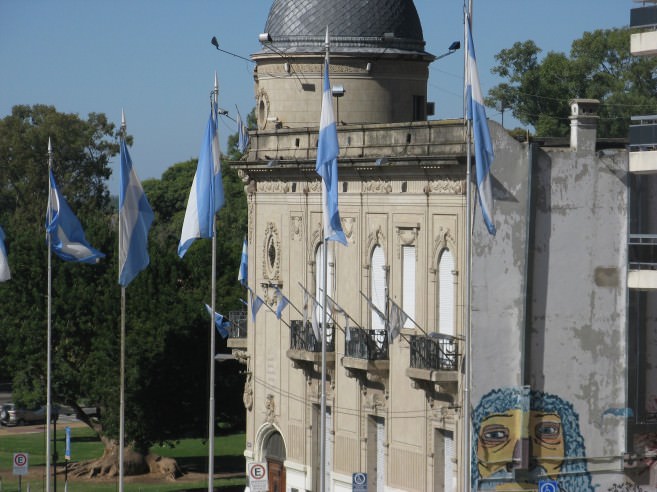