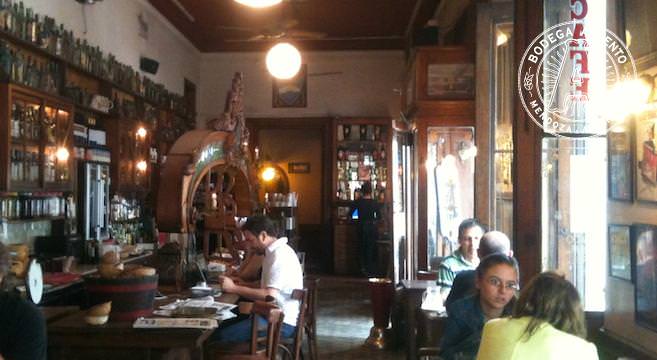 Visitors to Buenos Aires will immediately discover that café culture is an integral part of Argentine society, and while some porteños happily receive their daily caffeine injection from big-name chains, others will only settle for a coffee and dose of tradition from a bar notable.

In Buenos Aires around 70 old-school cafés – living and breathing museums dressed up as eating and drinking establishments – fall under a government protection order, keeping them safe from the evil clutches of global enterprises. Despite this, these cultural heritage sites are not completely untouchable. In 2011, downtown classic The Richmond – a preferred haunt of writer Jorge Luis Borges – was closed from one day to the next to become a sports shop, while more recently Monserrat’s La Coruña has also shut its doors permanently. 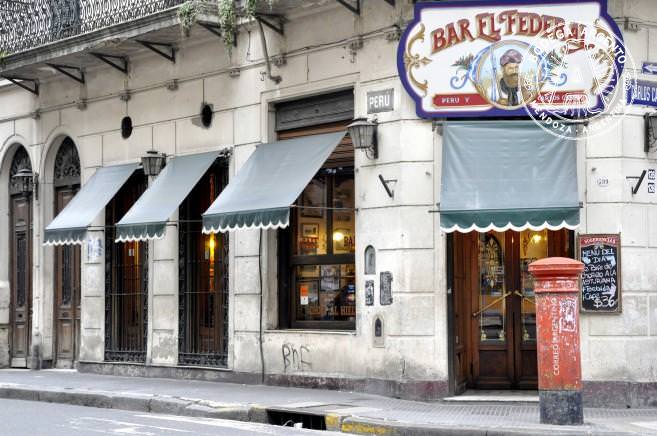 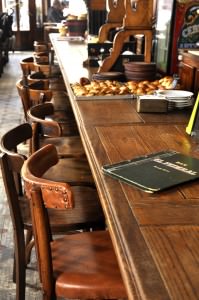 Although El Federal looks like it has been kicking around since 1864, it has been through various incarnations over the past 150 years; grocery store, drinks delivery shop and conventillo hotel form part of its CV. Lovingly brought back to life in 2001, the café has become a new focal point for San Telmo’s residents; some features such as the colourful floor tiles have been restored while others, such as the ancient till and long wooden bar with its tell-the-right-time-twice-a-day clock, have seamlessly slotted into place as if they had always been there. El Federal also has an abundant share of fileteado artwork as well as quirky adverts and pictures from way back when. Skeletons leftover from a killer bout of yellow fever in the 19th century have since been removed from the basement…

Grab a window seat for some opportune people-watching or sit alongside the hanging hams in the back room for a quieter moment. El Federal’s menu is extensive but our tip is the Recuperamos el vermú menu – pick a vermouth-based drinks such as Campari and orange or Fernet and Coke, then watch the substantial supporting cast of 12 tiny tapas dishes including individual slices of ham, cheese, olives and nuts cover the small wooden table. The owners also run four other bares notables including La Poesía nearby.

While tanguistas consider Confitería Ideal to be a dance temple given that it hosts milongas and classes, this two-storey building started out life as a fancy store selling luxurious European-made home wares such as Czech glassware and French chandeliers in 1912, the very same goods that now furnish the café. The glass cabinets that used to display these fine goods are now stocked with tempting cakes and pastries.

While the ground floor is dedicated to morning coffees and afternoon tea, the first is where all the dance action now takes place. In fact, I hold Ideal dear to my heart given that it’s the very spot where I took all five of my tango lessons… and that important information obviously led director Alan Parker to film a segment of Evita at the café.

Besides my accomplishments, Ideal’s century-old history is fascinating: back in the day, its Salón de Té attracted the cream of English society ladies on any given afternoon; in 1930, the crustless miga sandwich was supposedly created by some English businessmen dining on the premises; while former president Juan Perón would order his lunch from Ideal to be sent to the Casa Rosada. In 2014, curious tourists sidle up to a table by the oak-panelled and mirrored walls in the hope of catching some tango, while businessmen casually conduct issues of the day over steaming cortados. 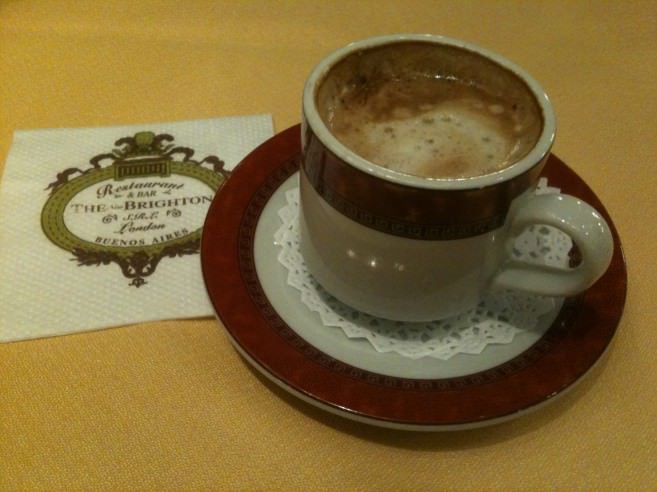 Wait, there’s a café called Brighton in Buenos Aires? Although it is technically located in San Nicolás, The New Brighton is unusually tucked away right in the throbbing heart of the banking district, surrounded by suits and banks. Starting life as a men’s tailor, step through the curved glass door to one of the most wonderful tributes to British drinking culture that exists in Argentina. With the shiniest, most well-maintained of oak bars that could be straight from a London pub, stools are filled by the financially acute from early in the morning anxious for a café solo and a medialuna. Walk through the bar, past the old joanna (better than the average pub’s upright piano given that it’s a grand) and the perfectly polished copper coffee-making contraption to the restaurant and cava at the back, where snug booths give dining companions plenty of privacy: don’t forget to look up at the stunning stained glass ceiling decorated with bunches of grapes.

The New Brighton – which displays (Old) Brighton badger shaving brushes and colognes – is well-versed in old-school everything. From opening the door to pushing your chair into the table, the waiters would probably say “good afternoon ma’am” if they spoke English. A real gem in the busiest of Buenos Aires barrios. 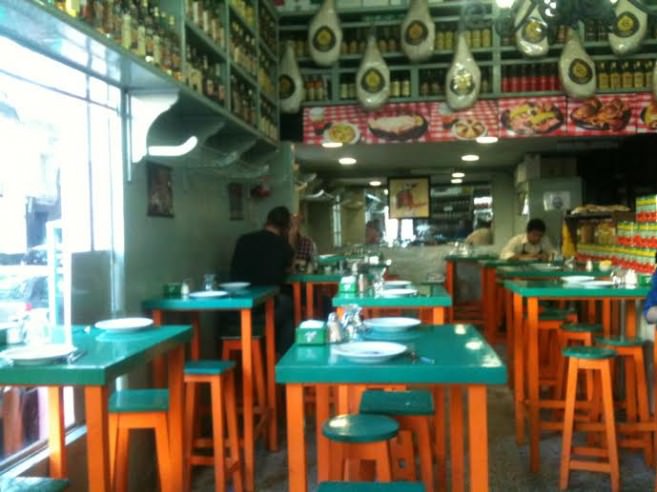 One of the most emblematic of watering holes in Buenos Aires, El Preferido’s reputation precedes it. Starting out life as a grocery store, over the years it has also morphed into a restaurant, belonging to the same family since it opened in 1952. El Preferido’s pale pink exterior is a beacon on busy Borges street for those who prefer the venerable Palermo institution that outshines many hip joints nearby. Pull up an orange stool at a bright green table next to the deli counter and wonder how many stuffed olives are pickling in the jars. Other food items doubling up as décor include legs of ham and vast cans of tuna and pumpkin in syrup as well as bottles of booze that many bartenders would be unfamiliar with. Popular dishes are the squid rings and picadas, which you can dig into deli side or restaurant side. A neighbourhood classic that is still going strong. 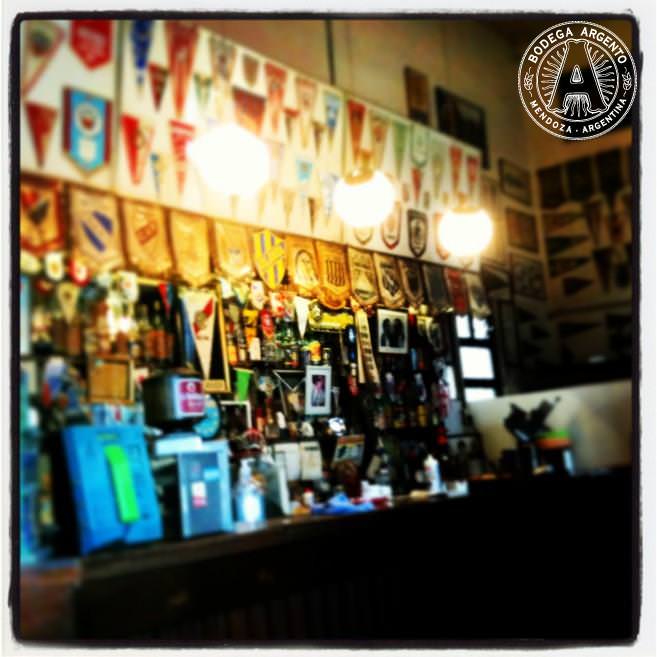 Located on a prime corner on one of Almagro’s most bustling streets, El Banderín is a must for football fans eager to take a step back into sporting history. A cacophony of wood is covered by football memorabilia, with more than 400 club banderines or pennants fighting for recognition in the snug premises; medals and trophies certainly play a lesser role to their more colourful flapping awards. The sporting theme continues, given that presenters from Radio Belgrano transmit a footie show live from their favourite table every Monday night. This bar notable really comes alive in the evening, with tables spilling over around the cross-over streets of Billinghurst and Guardia Vieja, filled with young beer drinkers and elderly regulars who probably haven’t missed an afternoon coffee there since it opened in 1929.

For more information, check out British tour guide Jonathan Evans’ blog in English, in which he is attempting to visit every bar notable in Buenos Aires, or check out these further listings on the websites of the Buenos Aires City government or El Banderín.

2 responses to “Visit the Unique “Bares Notables” of Buenos Aires”