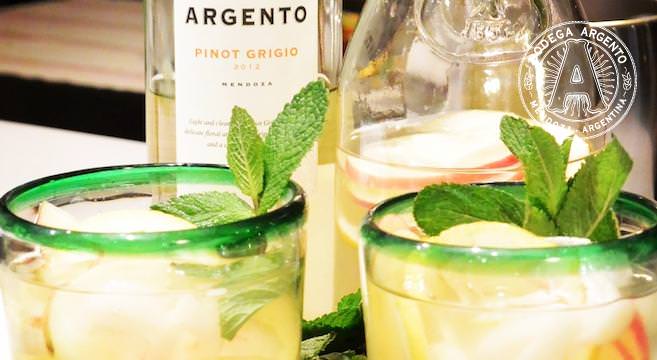 Argentina is a land of innumerable pleasures. That’s why you will find many who say, “Oh, I came here for a month to learn Spanish… That was 6 years ago.” People stay because, every time they think they’re done, something new turns up that just keeps them hanging on.

It could be the meat, the people, the culture, or for many, including me, it could be the wine. Oh, the wine!! Purists may argue that, be it Malbec, Torrontés or Bonarda, wine is never to be touched, tampered with or tarred by any force other than age and temperature, but I beg to differ. Who are they to judge if I, on a hot day, throw a few ice cubes into that glass o’red, or sling some soda into that copa o’white and make a spritzer?

I decided to see if I had some kindred spirits for my love of remixed drinks, and was pleasantly surprised to find out that wine cocktails are actually pretty hot in Buenos Aires right now. Well, metaphorically at least. Most wine cocktails listed on menus are currently served chilled, still clinging onto the last gasps of summer before porteños start squirreling themselves away until next spring. However, the seasons they are a-changin’, and I have it on good authority that the autumn/winter menus will boast warm wine drinks to put the colour back in your cheeks after you come in from the not-really-all-that-cold outdoors.

After slavishly downing cocktail after cocktail for the past few weeks, I have rounded up the best cocteles de vino out there, so as long as the wine is fine, there’s no rules, right?!

The Pope’s Sangria at The Steve

I like The Steve. Set in a big, rustic space, it was created by 6 friends and is akin to a social club, with word trickling down the echelons of cool by osmosis, putting this joint just on the right side of hip. This word of mouth attitude also applies to what’s on offer: the delicious cocktail I sampled wasn’t even on the menu, so keep this between us, guys. The menus of “classics” are short, but made to kick some seriously tasty ass. I was rustled up the simplest, yet most delicious, sangria known to man. Drink it, savour it, believe it. Be sure to head back in winter, when you will be welcomed into The Steve’s manly bosom with a warm wine shot on arrival.

Take a trip back to ye olde immigrant times by stepping through the freezer door of the flower shop in Floreria Atlantico. Downstairs you will find a lavish, clandestine bunker serving drinks from a menu that reads like a geography lesson in tribute our drunken ancestors; categorized by country, cocktails from as far afield as Poland make the cut. I went for the Chichibirra, from the Criollo section. Thanks to the talent propping up the other side of the bar, yesteryear’s drinks have been given a modern twist that would make our Spanish forefathers proud. And full marks for presentation; the drink was so sexy I wanted to take it home. This tipple is a taste sensation of sweet and citrus, balanced by a healthy dash of ginger ale. One word: YUM.

Rey de Copas is a beautiful spot. Owned by the son of the well-known Uruguayan artist Carlos Paez Vilaro, the interior is dripping with eclectic fare by both father and son (also an artist), giving it a Moorish feel and a very singular identity. On my hunt for the perfect wine cocktail, a cocktail with port was the holy grail; it’s rich, European, and very popular in winter where I’m from. So Rey de Copas gets bonus points for serving just that. But be warned, this mother is strong and served as a digestif (a great reason to tuck into their tasty tapas menu!).

Another hit is the Miss Sage at 878, if the others don’t fill the cocktail-shaped hole in your gullet.

If you feel like getting crafty and giving sangria mulled wine a bit of a twist, I, in conjunction with my good friends and boozy benefactors at Argento Wine, have put together a pair of super simple recipes for these classic wine cocktails, using a different wine variety that you can impress your friends with from the comfort of your own home/kitchen/man cave.

Method:
Combine all the liquid ingredients into a big jug with lots of ice. Slice and add the lychees, lemon & apple, and garnish with a bunch of mint for fragrance and share. Easy!

Method:
Mull the wine lightly over a low heat with the orange juice, cider, cinnamon sticks, honey, cloves and allspice berries. Strain into glasses and garnish with orange peel and cinnamon sticks.

If you think you have any more recipes that would trump those discovered on my hunt, please share them with us in the comments below and keep those nay-sayers at bay by spreading the good word of jazzed-up wine!

4 responses to “The Best Wine-Based Cocktails of Buenos Aires”