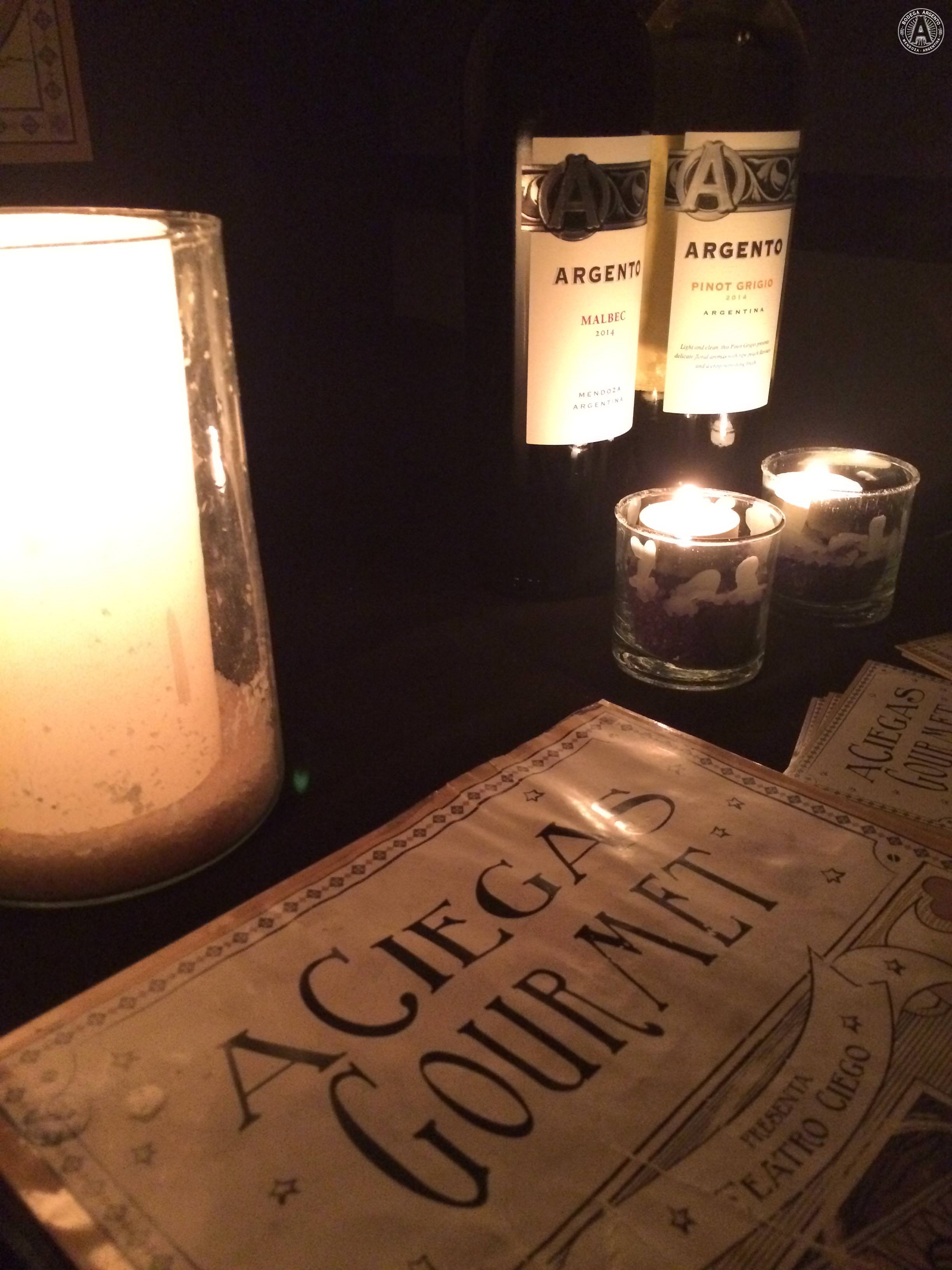 We all like the experience of dining by candlelight but how about dining in the dark, when you can’t even make out your hand when it’s right in front of your face, let alone see the food on your plate? Add some interactive musical theatre to the mix and you’ve got a whole new spin on the concept of dinner theatre. Sophie Lloyd experiences Teatro Ciego’s A Ciegas Gourmet.

A Ciegas Gourmet is an experience like no other that calls on all your senses to get involved, all except that one very important sense, your sight. Plunged into a pitch-black room with a group of strangers, you’re invited to eat, drink and be merry, and become immersed in a theatrical show that plays out blindly around you.

The experience takes place at the Teatro Ciego that’s been producing blind theatre (and by that I mean entire productions performed in total darkness) since 2008 in a dynamic theatre space in the Abasto neighbourhood. And of a troupe of 70 people, 40 percent are blind or partially sighted.

Upon arrival at the theatre one Friday evening, myself and my dinner guest were led up a narrow staircase by a black-suited guy to a small, candle-lit area. Our fellow diners for the evening looked as curious as we were as we stood awaiting further instruction, while hand sanitiser was distributed around. Another equally well-dressed host then informed us that we would be led into a dark room where our dinner was ready and waiting; we were to eat from left to right; there would be a basket of bread in front of us, and a glass of wine or water to our right that would be re-filled on command. We were instructed to line up one behind the other with a hand on each other’s shoulder and allow ourselves to be led through a set of black curtains into total darkness.

Once sitting comfortably at chairs and tables, we were free to start as we pleased. It was our sense of touch that first took a hold of us as we started to feel out our surroundings: the table in front of us, the shape of each of our plates and their contents, and the people sat around us. Then our senses of smell and taste took over as we tucked into the plates of food, each portion a different melange of flavours and textures. An invisible waiter then approached asking us to choose between a glass of crispy Pinot Grigio or fruity Malbec (supplied by Argento Wines) to go with our meal.

Feeding yourself in the dark with your fingers isn’t as hard as it sounds (plus you get to forego your table manners for a night) however, in the absence of any visual cues, working out what you’re eating is harder than you might imagine. But that’s the whole point, and, after a few glugs of wine and mouthfuls of food, the conversation started flowing as it would over any dinner out with a friend and we almost forgot we were in the dark.

Following dinner, the show started. Led by the silky, smooth vocals of a female singer and accompanying pianist, we were taken on a musical journey of different styles from around the globe, interjected with entertaining dialogue, sounds and sensations, whisking us off to different places and scenarios. As the actors moved around the room, occasionally touching us and even addressing us, it was hard to tell how many were involved and what was real and what was not. We became part of the show.
All of a sudden, we found ourselves starting to make out shapes in the darkness. I thought my eyes had suddenly grown accustomed to the dark until my friend pointed out that candles were slowly being lit (D’oh). And that’s where I’m going to stop before I give any more away…
If you’re veggie or have any other dietary requirements, be sure to let the theatre know 48 hours in advance.