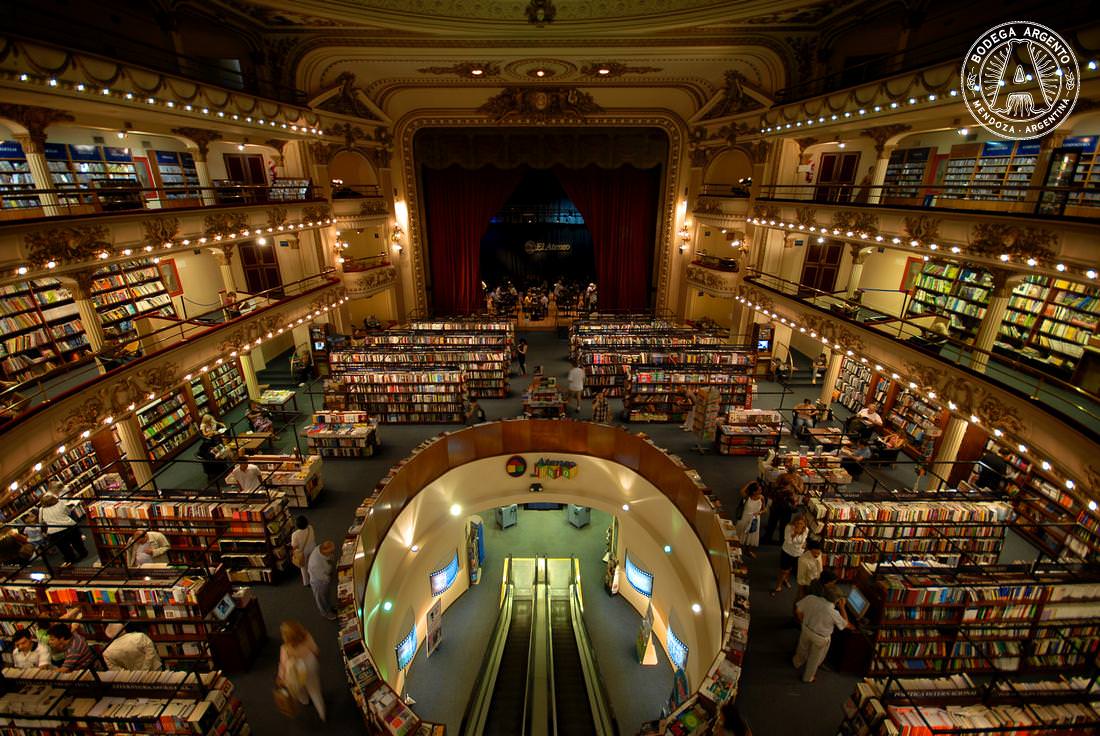 Buenos Aires was recently crowned the bookshop capital of the world, boasting more librerías per person than any other city in the world. With such revered authors as Jorge Luis Borges and Julio Cortazar hailing from Argentina, and the capital’s international book fair, Feria Internacional del Libro de Buenos Aires now in its 42nd year, the reverence for the written word is apparent on every block. But of course some literary temples are better than others. Here is our list of the 5 best bookshops in Buenos Aires.

El Ateneo Grand Splendid is indisputably the daddy of porteño bookshops and has often been cited as one of the most beautiful bookshops in the world. This Barrio Norte wonder opened in 1919 as the Teatro Grand Splendid, when the Argentine capital was at its most glamorous, its lavish interior complete with frescoes and caryatids hosting performances by some of the country’s most famous tango artists such as Carlos Gardel and Roberto Firpo. In the late 1920’s the theatre changed use to become a cinema and in 2000 was taken over by book tycoons Yenny to become its most current incarnation, El Ateneo that attracts over 1 million visitors a year.

El Ateneo is a marvelous space in which to browse, take a seat to read a book in one of the theater boxes or to grab a bite in the cafe which occupies the former stage area (be warned, the prices reflect the salubrious environment). As the booksellers flagship store, they offer a huge selection of titles, mostly in Spanish. The English section is relatively limited, but it’s a good excuse to brush up on the idioma! Check the events calendar to see what’s going on and head up to the second floor to check out the photography exhibitions.

English books can be difficult to find in Buenos Aires, the huge local literary culture meaning that people don’t need to look to other languages to find great writing. However, there is a large foreign population living in the city, and an ever growing number of tourists and travellers flocking to the Argentine capital. Walrus Books in San Telmo is the best place in the city to get your wordy fix in English, and the tiny hole-in-the-wall shop is Buenos Aires’ answer to Paris’ Shakespeare & Co. Books cover every surface in the dimly lit, wood panelled wonderland, and they have a massive range of new and used paperbacks and hardbacks. Travelers can exchange their used books for discounts on their purchases and locals can peruse the newest arrivals online on their Facebook account, which are listed with prices. These can be reserved online as well, ensuring that the edition you have your eye on won’t be snapped up by someone else. They also run literary courses, offering some of the best creative writing workshops, poetry readings and discussion groups in the city, which take place in their San Telmo bookshop and their space in Palermo. Check their Facebook for details on these classes, which are always reasonably priced, organised by fantastic teachers and are a great opportunity to meet some kindred spirits.

Libros del Pasaje is the real deal, a proper bookworm’s bookshop. Floor to ceiling shelves display spines in their thousands, the staff are extremely helpful and knowledgable and the airy atmosphere is conducive to a whiling away a few hours sifting through the array of books they have on offer. The highlight of the shop is the cafe, situated in an enclosed patio around which the rest of the book-laden space snakes. Usually full of people tapping away on their laptops from the early afternoon until the late evening, Libros del Pasaje is the perfect setting to bash out your memoir or finish your thesis. The sandwiches are delicious (get the bondiola or the chicken, mmmmmmm), the coffee will keep the zzzz’s at bay and all are very reasonably priced for the quality and quantity they serve. The couches and easy chairs at the rear of the shop get pushed to the sides to make room for the weekly book presentations by local authors, so you really are in good company in this Palermo Soho oasis. Check the agenda for upcoming events.

Calling itself a “Cultural Factory” rather than a straight-up bookshop, Dain Usina Cultural has much more going on inside its walls than just selling books. A converted colonial style house on a corner in Palermo Soho, the high ceilings and bright interiors invite visitors to browse their selection of over 20,000 books (the art and design section is the most extensive), watch the world go by through the big windows while eating lunch on the ground floor restaurant, wander around the exhibition spaces or lounge about with a cocktail under a tree on the roof terrace. The ethos of Dain is to create a space that celebrates culture in all its forms – through literature, art and music (concerts often take place at the weekend). Short courses, lecture series, book presentations and talks are all held on a regular basis in the ground floor space of the shop. Check their website for more details.

A stone’s throw from Dain Usina Cultural and Libros del Pasaje, Eterna Cadencia prescribes more to the “shop/cafe” model of literary enclaves. A warm and welcoming interior gives way to a plush restaurant and bar in the inner courtyard, while the surrounding bookshop is interspersed with armchairs and reading tables. There is also a “living room” area styled with couches and Moorish light fittings, making you feel right at home in this comfortable and spacious Palermo haunt. Again, book presentations, readings and classes are all offered here, so check the website to see what’s coming up.