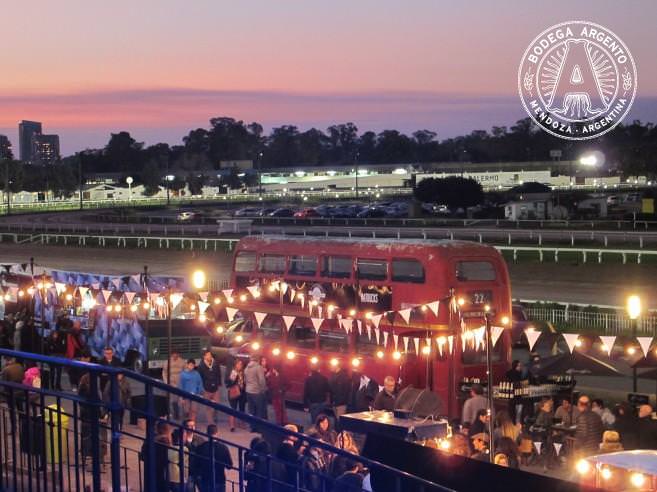 Buenos Aires’ streets are about to get a whole lot tastier. The first ever gourmet gorge fest on wheels, aptly named, Luxury Food Truck Station, has hit the city. Hosted at the back of an outlet shopping centre overlooking the horse race track at Hipódromo de Palermo, at first glance you’d be mistaken for thinking there wasn’t much munching to be done, but walk around the back and the food trucks are belting out much more than the típica bondiola butties (typical pork shoulder sandwiches) from their vintage Volkswagens.

Food in a van isn’t exactly a novelty here though. If you have a weakness for meat in bread you’re spoilt for choice with the snack of Porteño Kings, a humbling, comforting and cheap as chips choripan. It’s a porkchorizo delight in a bread roll, served up in parks and street stalls everywhere. No stay in the city’s complete without chomping the chori right of passage along the Costanera Sur esplanade, but snacks outside the sausage variety are slim pickings of omnipresent pizza and empanadas (pastry stuffed parcels). In this dearth of diversity sometimes you hanker for something a little more, dare we say it, sophisticated, with a little less grease guarnicion (side order). Hail forth for the food truck revolution entonces!

This weekend (25th-26th July) is the last chance to catch the taste making trucks in action, for now at least. Taking the batton from the country´s beloved boutique food fair Masticar, some of Palermo´s popular restaurants are represented in the form of Trixie´s Diner dealing out burgers and Maria Felix´s hot Mexican dishes to keep the frio (cold) at bay. There´s even an original double decker London bus which doubles up as a bar, though you can´t sit on it, which is a bit of a tease. Expect cultural food mingling from arabic to mediterranean and healthy veggie appetites are catered for too. The French connection’s well represented by Bon Bouquet´s yummy crepes, alongside The Crème Brûlée Company and Queso Brûlé de Justine (find them at the Buenos Aires Food Market). The former blow torch desserts before your very eyes and the latter similarly with gorgeous gooey artisenal cheeses.

Incidently, Bon Bouquet are so far the only truckers with a permanent stand in Buenos Aires. Catch these crepes downtown on calle Bouchard 710, tucked in front of the car park of a giant office block. Sexy location? No, but who cares when you have your mouth stuffed with something so delicious. Hopefully we´ll see these guys in a more public spot pronto.

Our advice is to get to the Luxury Food Truck Station a little before sunset. Get stuck into something tasty and take a seat under the chains of white lights where you can snuggle up next to one of the fire drums as the DJ gets you warmed-up for a night out. 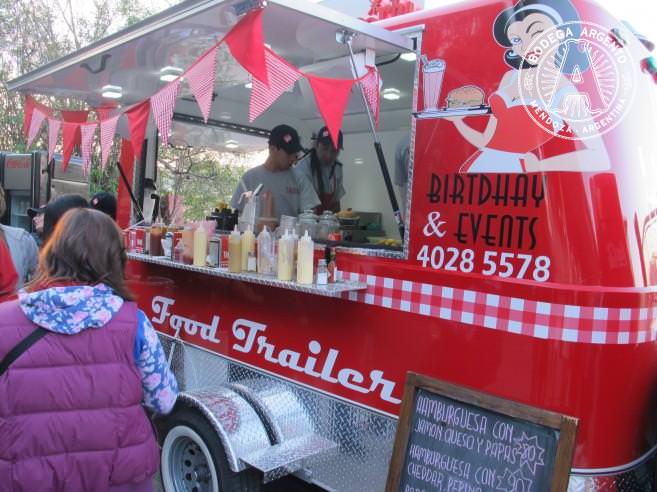 Who doesn’t love a burger? Especially when it’s served up on these wheels! – Photo by Sonja D’cruze

When is the revolution coming?

It might come as a shock that Food Trucks haven’t been exploited here before, the weather’s perfect, plenty of busy Porteño panzas (stomachs) to fill and street service makes prices cheaper than café bars. The truth is, it’s such a spanking new idea here that no licensing laws exist to cover such events, meaning that they can’t happen now unless, like the inaugural Food Truck fest, they get the go ahead with temporary contracts on private land. The good news is that three food truck ventures are currently in debate with proposals put forward by the main political parties and those in the industry are hopeful they’ll be given the green light to get out on the streets in the next few months.

Where there’s a Porteño attitude there’s a way! Getting around the licensing laws of selling food on four wheels, some local culinary genios (geniuses) have adopted a bike as their vehicle of choice to peddle their delights from.

My favourite Saturday (not so) guilty pleasure is joining the Cannoli worshippers that queue up to buy handmade Italian delicacies from Fiona and Facundo of Cannoli de Palermo.

Hooked on their first taste of cannoli in Sicily in 2012, the couple soon started crafting their own versions by trial and error. A vintage bike was bought and they soon started selling their Italian sweet treats around the Palermo parks. Months more experimentation by Facundo saw their range expanding to include sfogliatele(see below) and soon they were in hot cake demand selling pastries to cafes including Palermo barrio(neighbourhood) favourite Lattente, who invited them to pitch up a spot and sell outside their café. 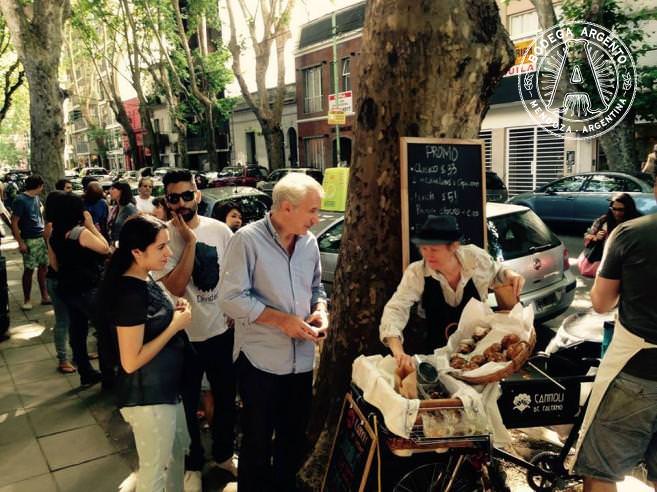 It’s notorious for those in the know that Saturdays mean only one thing now, Cannoli at Lattente. “We seem to becoming a little famous, at least in Palermo,” says Fiona, “…although people do travel from outside Capital to get them. Queues are now common on a Saturday from 3.30pm until we sell out.”

What do they sell?

Cannoli´s are the staple of their wares. Crisp tube shaped shells of fried pastry dough filled with a rich citrus infused ricota cheese. Dunked in crushed pistachio nuts on one end, chocolate shavings and candied orange peel on the other, a dusting of icing sugar polishes it all off and makes them look too good to eat. But trust me, you must eat them!

Sfogliatele – a fine pastry shaped shell filled with a sweet vanilla creme pastelera. Translated, the name means small, thin leaf/layer as the pastry’s texture resembles stacked leaves. I recently tried one of these bad boys fresh and warm from the oven, dangerously good, glad I came on my own bike.
Other lush pastries are offered weekly to keep tempting you back. 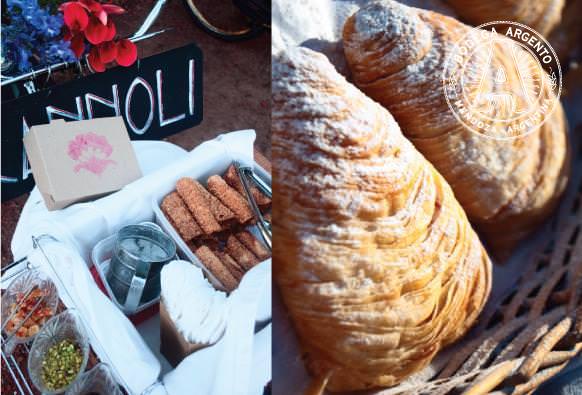 Saturdays from 3.30pm, Lattente:Thames 1891 (weather dependent so check the Facebook Page if in doubt.)

Sundays from 3pm at Felix Felicis & Co: José Antonio Cabrera 5002. Check the Facebook page to see if the bike will be there as this is a less regular gig.

Sheikob’s Bagels on a bike 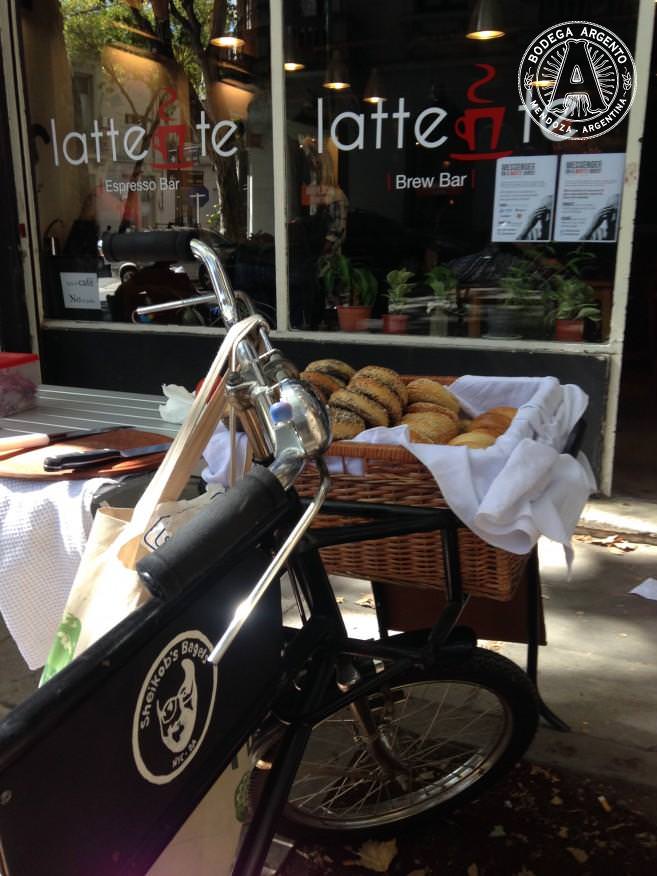 Finding a genuine bagel in Buenos Aires was like looking for a bife de chorizo in a veggie restaurant for New York born and raised Jake. Drawn back here after a stint studying in 2009, he decided this gaping bagel hole had to be filled.
“It was a food I had grown up on and that I associated strongly with family and home. So I got on the internet and started researching.” With a bit of help from his friends about the rudiments and traditions of making good bread, including the use of fermented starters, specifically masa madre (sourdough), he took his bagel amor (love) to the next level, “It was at this moment I realised the depths of bread baking; the fact that you are working with a living thing, highly sensitive to its surroundings, and ever evolving. At that point I was hooked.” 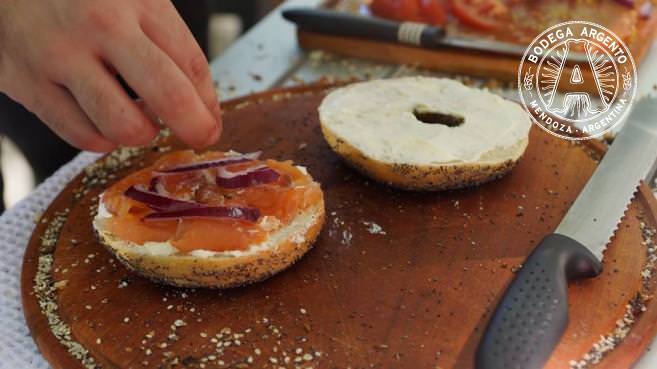 The relationship got serious when he started selling regularly and invested in a dedicated oven and fridge for bagels alone. He also bought his own wheels after lending the Cannoli de Palermo guys’ bike and now sells outside Lattente on Sundays. “It put me face to face with my customers, which I immediately fell in love with: getting to see people enjoy my bagels, but more importantly being able to chat with them, both from the perspective of having an opportunity to more explicitly share my culture, but also getting a chance to share theirs.”

What do they sell?

Err..bagels! Lots of them, seeded sorts of all varieties and toppings of his home made cream cheese, red onion, tomatoes and smoked salmon.

Lattente every Sunday from 11:30 until he sells out (usually between 2pm – 3pm).
LAB Tostadores de Cafe sell Sheikob´s bagels all week long and he takes personal orders by the dozen for delivery every Friday. Place orders by Wednesday of the same week.
Sheikob´s bagels is currently on holiday, back 23rd August.