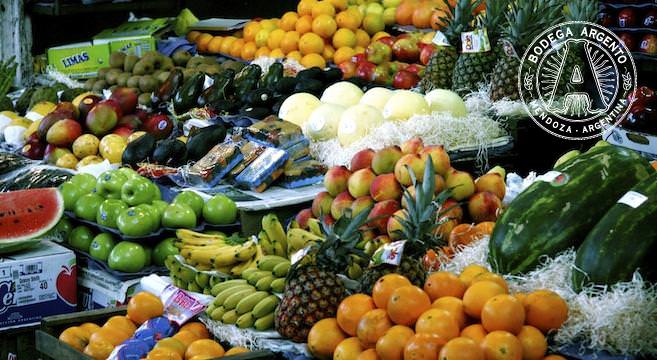 It doesn’t matter what kind of cooking magician you may be, it’s nearly impossible to whip up a great meal without starting with a fantastic product. Fresh, high quality, in season, and carefully treated with respectful and passionate hands, 80% of creating wonders in the kitchen commences with a killer ingredient. Amateurs, professionals, home cooks or chef wannabes, if you follow this guide of where to buy the best food Buenos Aires has to offer, there’s no excuse not to surround yourself with an edible dream team. 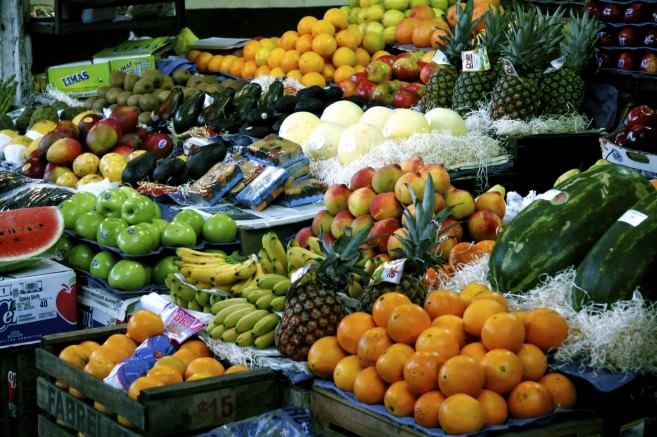 There’s nothing more depressing than heading into a Vea supermarket and picking out a piece of old greyish-colored steak to cook up for an asado. In the land of beef it’s crucial to go to the prime carniceros who are masters at their craft. AMICS (Santa Fe 5202) brings the Argentine meat market into contemporary times. The owner of the pristine beef boutique, a former chef, has the cook consumer in mind selling prize worthy flawlessly butchered cuts. I even had the chance to watch him break down the vaca live, and it was truly a giddy Christmas-morning experience. The Mercado de San Telmo (Bolivar y Carlos Calvo) and Mercado de Progreso (Rivadavia 5430) have been long time barrio favorites for delivering ultra fresh beef from butchers who are the ultimate professionals. In Caballito’s Progreso market, head straight to Nucho (puesto #127), aka the King of the Sweetbread, who also sells a noteworthy tapa de nalga (top round cap) marinated in herbs and Cinzano. PIAF (Dorrego 1605) offers a massive variety of quality meat (at a fair price) that go far beyond the standard cuts – think deer, jabalí, llama, buffalo, etc. La Granja Converso (Lavalle 3501) is my go-to Thanksgiving spot to pick up a massive fresh free range turkey from Cordoba, while a few blocks down a kosher friend hooked me on the Halal beefy marvels from Assalam the “Islamic Butcher” (Medrano 394) and Carnicería Al-Baraka (Azcuénaga 766). 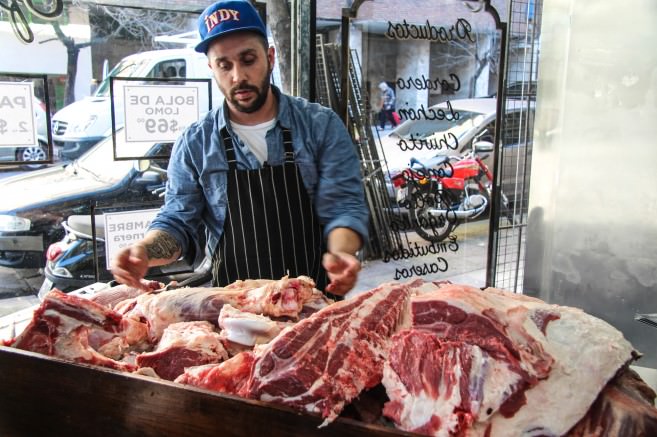 The butcher at AMICS; photo by Allie Lazar.

The Cheese and Cured Meats

We’d all live in a much happier world if people ate more cheese and cured meats. While the selection and quality in Buenos Aires can be somewhat lacking, there are a few gems amongst a sea of processed bright orange cheddar. Italian style Valenti in the Mercado de Belgrano (Ciudad de la Paz y Juramento) never fails with an impeccable pecorino, meanwhile Franco Parma is like a cheese wonderland that sells real British cheddar. I used to live a block away from Don Cosme (Cordoba 6317) and it became a serious afternoon addiction. The Pick Market always has a good mix up of high-end cheeses and meats, as does barrio favorites La Tablita (Vidal 1726), A Manger (Charcas 4001), and Reale Gourmet (Pueyrredon 2054), which also sells homemade burrata AND maple syrup. Those who are fans of the Sunday Feria de Mataderos (as you should be), don’t forget to collect some homemade salamis from Tandil or a queso de campo flavored with spicy pepper flakes. Need some extra guidance in the cheese aisle? These are the Argentine cheese brands to look out for and live off of: Cabaña Piedras Blancas, Fermier, La Suerte, Las Cabrillas, Pré Vert and Wapi. 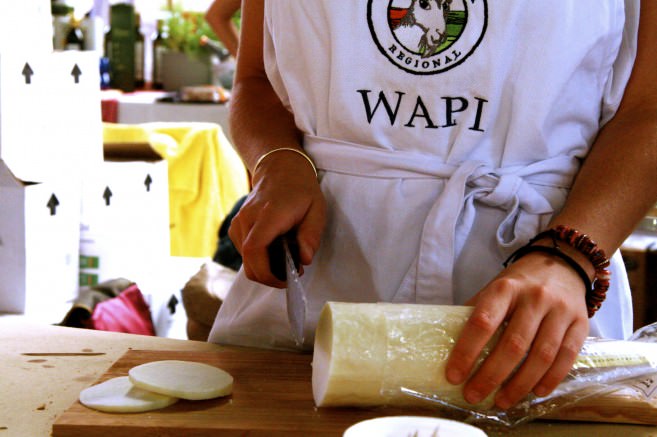 Cutting the queso at Wapi; photo by Allie Lazar. 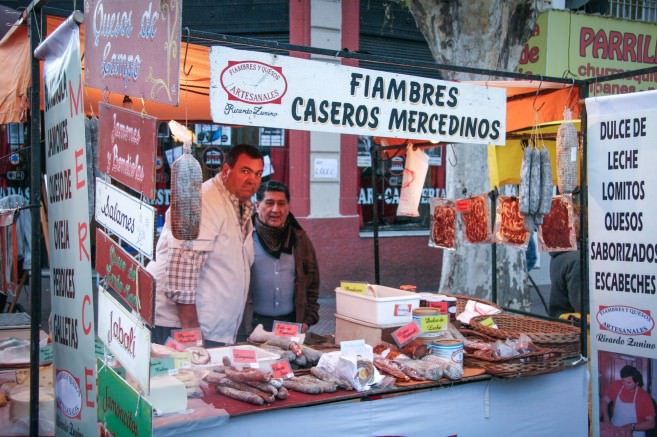 For those who are a bit organic obsessed, you are in luck. Tallo Verde’s online grocer specializes in organic fruits and vegetables, which are delivered to your door in dazzling box that makes you actually want to eat your vitamins. Healthy spots like Buenos Aires Verde (Gorriti 5657), Bio (Humboldt 2192), Smooothway (Soler 6036) and El Rincón Orgánico (Bulnes 910) double as restaurant/cafés and mini organic stores. The markets are the true mecca for organic products. Probably the most popular, the warehouse at El Galpón (Federico Lacroze 4171) transforms into an organic shoppers dream on Wednesdays and Saturdays with providers hawking cheeses, eggs, poultry, meat, and vegetables. The Mercado Solidario Bonpland (Bonpland 1660) is stocked with a solid selection, as is Mercado Sabelatierra on Saturdays in the northern suburbs. And of course in San Telmo on Tuesdays and Fridays there is the San Telmo Verde Feria Orgánica (Peru 677) where it’s key to pick up your organic goody bag with eggs, chocolate, beer, and salamis.

Note: There may not be many certified organic products in this country but in reality a lot of produce grown in Argentina would probably be considered organic if it grew in other countries. Obtaining organic approval can be an expensive and a tedious task, so many places don’t go through the process. 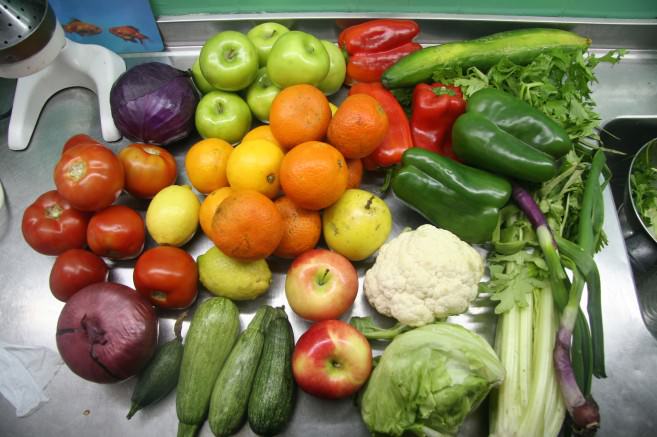 Finding a great verdulería isn’t such a hard thing to do. Walk around your neighborhood and tuck into a small hole in the wall displaying beautiful produce that should be hanging in the MALBA. Typically Peruvian and Bolivian immigrants man the shops with superior quality produce – these are the spots where you will find more “exotic” (for Argie standards) ingredients like spicy rocoto chili peppers, plantains, mango etc. For mass quantities of the freshest fruit and veg, head to Barrio Chino, Mercado de Liniers, Mercado Central, and a Feria Itinerante de Abastecimiento Barrial. Vegetable and fruit delivery service La Barata del Central is also excellent – fair priced produce boxes delivered right to your door. Also, I recently discovered that Almagro is the wonderland of the verdulerías where veggie markets are plentifully concentrated within the barrio radius. 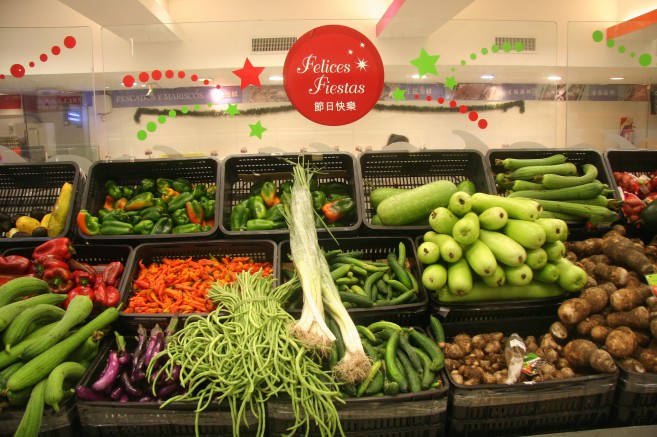 A verdulería in Barrio Chino; photo by Allie Lazar.

I used to think a dietética was a gloomy health food store filled with mothballs, diet drinks, and stale sugar-free granola. But in Buenos Aires a good dietética should become your BFF. It’s a place where hard-to-find products, imported sauces, herbs, spices and baking goods intertwine. Casa Polti, which has been around since 1929, has a great selection of baking products, as does Dietética Dulcinea (Forest 502), Casa Naturista (Serrano 1321) and the double whammy dietéticas on Gascón (Gascón 931 & Gascón 894). Café notable El Gato Negro (Corrientes 1669) takes us back in time to the old school BA almacén with wide array of spices. Celiac-ers (or those who fake a gluten allergy): Celi Gourmet (Thames 1633) should be your go-to gluten-free grocer. 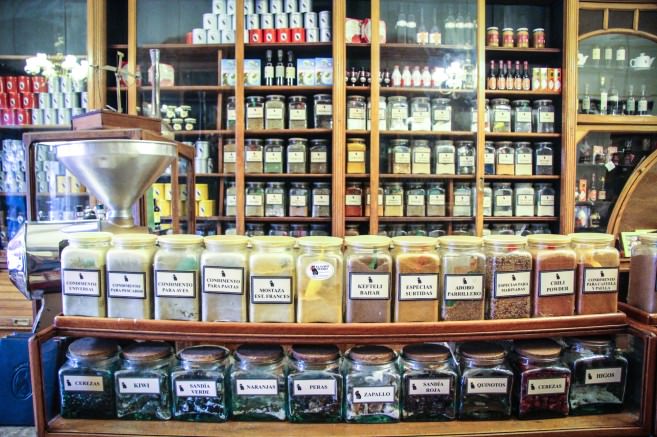 Often times I’m in the need for a ‘lil bit of everything – a sprinklin’ of Indian spices, a few dashes of Asian sauces, some oysters, Dr. Pepper, peanut butter, fish heads, wine in bulk, chicken feet – you know, the stuff normal people shop for. When I’m on the prowl for that multipurpose one-stop shop that will not let me down, Barrio Chino is the first place on my list. Market crawl down Arribeños and Mendoza streets to Asia Oriental (Mendoza 1661) Casa China (Arribeños 2173), and Ichiban (Arribeños 2257) for the Asian persuasion and imported ingredients galore. New to the world of international products, Tina & Co (Mendoza 1678) is part Chinese supermarket and part international gem palace filled with finds like Lindt chocolate, imported beer, and overpriced cans of Mountain Dew. Take laps around the mercados – Belgrano, San Telmo, Progreso – for fish-veggie-spices-meat-poultry all in one go. My all-time favorite go-to hub? The hidden Bodega Amparo (Darwin 1548). I’ve never left this place without some sort of brilliant wine, liquor, spice, cheese or meat. 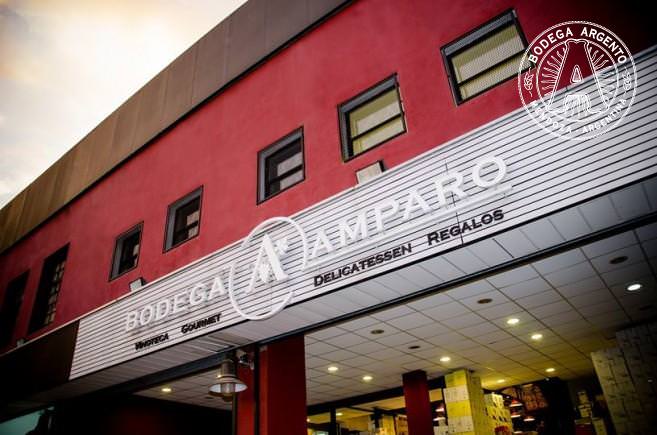 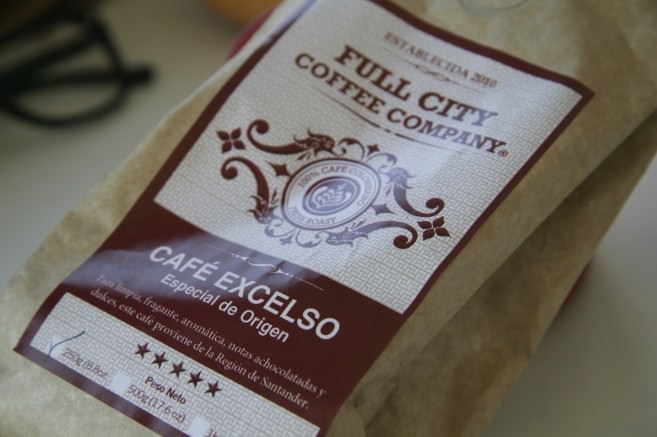 Can’t find a decent version of your favorite nostalgic staples from home? Make it yourself. Or find others who have already gotten their hands sucio with a local version. Say goodbye to yucky rapiditos and get the legit Mexi stuff from Pancho Villa Tortillas that delivers corn and wheat pre-made tortillas (or the masa to make it yourself), mole and salsas. It’s also essential to find your preferred mouth burning picante. Cocina Sunae’s Thai chili sauce causes intense spicy cravings, and it’s especially the hotness since it’s made from imported Thai chili seeds that grow on the rooftop of the Southeast Asian closed-door restaurant. El Tejano has been bottling a family of sauces for a while, including a spicy salsa verde made from green jalapeños and locoto peppers and a salsa roja that is made from the same red chili varieties. It’s no longer difficult to find peanut butter in Buenos Aires, but great peanut butter is harder to stumble across. Mil Mantecas makes a smooth, local, all natural manteca de mani that only contains peanuts, peanut oil, salt, and a touch of sugar cane. And for all you cookie, brownie and bagels monsters, Sugar & Spice is like your cookie fantasizing dreamland. Baked good lovers say goodbye to sad dulce de leche overloaded birthday cakes and get your hands on a KelinCake. Impressive custom cakes made with tender love and delicious care, and blueberry passionfruit muffins that will turn into your morning staple. 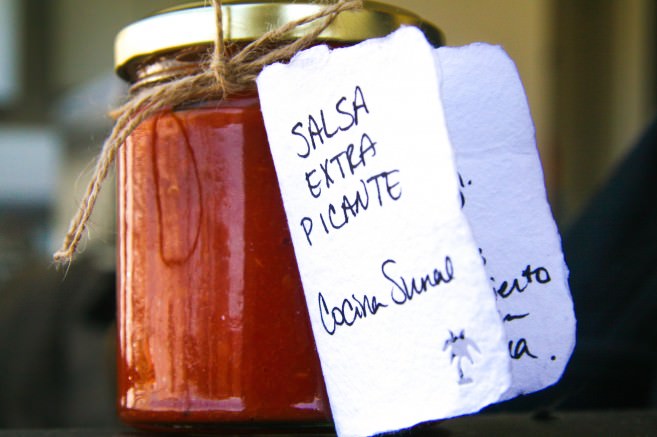 Ben’s Brown Bread is my new toasty loaf of love obsession – a whole grain sour dough bread covered in a lluvia of seeds and made fresh weekly. If you’re lucky, your brown bread may come with a small jar of sweet chili jam to smother all over your spreadables. Baines Best Bacon also produces a bacon grease you may want to double as a body massage oil, or just keep for your next egg fry up. After going off the market, rumor has it that the only real American style streaky bacon will continue production very soon. Bratwurst Argentina’s products are like a little taste of Germany, and as such the wiener is wursting with juicy meaty flavor. 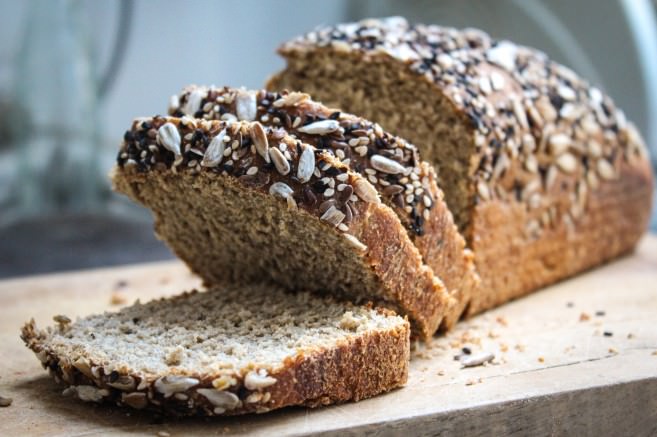 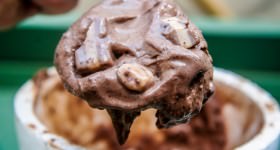 6 responses to “The Foodie Shopping Guide to Buenos Aires”