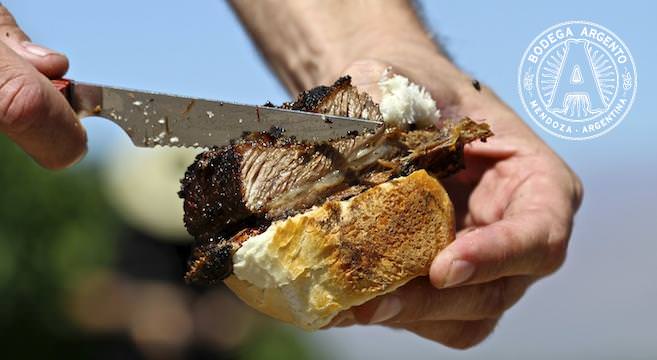 The appetite-whetting sight and scent of an alfresco Argentine asado is enough to bring out the inner caveman in even the most sophisticated of metropolitan food lover. And nowhere is this more apparent than after a hard day’s wine tasting, out among the vines of Mendoza, as the first sizzle of meat hitting the grill sends a plume of smoky welcome into the crisp Andean air. It’s the prelude to the near perfect Malbec moment, when this bold, aromatic and savoury variety comes into its own as a sensational partner to red-blooded meat cooked gaucho-style over a slumbering fire. 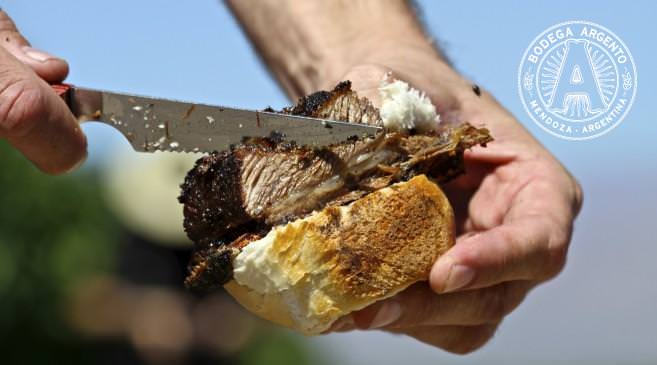 Beef from an asado in the vineyards; photo by James Kibbey.

Of course, Argentine Malbec and meat – with emphasis on beefy steaks and grills – is a story well told. So much so that Malbec’s fondness for a broader swathe of dishes is often overlooked. Meat, admittedly, remains its favourite sparring partner. But with a surprisingly varied flavour spectrum, ranging from juicy, red-fruit leaning wines to intense, tannic, darker specimens, the variety can take all manner of robust flavours and textures in its stride. 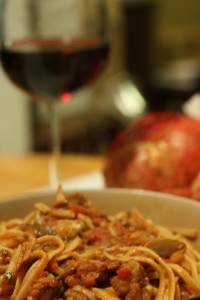 At the easier-going end of this spectrum, Argentina’s Malbecs sit comfortably with favourites such as pizza and rich pasta dishes – including Bolognese, but also with earthier aubergine or mushroom-laden concoctions. It’s also a pretty reliable bet with the comforting simplicity of proper butchers’ bangers and mustardy mash or blood-rich black pudding and Puy lentils.

Ramp up the quality a little, and the more savoury, even spicy edge to the variety starts calling for some pretty serious foods. Given the noble origins of Malbec in the vineyards of Bordeaux, this perhaps comes as little surprise. Moreover, it’s something that sommeliers are increasingly open to explore.

“Malbec is like pizza or sex – even when its not the best it’s still enjoyable,” says Alessandro Marchesan, head sommelier at Zuma and Roka restaurants in London. “But when Malbec is good, the aromatic, slightly herbal notes in the wine can work very well as a counterpoint to herby or even spicy notes in a dish.”

Marchesan’s most memorable Malbec match came with a salt and mustard-tinged ham hock dish, also taking fruity apple sauce in its stride. He also suggests Malbec as a versatile partner for a number of vibrant Spanish dishes, again including pork-based recipes where the sweet, juicy white meat is met with Mediterranean herbs, along with French charcuterie, where higher altitude wines, with higher acidity, act as a foil to the fatty richness in the food.

For Viraj Sawant, sommelier at La Trompette, it’s the higher altitude, more poised styles that offer the most possibilities with finer food. 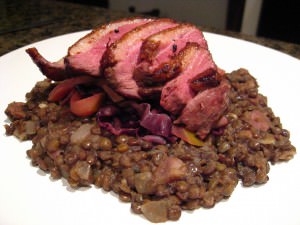 “If you are looking at the more elegantly structured, higher acidity Malbecs, then these are good at cutting through rich, fattier foods, such as duck, game birds or even goose,” says Sawant. “I would even pair some Malbec with a very oily, herby fish dish, such as sardines.”

Luigi Buonanno, wine buyer and head sommelier at the Etrusca Group of restaurants, says it all comes down the style of Malbec. He suggests elegant Patagonian Malbec with herby Provençal lamb (or a British Sunday roast complete with mint sauce), while favouring the bigger structured, richer wines of Mendoza with game or venison (so long as the game is not too gamey), and says hard cheese is also a good partner.

“Malbec, with its highish alcohol and rich body, is an ideal weight as a wine to round off a meal, and it also works well with hard cheeses such as mature cheddar or pecorino, so this can be another good time to bring it to the table.” 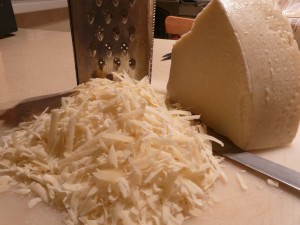 It’s not just British and Mediterranean cuisines, either, that can work with Argentina’s flagship grape variety. At the Cinnamon Club, a fine London eatery dedicated to modern Indian cuisine and good wine, executive chef Vivek Singh, working closely with his sommeliers, is currently recommending Argentine Malbec with his saddle of Cumbrian deer, which comes complete with a pickled spice kedgeree, on the menu.

“We find that Malbec is quite versatile and seems to work well with pickle and spice flavours such as fennel and cumin, along with the sweetness of the meat and smoky flavours from the tandoor,” says Singh. ‘It’s a wine that can cope with all these elements in a dish.”

As if all the above was not enough, perhaps a final word should go to another pairing possibility that the richer, softer styles of Malbec can take in their stride. It is, of course, chocolate, a normally tricky customer for wine, but one that (especially when dark and high quality) can work rather well with this very versatile champion of Argentine wine.

Malbec, then, offers so much more versatility than perhaps first meets the eye. And this in addition to being a world-beating partner for all things asado…

Please tell us what other foods and cuisines you like to pair with Malbec in the comments below. 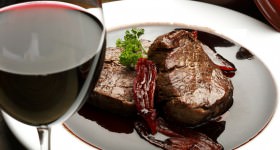 Cooking with Wine: Why Malbec is the Best Choice