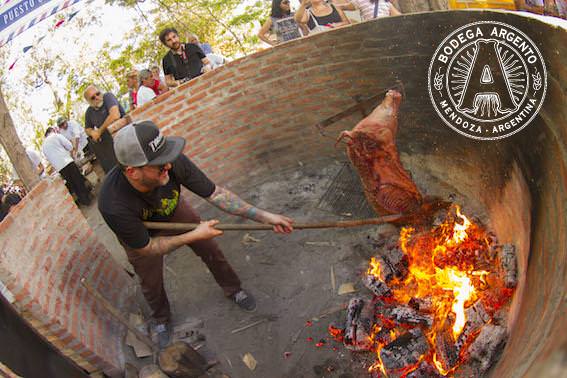 Rich pickings are easy to find in Argentine Patagonia. Prawns from Chubut’s waters, succulent lamb from both the Andean and coastal regions, fresh spider crab and toothfish from the depths of the southern Atlantic, smoked trout from the Lake District, and there’s even wine from Río Negro and Neuquén…

In a bid to secure its place on the food map, Patagonia hosts numerous food festivals held around this vast region. Fairs such as Madryn al Plato in Puerto Madryn, Feria Semilla in Río Negro, Cocina En Los Lagos in and around El Bolsón and Bariloche a la Carta in the Lake District are some feastivals that pop up over 12 months.

A river-side farm near the Welsh-founded town of Trelew hosted the first edition of this cool food fest that’s quite an innovation for the area. Chacra San José – home to geese, goats, sheep, ponies and orchards – received a makeover: bunting flapped in the breeze, handmade wooden stalls served up tasty treats and stables used as shade to avoid the searing sun. A stream (constructed by Welsh immigrants way back when, people with a strong presence in the area who celebrated 150 years living in Patagonia earlier this year) gurgled in the background.

The vibe? Around 5,000 people dropped by armed with deckchairs over the course of the weekend to hang out, drink fresh juices or locally produced craft beer such as Artesana, snap a selfie with a celeb chef, and chow down something other than the usual grilled lamb to the sound of live music by Leo García. And with 10 food stands managed by guest chefs and their Patagonian counterparts as well as local produce, there were a host of options to tuck into.

The place to be, however, was parrilla side, watching chefs prep then cook up surprise dishes on the grill or in the cute clay oven that had also received a makeover and looked like a pig.

Top Peruvian chef Anthony Vasquez, who opened La Mar Cebichería Peruana in Palermo Hollywood in March, meanwhile, was a complete trooper. After falling off a chair and fracturing his foot last Thursday, regardless he got stuck into everything, backed up by a supportive boot. He fried up Patagonian fish and chips presented in Diario Jornada newspaper, grilled up hundreds of prawns with TV presenter Ximena Sáenz and baked a whole salmón blanco in a clay oven. His dishes were enthusiastically sold to the public by a crack team bellowing through a tannoy.

Anthony told me: “This has been a great opportunity for me to check out exactly what Patagonia has, product wise.”

Other guests chefs included Danilo Ferraz from Morelia and 1893 in Buenos Aires, who whipped up goat’s cheese pizza a la parrilla. He said: “This is the first time I’ve been to a food fair outside of Buenos Aires, and now I’ve got a taste for travelling more!”

Morfilandia’s biggest guest attraction, however, was Leandro Cristóbal. Known as Lele, his tattoos and skater past ensure viewers’ fascination with the chef-owner’s reality TV show, named after his restaurant in San Telmo, Café San Juan. And every time he got a bit closer to the public, the calls came for a photo with the celebrity chef, from grannies and kids and everyone in between. While Lele admitted he hadn’t had time to put together a stand, not long after, he was busy salting four fresh pork legs for the fire pit and clay oven.

Lele told me: “These guys [the organizers] are my friends so I’ve been to Chacra San José before. Last time I came here, we cooked three whole pigs stuffed with chorizos and almonds in the fire pit – those were cerdazos! I didn’t have time to sort out a stand for Morfilandia, but I came anyway as I wanted to support my friends.”

However, Pablo Soto from Comodoro Rivadavia pulled out two outstanding dishes: cured trout sashimi sourced from Lake Musters in southern Chubut topped with pickles, and a phenomenal handmade guanaco chorizo, flavourful and not too fatty. That’s right folks, guanaco, looks like a llama, tastes like one too. As for dessert, this was the moment to try a brand-new invention by Bomke heladería and Memorable baker from Trelew: a Welsh ice-cream fruit cake. And no, I don’t know how to say that in Welsh. Okay, it might be cacen ffrwythau hufen ai.

Big shout outs should go to the group of friends who sweated behind the scenes of this fun project that ended up exceeding all their expectations. As well as Sal de Aquí’s Martín, Miguel Ángel Armada from Garbo Art Media, artist Bruno Berrettini, journalist Ulises Zadoff, restaurateur Pablo Novello from Giovanni, chef Fernando Zárate from Giovanni and Casa Club Ferdinando and chef Luis Calderón from Panacea all heaved bags of ice and ingredients, built stalls, spread the word and brought Morfilandia to life.