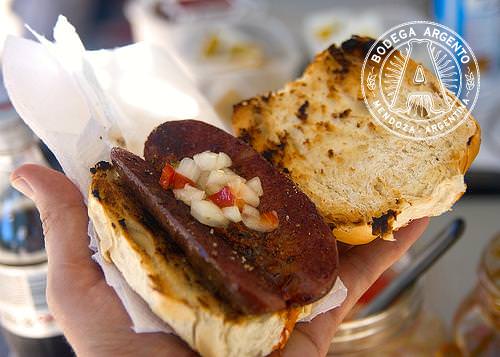 The second in our

It took me two years of living in Argentina to figure out that choripán – the ultimate Argentinian street snack – is cunningly named from the words chorizo, a sausage, and pan, meaning bread. (Of course, it took me four years to realise that ‘chile con carne’ is ‘chilli with meat’ – so what can I say.)

Only the finest cuts of pork or beef. Ha ha, not really. If you worry about what goes into a chorizo, or you are the type of person who inspects their food, I’d skip the whole experience. The bread is usually crusty enough to scrape the skin off the roof of your mouth.

h3. Why do we love choripán so much?

The choripán is a hot, grilled, heavily condimented sausage in a bun. Yet, there is more to it than that. Walking the streets with grease-dripping chori feels so Argentinian. It makes you feel like a local, one of the guys. It says ‘I am from Argentina and I don’t care what goes into my food as long as it is from an animal.’ However, if you want to be really hardcore, buy a morcipan, a morcilla (black pudding) sausage in a bun.

h3. How do you eat choripán?

The choripán should be eaten on the move – preferably on the way to a football match. Ask for ‘un chori’. The asador (grill man) will split it in half, heat it up and slap it in a bun. Before you will be a selection of sauces: chimichurri, a spicy(ish) sauce of dried chilli, garlic, olive oil and oregano – although everyone has their own recipe – and usually a tomato and onion salsa in vinegar. Load it up sufficiently enough to have it dripping off your elbows.

h3. Where do you get choripán?

You’ll see vendors outside football stadiums, in roadside vans and on Avenida Corrientes east of 9 de Julio. The mother lode, however, for cheap choripanes is along the Costanera, the far side of Puerto Madero. Otherwise one will come with any asado (grill).

15 responses to “We Love… Choripan, the Ultimate in Argentine Street Food”