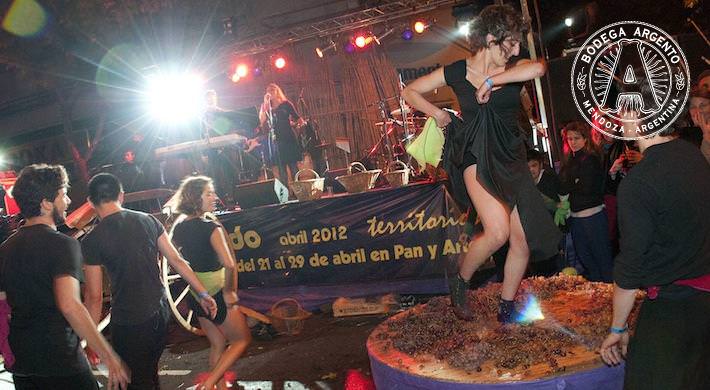 When you hear about over two thousand people gathering on the streets of Buenos Aires, odds are it’s a rousing protest or pro-government rally. Yet when similar numbers took to the streets in Boedo last Saturday night, it wasn’t saucepan bashing or Peronist chants keeping them going. Instead, tango music played and Malbec bottles were drained, as the third edition of Boedo’s Vendimia harvest festival got under way.

The event, started in 2010 by Liliana Moreno, an actress and owner of local restaurant, Pan y Arte, is an artsy celebration of Argentina’s wine harvest. What originally started as a relatively small event held inside one restaurant has now grown out to become a sophisticated, open-air street party. This year, a stretch of Avenida Boedo has been shut down and an outdoor stage has been erected to welcome performers such as dynamic tango group Orquesta Típica Fernández Fierro. The event – which is running now through this Sunday – also sees street parades and wine tastings by leading bodegas.

Here’s a little taste of it, in the words of a persuasive local TV presenter:

The inspiration is the giant Vendimia festival held every year in Mendoza. “Our family is from Mendoza and we wanted to celebrate its wine culture here in Buenos Aires but with a strong artistic flavour,” says Liliana’s son Lucas Marín, who is one of the festival’s directors. He says the event has really tapped into the area’s community spirit. “Although it was my mother’s idea, the people have made it their own. An event like this – which is free and features top-level performers – is not very common here. It’s generating a real cultural movement.”

Boedo itself is a slow burner on the tourist scene. It’s been tipped as up-and-coming for a while now, but there’s been no break-through. And that’s the charm. “Other neighbourhoods may be more set-up for tourism, but people come here looking for authenticity,” says Lucas. “They notice the difference and the barrio spirit. It’s contemporary, but there is an awareness of history too. It’s a great mix.”

Wandering down Avenida Boedo, you’d be forgiven for dismissing it as just another commercial throughway. Scratch away at the surface, however, and you find signs of its artistic heritage. Back in the 1920s, this was one of the city’s leading cultural hubs. A magnet for tango musicians and poets, it had its own literary movement and produced alternative magazines.

A little taste of those days can still be found in wood-panelled heritage cafe, Bar Margot, which is every bit as appealing as the San Telmo bars that appear in every guidebook. I would try to romanticise it some more, but someone’s already done a far better job. Have you ever heard anyone do ‘nostalgia’ better than the sultry porteña narrating the following clip?

The years since Boedo’s cultural heyday certainly haven’t been easy. The final nail in its coffin seemed to be when the local football team – San Lorenzo – had its ground sold in 1979 to make way for a Carrefour supermarket. Supporters have recently upped the campaigns to have it restored, but opposition teams still delight in teasing them. A paraphrased Racing chant goes, “I went to your ground and found a supermarket, painted red and blue… Racing has a stadium, you have a grocery!”

But football aside, Boedo could be making a comeback, especially with events like Vendimia and an influx of younger residents, attracted by low rent. “You can definitely see it is becoming more interesting to tourists,” says Andrea Palmisciano, who works at Lola House, one of the most appealing hotels in the area. “Some choose the trendier Palermo, but the prices, style and atmosphere are drawing others to our neighborhood. Our guests tell us they love the small restaurants and cantinas.”

Pan y Arte makes an interesting trip, even when Vendimia isn’t on. It hosts constant art exhibitions and has its own theatre, plus it’s one of few places in the city specialising in Mendocino cuisine. Try its regional empanadas or the pastel de papa, an unusual sweet-and-savory combination of meat, mashed potato, sugar, cinnamon and raisins. It’s best washed down with Mendocino wine, of course, but failing that, you can always make an exception for an artisanal beer down the road at Cossab.

Vendimia 2012 runs until Sunday 29 April. The program of events can be found at www.panyarte.com.ar.