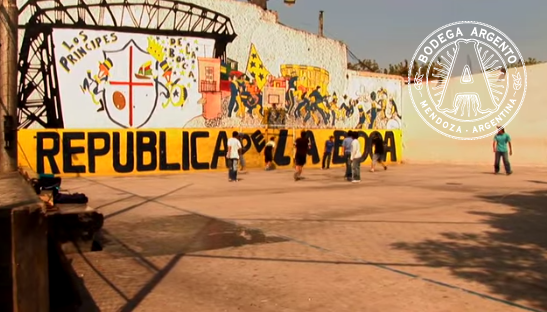 Remember Bambi, that carefree fawn galavanting about in the forest before reaching his (Spoiler Alert!) mum’s untimely death? Well, those were Patagonian trees. How about the grandiose Himalayas in Seven Years in Tibet? They’re the Andes acting as location-doubles. As for the bleak mountains on the border of Chile and Argentina in Alive? – OK, that’s actually Canada faking it.

Argentina has long seduced international directors with its lower production costs and scenery. Seems this country at the end of the world was always destined to sparkle as a star of the silver screen (after all the word ‘Argentina’ comes from latin the ‘argento’ meaning ‘silver’). If you fancy some classic Argentine film recommendations, see here, however, I went on the cinematic trail to uncover the international films where Argentina’s the star – sometimes in the most unexpected way.

This is an absolutely stunning Wong Kar-Wai film about loneliness in which a gay Hong Kong couple find out Argentina’s anything but a romantic escape. Thinking of going to Buenos Aires on honeymoon? Don’t watch this film – and if your other half says “let’s start over” and invites you to BA to work things out, be very afraid.

STARS: Buenos Aires nightlife in B&W, the rustic cobblestone streets of La Boca and San Telmo, a flop house by the Riachuelo on the city’s outskirts and a great timelapse of El Obelisco and Avenida 9 de Julio.

RECREATE: Jog across Boca bridge as the lovers do and ride the 29 bus just after sunset to appreciate the barrio’s decay and perfection. The San Telmo tango café featured still exists as Bar Sur (Estados Unidos 299).

DON’T: call it Buenos Aires’ answer to ‘Lost in Translation’ or ‘Brokeback Mountain’.

Read the book, got the T-shirt? Now watch the film about the journey of the 23-year-old Ernesto Guevara – before he became the iconic Marxist revolutionary Che – and you bought the mug. Then go on the road Che-style (minus the resultant killing).

STARS: Gorgeous Gael Garcia Bernal – ok, he’s Mexican, but he does a good Argentine accent and is very easy on the eye.

RESPECT TO: Granado is played by an Argentine actor who is Che’s 2nd cousin.

RECREATE: If you don’t fancy swimming the Amazon or holding hands with lepers, then grab a 1939 Norton 500 and hit the road (5,000 miles of it to be precise) – or cheat and use a tour company. Start at Buenos Aires’ Plaza Once, head to coastal Miramar, and onwards to the Chilean border via the beautifully photogenic Lake District.

DON’T: be moved to ravish areas and kill people.

Brad Pitt didn’t need a body-double in this tale of Tibetan monastery life set in the Himalayas, but the mountains did. It was shot in the Andes due to cheaper production costs, and filming permit and weather issues.

STARS: The Andes standing in for Tibet. Also features San Rafael, by the curve in the river and Uspallata, at the Argentine-Chile border in the Mendoza region.

RESPECT TO: The locals who passed as Tibetans and Himalayans.

RECREATE: Why not build a very long recreation of a Tibetan city into the Andean foothills and an ancient Palace in an abandoned garlic warehouse – then stay there for 7 years?

DON’T: try to fly in a herd of yaks as the production team did – each animal needed its own passport and photo ID. No smiling allowed.

With one of best film scores of all time, a Jesuit missionary in 18th century South America attempts to protect a remote Indian tribe in danger of falling under the rule of pro-slavery Portugal.

STARS: Robert De Niro, Jeremy Irons and Liam Neeson, but the real star is the Iguazú Falls and Misiones province.

RESPECT TO: The first film to be shot by an international crew in Argentina. Many of the natives were improvising locals who were secretly cussing away (well, wouldn’t you?). Random fact: The majority of the crew became ill with amoebic dysentery.

RECREATE: Explore Iguazú Falls national parks and Jesuit missions ruins. Do the Macuco trail through lush jungle and visit islands such as San Martín where this was filmed.

DON’T: Recreate the scene where the Guaraní community ties a priest to a cross and hurls him over the falls to his death.

If you don’t like musicals, then don’t bother – unless you like shoes. 40 years after her death, the life story of Eva Duarte de Perón isn’t the most historically accurate, but hey, Madonna earned the Guinness World Record title of ‘Most costume changes in a film’.

RESPECT TO: 3,000 extras came to see Madonna stick her head out of a balcony at the government building to address the masses gathered at Plaza de Mayo.

RECREATE: This isn’t Titanic. You’re not king of the world. You can’t recreate the balcony scene – unless you have 3,000 friends to act as extras (and Facebook friends don’t count). If you’re big-time you could stay in the Four Seasons where Madonna conceived whilst filming!

DON’T: get into a debate about this film with a Peronist, as it was seen as a commercial manipulation of an important figure. The famous balcony scene had to be shot at night to avoid protests, because in reality that never happened.

Doesn’t look that bad, does it? It is. A film by Francis Ford Coppola – director of the Godfather films and Apocalypse Now – and now Tetro, a film noir about an Italian family with secrets galore. Watching this has been described as an ordeal, but hey, Buenos Aires looks good on the big screen.

STARS: The barrio of La Boca gets mucho screentime, plus Cariló doubles as a setting for The Hamptons.

RESPECT TO: Coppola for getting into mate tea.

RECREATE: The whole time Coppola was making the film, he was also turning his Palermo house into a sanctuary. You can stay there and pretend you’re the auteur.

DON’T: say this is a good film. It’s known for being total rubbish and Coppola got a reputation for being cheap. Most of the cast and crew was Argentine and the film was plagued by rumours of violation of union labour rules. Then Coppola was burgled and robbers took film equipment. Hmm.

A hitman sent to Argentina gets seduced by a beautiful dancer who becomes his teacher and guide into Argentina’s sensual world of the tango (hey, it happens to the best of us). What a premise.

STARS: Other than a bit of Brooklyn, this is mostly set in Buenos Aires.

RESPECT TO: The authentic tango dancers and locations.

RECREATE: Take your 2 left feet to the club with the checkerboard floor – Sin Rumbo (José P. Tamborini 6157) – one of the oldest, most traditional tango joints in Buenos Aires.

DON’T: assume that a 40 year age gap is the norm. This film is an ad for seedy tourists to get it on with hot Argentine women.

Here’s a drinking game for you. Grab a bottle of Malbec and take a swig every time you spot Argentina:

HIGHLANDER II (1991) – A terrible movie which ruins the original story, but check out the Teatro Colón and the Subte.

THERE BE DRAGONS (2011) – Spot Constitución masquerading as a Spanish train station in this tale of the Spanish Civil War, filmed across Buenos Aires province.

PATAGONIA (2010) – Does exactly what it says on the tin. Yes, it’s in Patagonia. Matthew Rhys and Duffy (the popstrel) head to Argentina to work on their relationship.

ON THE ROAD (coming soon) – The film adaptation of Jack Kerouac’s cult novel. Is it the American West? No, it’s Bariloche and the picturesque town Villa La Angostura, around the snow covered Cardenal Samoré border. Is it the Grand Canyon? No, it’s a Buenos Aires’ dirt mine.

The featured image for this article on The Real Argentina homepage was taken by jglsongs. 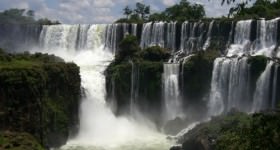