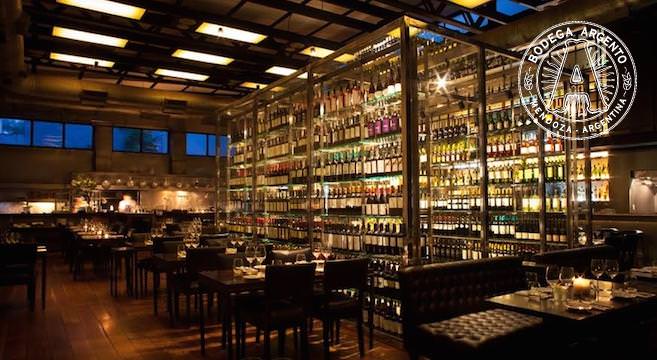 While foodies come over all emotional trying to decide which Instagram filter to use on a tasting menu, we oenophiles get decidedly hot and bothered over wine cellars – and not just their contents. Wooden wine racks have given way to temperature-controlled fridges, which in turn have been eclipsed by bespoke storage facilities that rightly take centre stage in fine dining establishments. Let’s take a look at some of Buenos Aires’ sexiest wine cellars.

Argentina’s number-one restaurant Tegui was constructed six years ago with two poles in mind – the open-plan kitchen and the cave – and the attention-seeking ground-floor wine cellar designed by chef-owner Germán Martitegui and architect Horacio Gallo puts the fun into functional.

Germán explains: “The concept is a work of art, which is why it’s placed behind glass in a picture frame made from tucupi root. But the cellar is also like a ballet production: the ladder hooks onto a ceiling runway so Martín looks like a ballerina!”

He’s talking about when in-house sommelier, Martín Bruno, recently anointed Argentina’s second-best somm, sources bottles from the 1,300-strong collection. Martín adds: “It’s great fun – diners think a motor is attached to the ladder but we just pull ourselves along between racks and from a distance, it looks like we’re dancing. Everyone loves it! Besides being attention-seeking, the cellar is also functional and acts like an office – I keep decanters and wines by the glass there, and it’s also where our last bottle of Cristal is kept.”

When Sucre’s new owners – London’s Gaucho Group – took charge of affairs at the Belgrano restaurant in 2013, the wine cellar was the first port of call for a revamp. Always a focal point in the middle of the open-plan eatery, its solid walls, however, did little to encourage curiosity. But since the redesign, diners can’t get enough of the three-metre high glass cave, as managing partner Stefano Villa explains.

“We wanted to swap the cellar’s cement walls for glass, so it would become the central focus while improving light quality as well as displaying wine. Bottles are stored standing up so diners can see them from anywhere – visual memory is very important and can often prove more useful than a wine list. Diners can enter the cellar and choose for themselves with one of our staff, so it has become interactive.” Designed by architect Alejandro Sticotti, who has created cellars for various Mendoza wineries, this oenological greenhouse’s 360º panorama also lets diners can catch a view of the kitchen, keeping wine and food fans happy. 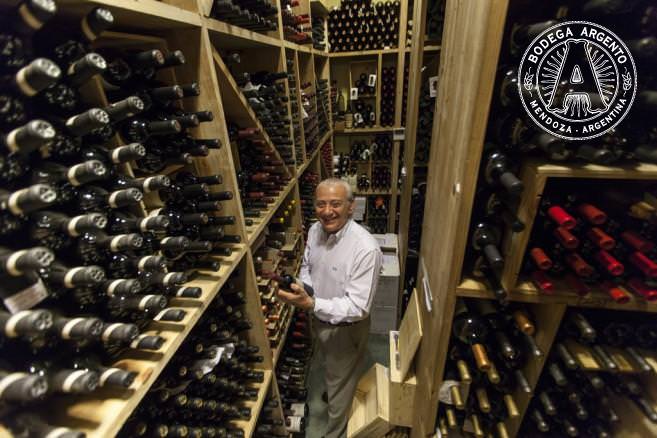 At Oviedo, a classic porteño restaurant that has twice ranked in the Latin America 50 Best awards you’ll find not one but two cellars. And with good reason: owner Emilio Garip’s passion is wine and his epic 19,000-bottle collection was recently selected as Argentina’s best by The World of Fine Wine. Steeped in history, the first-floor cellar is home to gems including the most epic of French châteaux such as Mouton-Rothschild, Latour and d’Yquem as well as Argentina’s most prestigious labels and rarities such as a Vega-Sicilia Único 1917, a Tempranillo/Cabernet Sauvignon blend from Ribera del Duero.

Emilio, who is also a port and sherry fan, says: “I’m a rat according to the Chinese zodiac and that means I’ve got a capacity to hoard! I started collecting without really realising it, but now I have a vertical collection spanning various vintages from different wineries. Some bodegas don’t even have their own wines anymore – but I’ve got them. That said, I am down to the last bottle in some cases but I never sell the last one – it’s for keeps.”

Emilio’s latest passion is for magnums, because, he says, they age better than standard 750ml bottles and are therefore tastier. Currently stored in the first-floor cellar, the restaurant is set to incorporate a fourth wine list that will include these 1,500ml beauties.

Meanwhile, the second cellar is found in the basement, bottles gleaming temptingly through the iron trapdoor. Oviedo’s sommelier Germán Franco says it’s like working in Disneyland. “This is my place in the world. Wine comes in, wine comes out and I move stock around – it’s like a giant game of Tetris.” 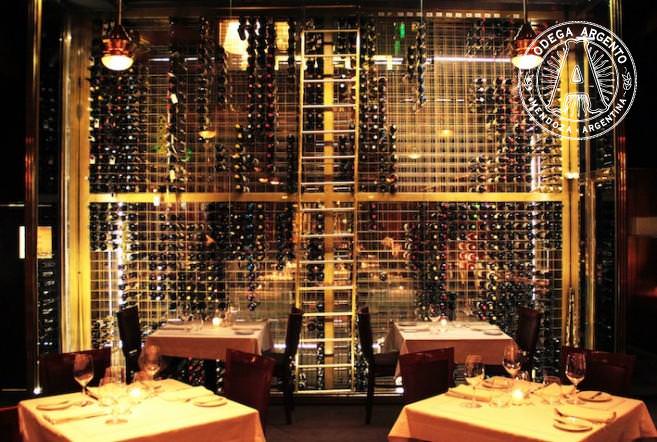 The cava at Casa Cruz; photo by Cinthia Baseler.

Celebrating its tenth anniversary this December, Casa Cruz founder Juan Santa Cruz was responsible for the Palermo Soho eatery’s every last design detail. Shiny and as bright as a lighthouse nestled at the end of the salon, a distinctive bronze cross on the façade is the ultimate eponymous tribute. However, the chic cellar wasn’t always such a show-stopper, as Juan explains.

He says: “The idea behind the cave was to give wine an important presence in the salon so diners could see the sommelier selecting their wine and therefore it provided a focal point. What you see is what there is. It’s an image of suspension, thanks to the bronze ladder that runs in front of the racks, and the frame is also bronze – in fact, the ironmonger needed to incorporate the cross to hold the construction together.

“In the early days, the cellar was lit up with regular bulbs but a decade on and technology has changed: it now uses LED bulbs, which heat up less – and that places the cave in a new light.”
Londoners who can’t get to Casa Cruz will be pleased to hear that the restaurateur is set to open an eatery in Notting Hill in 2015, whose cellar, he says, will have a similar spirit to Casa Cruz’s. 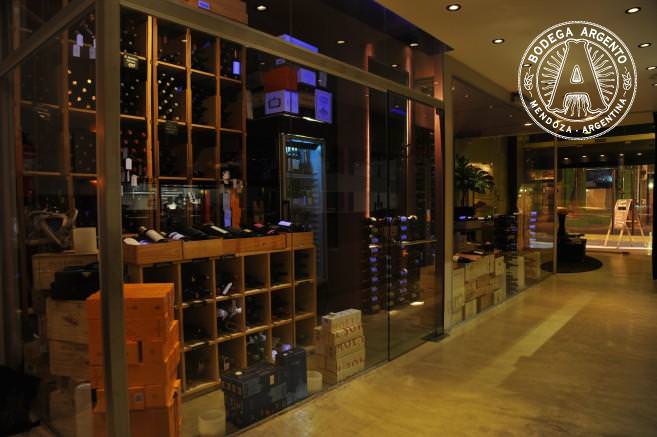 The cellar at Crizia; photo by Guillermo Smirnoff.

When opportunity knocked for cook Gabriel Oggero to open his own establishment, Crizia, 10 years ago, open spaces were at the forefront of his mind – and that included the wine cellar. Gabriel says: “I’ve worked in enclosed kitchens for 30 years and had never been able to enjoy what was going on past those four walls. So when I had the chance to open my own place, I created a passageway so that diners walk in and see the open kitchen on the left, then check out the wine on the right.

“I designed the cellar myself, and it’s made from glass then backed up by wood and metal, all materials that go hand in hand with wine. I love looking at it while I’m working! A lot of enologists enjoy coming to dine here. With around 375 labels and 4,000 bottles on site at the moment, the aim is to grow that by 25 percent each year. And we’re also going to start hosting blind tastings – basically, we love wine at Crizia!”

Other musts for Buenos Aires cave hunters include San Telmo’s El Baqueano, Elena at The Four Seasons, the all-encompassing cellar at Aldo’s Restorán & Vinoteca, the Duhau Restaurant & Vinoteca at the Park Hyatt and Trova’s private dining room. And, should you be dining at Nicky New York Sushi, a polite request to see the wine cellar is your only way into The Harrison Speakeasy.

One response to “The Sexiest Wine Cellars in Buenos Aires”