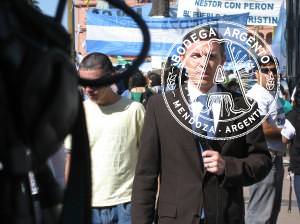 By design, there is little monotony in the life of a freelance foreign correspondent – and that’s what keeps me sane. Admittedly, not all days are exciting or glamorous, but many of them are, and I feel privileged to have access – even if temporarily – into the lives of people of all persuasions.

Moreover, I get to witness events and visit places that most others do not. It’s a great gig, and Argentina is an excellent place to be in business.

When I moved to Buenos Aires in March 2001, I had a vague notion that the Argentine economy was in trouble, but nothing could have prepared me for the tension that existed leading up to – and then following – the December 2001 economic collapse.

I found myself smack dab in the middle of one of the most spectacular financial fiascoes in history (one that is still relevant today; ask the folks in the Eurozone). As a young journalist, it was a dream, and because very few English-language media outlets have full-time correspondents in Argentina (or anywhere else in Latin America, sadly), I was well positioned to be their man-on-the-scene.

But that’s not to say it was easy getting started. I spoke just a few words of Spanish when I arrived, so understanding and then explaining the complexities of the economic situation here was a daunting task. What’s more, Latin American news is often at the bottom of most editors’ priority list, so even with a major crisis taking place, it was always a challenge (and often remains one) to get editors interested in what’s going on here. The September 11, 2001 terrorist attacks in the U.S. also shifted much of the global media’s focus to the Middle East and Asia, further isolating Latin America from the headlines.

My first few years in Buenos Aires were a blur of street protests; I lost count of how many times I marched with unemployed factory workers or angry union bosses (or both) from the Congreso to the Plaza de Mayo.
The majority of the stories I reported at that time were born out of the streets, whether at peaceful cacerolazos or violent lootings. I would just as often find myself interviewing a cash-strapped socialite in Barrio Norte as inside the Villa 31 shantytown, talking to a Coto delivery boy from Paraguay.

Over the years, I have reported repeatedly on developments in long-standing cases of importance, like the AMIA terrorist bombing and “Dirty War” trials. Only recently, in fact, I stood with thousands of others in front of a downtown courthouse to listen as twelve former Argentine military officers were sentenced to life in prison for the atrocities they committed at the ESMA torture center. I recalled being at the ESMA in March 2004 when it was opened to the public for the first time, and witnessing victims’ family members vandalizing the building in disgust. I could hardly blame them.

Of the array of memorable stories I have covered over the past decade, some were incredibly sad, like a gruesome double murder in Santiago del Estero and the Cromañón nightclub tragedy. Others were absurd, such as the $800,000 dollar suitcase scandal, the Mark Sanford saga and “Lemon Gate”. And still others were dangerous, like reporting live from the epicenter of the 2010 Chile earthquake, and from outside River Plate stadium following the club’s relegation to the B league this past June. 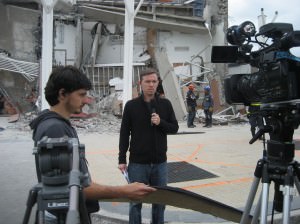 The epicenter of an 8.8 earthquake – Concepcion, Chile
Photo courtesy of Brian Byrnes

I have visited 18 of the 23 Argentine provinces and had some amazing experiences. I’ve dug for fossils in Neuquén, herded sheep in Santa Cruz, played polo in Buenos Aires and gone caiman scouting in Corrientes. In Mendoza, I’ve visited dozens of wonderful wineries and soaked in all the pomp and circumstance of the Vendimia festival.

I have interviewed lots of celebrities, too, both international and local. When I spoke to Javier Bardem, he was more interested in discussing rugby than film. Catherine Deneuve dazzled me with her ability to simultaneously chain-smoke skinny cigarettes, drink coffee, speak on her cell phone in French and answer my questions in English. Araceli Gonzalez didn’t mind being interviewed while wearing a tiny silk nightgown – and not much else. I was flattered when Coldplay’s road manager approached me after the band’s press conference here and told me that Chris Martin had personally asked to meet me – but surprised when all he really wanted to know was if I thought the Argentine media would trash the band after they cut the press conference short, tiring of silly questions. Don’t think rock stars don’t fret about their image.

Diego Maradona has provided endless hours of work for me over the years, whether on his deathbed, as a television host, or as coach of the Argentine national team. It’s never a dull moment with El Diez, so gracias, Diego. 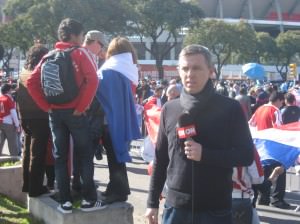 The final of the Copa America (Uruguay vs. Paraguay)
Photo courtesy of Brian Byrnes

Early in the Kirchner era, it was politically popular to blame the United States for Argentina’s economic troubles. The anti-U.S. sentiment grew toxic when the U.S. invaded Iraq. I was often confronted by Argentines for being both an American AND a journalist. I continually had to remind them, often with their fingers pointing in my face, that I was there to tell the world about their situation, not to defend my country’s politics.

In November 2005, Argentina became ground zero for the anti-U.S. sentiment that had been brewing throughout Latin America. George W. Bush visited Mar del Plata for the Summit of the Americas, and tens of thousands turned up to protest his presence, including Maradona. It got ugly, and images of rioting and violence from the city known as “La Feliz” were broadcast around the globe. I was there reporting, and spent two days dodging rubber bullets and sucking down tear gas. By the way, if someone tells you wearing a surgeon’s mask and a pair of Ray Bans will protect you from the sting of tear gas, they’re lying. Trust me.

As I watched the jubilant celebrations in the Plaza de Mayo recently, following President Cristina Fernandez de Kirchner’s decisive re-election, I reflected on the remarkable changes that have taken place in Argentina over the past ten years.

Previously, if people were gathering in the Plaza de Mayo, usually there was trouble brewing. But on October 23rd thousands were there to cheer on the president, who was shaking her hips and pumping her fists like a teenager at the junior prom. What a difference a decade makes. 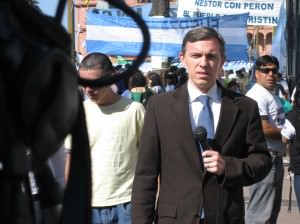 The government should be applauded for creating jobs, lowering poverty and championing human rights, but there are still major disparities in Argentina, especially when it comes to the media.

The Kirchner government(s) have worked to silence their critics, often lazily blaming journalists for the country’s woes. If President Kirchner is truly a proponent of democracy, then she needs to recognize that unfettered freedom of the press is a pillar of it.
_____________________________

From his base in Buenos Aires, Brian Byrnes reports on Latin America for CNN, Newsweek, The Washington Post, CBS News, NPR, The Hollywood Reporter and others. You can follow Brian on Twitter (@BrianByrnesCNN) or visit his website: www.brianbyrnes.com

From his base in Buenos Aires, Brian Byrnes reports on Latin America for CNN, Newsweek, The Washington Post, CBS News, NPR, The Hollywood Reporter and others.