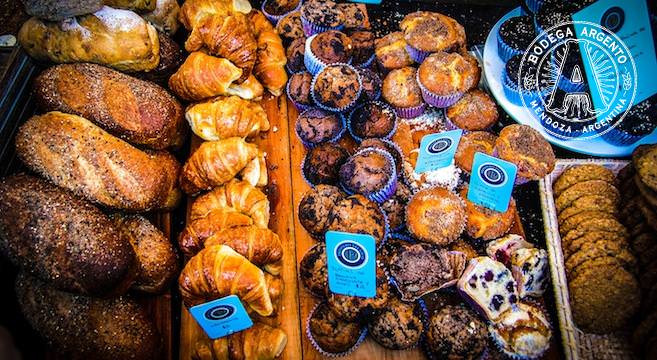 There’s no denying that many Buenos Aires inhabitants tend to incorporate two food groups into their daily diet: sweets and carbs. Walk down most porteño blocks and you’ll find no shortage of the French boulangerie, panaderías (bakeries) and confiterías (confectioneries), offering a wide variety of the good stuff: fresh baked breads, gooey indulgent pastries, and other diet-ruining snacks that could bring any nutritionist to tears.

Panaderías, generally spots that excel in bread making, are mostly to-go only, serving mainly bread and a small selection of facturas (pastries), while confiterías offer a wide range of medialunas, facturas, bread, miga sandwiches, and perhaps a few homey lunch specials along with a salon for eating in house. The explosion of French boulangeries is a new phenomenon, either run by French expats or locals who are giving a modern, trendy hybrid café-bakery alternative.

So where are the best spots to get the ultimate fresh, calorie-worthy treats? Luckily we packed on the kilos to bring you the best bakeries, bread shops and bread-worthy cafés this city has to offer.

Bröet
Azcuenaga 1144, Recoleta
An Austrian-run bread haven in the middle of Recoleta, Bröet serves the real deal with over a dozen different styles of breads, a variety of pastries and even a few sandwiches. Think baguettes, cheese flautas, focaccia, rye bread and challah-like braided brioche.
http://www.broet.com.ar/ 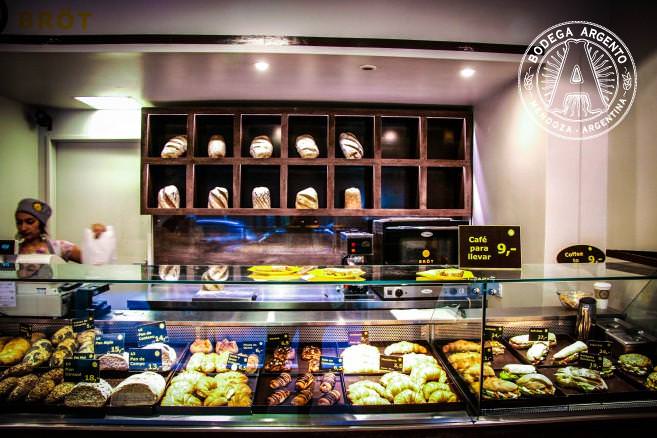 Guber Patisserie
Multiple locations
From the makers of some of the best medialunas in Buenos Aires, Guber is also known for a variety of bakery goodies like facturas, cakes, muffins and tea sandwiches. Even though Guber has expanded to five locations across the city, each bite still tastes like homemade baked deliciousness.
http://www.guberpatisserie.com.ar/

Hausbrot
Multiple locations
A citywide ‘bread house’ with 15 different stores throughout Buenos Aires, Hausbrot has been making all natural, high quality breads since 1988. The company not only bakes preservative-free, organic whole wheat breads, but also believes in the importance of social responsibility and remaining environmentally conscious. From empanadas to pizza dough, medialunas to whole grain bread, Hausbrot offers a great variety of fresh products.
http://www.hausbrot.com/ 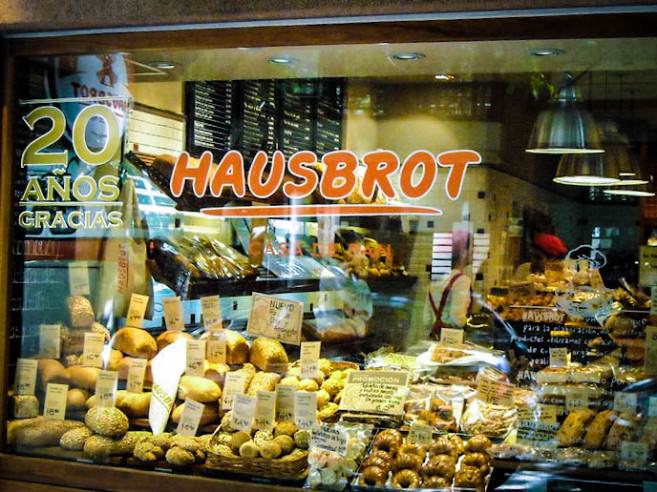 BardePán
Virrey Arredondo 3486, Colegiales
A quiet corner café hidden in Colegiales, the name of this spot says it all. Specializing in, yes, you guessed it – bread, this carb-bar offers so much more: exquisite medialunas, over seven different types of breads, gourmet products for sale (spices, homemade yogurt, honey, organic mate tea) and bread making classes – all in a quaint, cozy and kitschy antique environment. It conjoins with La Prometida, a barrio restaurant that was a pioneer in the pop-up game, when rotating guest chefs were invited into the kitchen to cook up special menus. 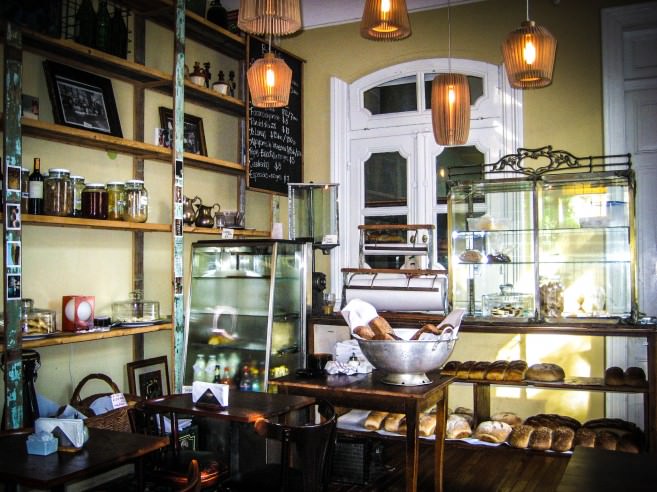 Malvón
Serrano 789, Villa Crespo
This trendy spot outside the Palermo bubble was one of the first cafés to help give Villa Crespo that cool factor. With high ceilings, a backyard garden, a large dining room and even outside seating in the front, the best thing about Malvón is the wonderful (and affordable) loaves of bread. Bendito sea el pan nuestro de cada día, or blessed be our daily bread – that’s the sign hovering over a large selection of New York ryes, bagels, focaccia, multigrain and ciabatta. In addition to the pan, Malvón is known for an impressive sweet spread, with delectables like almond croissants, passion fruit cheesecakes, pecan pies and carrot cakes.
http://www.malvonba.com.ar/ 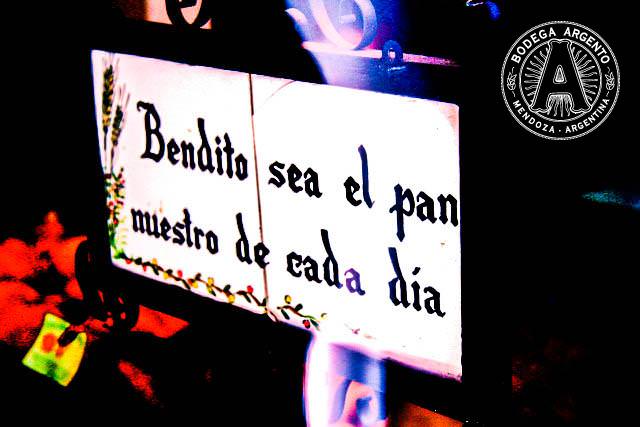 Blessed be our daily bread at Malvón; photo by Allie Lazar.

Panadería de Pablo
Defensa 269, Centro
When visiting the bread-centered spot of celeb chef Pablo Massey, skip sitting in the massive modern restaurant and go straight to the good stuff: the shelves filled with fresh breads, focaccia, Parmesan pizza bread, bread sticks and olive breads. If you go early in the morning, there is the most beautiful fresh bread aroma permeating throughout the whole restaurant.
http://www.lapanaderiadepablo.com/

Dos Escudos
Juncal 905, Retiro
A legendary Buenos Aires confitería, Dos Escudos excels in fresh baked goods, prepared daily and available to the public at 7am every morning. It makes for an ideal café to sit for a morning coffee or pick up a load of tantalizing pastries.
http://www.dosescudos.net/home.php

El Horno de Medio Oriente
Juan de Garay 2501, Boedo
This Boedo panadería outside the tourist track has been around for over 35 years, specializing in Middle Eastern delights. Owned by a Syrian family, this is one of the only traditional bakeries that serves pita and lavash breads, traditional dishes (hummus, falafel, shawarma), and Middle Eastern cookies and sweets. While there are a few bar stools, the crowds mostly flock for the bread, pastries and Syrian-Lebanese food to go.

La Pasta Frola
Corrientes 1635, Centro
The OG of confiterías, La Pasta Frola has been around for quite some time (since 1910), making it one of the oldest confiterías in the city. Known for their Italian, Spanish and German selection, the bakers wake up early each morning to make more than 20 different kinds of pastries, a variety of cakes, chocolates and even lunchtime sandwich specials.
http://www.la-pastafrola.com.ar/

Ritz
Lacroze 2425, Belgrano
The masters of the miga (tea sandwich) and the Mil Hojas cake, Ritz might look just like any confitería from the outside, but this special haven knows how to bake the sweet stuff. A classic bakery serving porteños since the 1930s, it doesn’t get more traditional than this Belgrano spot. For fans of the miga sandwich, this is for you: they make their own fresh white bread where it is stuffed with many fillings like hearts of palm, tuna, salmon, ham, turkey and even peach.
http://www.confiteriaritz.com.ar/

For some extra joyful thigh jiggles, try these cafés that know their way around an oven. Prospero Velazco, on the corner of one of the prettiest Palermo Hollywood streets (Voltaire), serves flaky croissants and decadent cheese scones, along with a strong cup of Illy coffee. A few blocks away Moremore, run by two Korean sisters, offers croissants bigger than an arm and fresh baked goods that have customers quickly becoming sugar addicts. If you are looking for a café that also has a killer selection of breads, pastries and cakes, Sasha is your place. Hidden in the Isla de Recoleta near the British Embassy, Florencio is the place for wonderful pastries and rich chocolate desserts and while on the other end of Recoleta, German bakery Smeterling creates quite the sidewalk jam as it’s full of sweet loving pedestrians with their eyes glued to the sexy dessert window display. 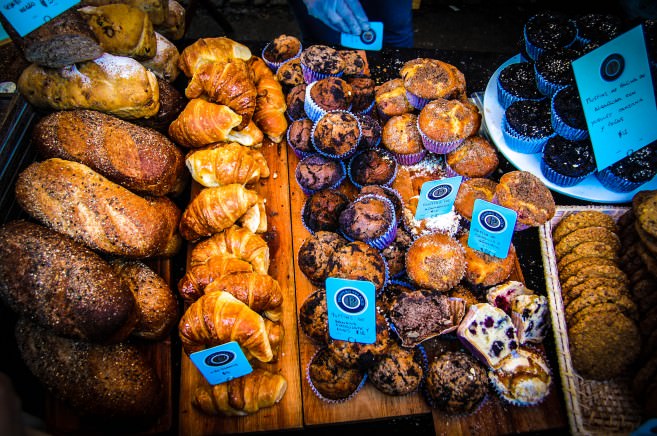 The French boulangerie of Buenos Aires deserves its own category, where masterful bakers boastfully exemplify the true art of French baking. From making the perfect loaf, to offering the ultimate flaky croissant filling, any of these seven spots will do you no wrong.

L’épi Boulangerie
Rosetti 1769, Chacarita & Montevideo 1567, Recoleta
Bruno Gillot and Olivier Hanocq are two certified Parisian masters of the French baking world. Living in Buenos Aires for almost two decades, both bakers have reached international acclaim as two of the best-known pastry chefs in the country. They opened L’épi in 2007 in Chacarita, and have been excelling in the world of baguettes, flautas and croissants ever since, bringing a second bread boutique to Recoleta. This pair keeps it old school by baking their bread in a woodfire oven that dates back to 1919, and following techniques and starter recipes from the olden days. Don’t be surprised if you turn on the local cooking channel and hear these two bakers with their thick French accents since they have their own program on ElGourmet.com.
http://www.lepi.com.ar/

Franck Dauffouis Panadería
Ambrosetti 901, Caballito
Hidden near Parque Centenario, Lusanger, Brittany native Franck Dauffouis opened this small panadería in 2009 after spending more than 10 years living in Buenos Aires. It is one of the top one-stop spots in the city for both bread and pastries, with favorites like baguettes, caramelized onion focaccia, olive ciabattas, berry scones, croissants aux amandes (almond), banana muffins, brioches and kouign-amann, or Breton cake, a round caramelized sugary butter cake. Extra tip: Franck says Saturdays are the best day to pop in – it’s when you can find the most variety of goodies.

Cocu Boulangerie
Malabia 1600, Palermo Soho
New to Palermo in 2012, three French friends decided to open a chic French boulangerie with a modern Soho-esque twist. Cocu specializes in breads and pastries, where it is known in the barrio for ten different types of breads that are baked a la vista, or the buttery viennoiseries that have been known to induce a serious addiction. While this corner spot offers baked goods to go (and great coffee para llevar!), there is also a comfortable dining area to eat in-house, with a breakfast, lunch and merienda menu that includes sandwiches, salads and quiches.
http://www.boulangeriecocu.com/ 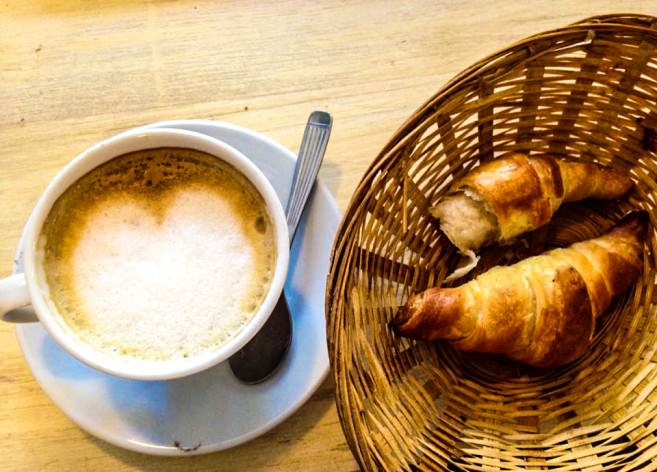 Le Ble
Alvarez Thomas 899, Colegiales (among other locations)
Once a Chacarita/Colegiales barrio go-to favorite for all things pastries, even though Le Ble has franchised and opened several locations across the city, it still remains one of the top spots for freshly baked carb-enhanced delicacies. Try the original location on Alvarez Thomas for that old school grocery store almacén feel with high ceilings and rustic décor. Sit down and drown in a massive fish bowl café doble with a flakey croissant, or stock up on the wonderful breads to go like brioche, focaccia or country bread. Weekdays (from 7pm – 8pm) Le Ble offers a 2×1 special on all bakery items.
www.leble.com.ar 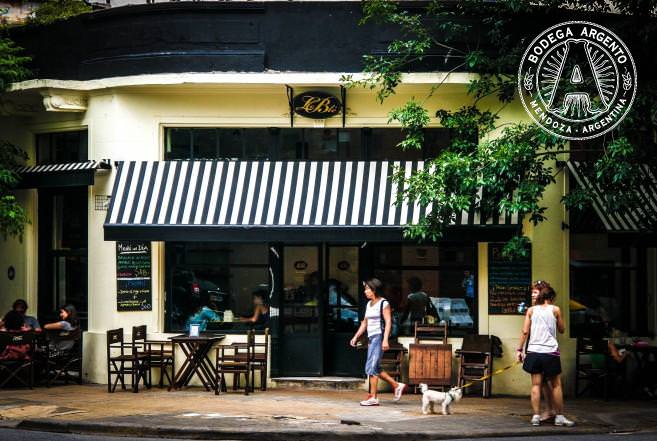 Le Pain Quotidien
Salguero 3075 & Armenia 1641, Palermo
A popular international chain that originated in Belgium, LPQ has made its way to Buenos Aires, premiering with two grand Palermo cafés and about a handful more locations in the works. Known for its communal table seating and high quality all-organic products, the breathtaking baked Belgian wonders coming out of this kitchen have made a lasting impression on the porteño palate. Wonderful breads, massive flakey croissant layers and gooey pain au chocolat – what more can you ask for?
http://www.lepainquotidien.com/ 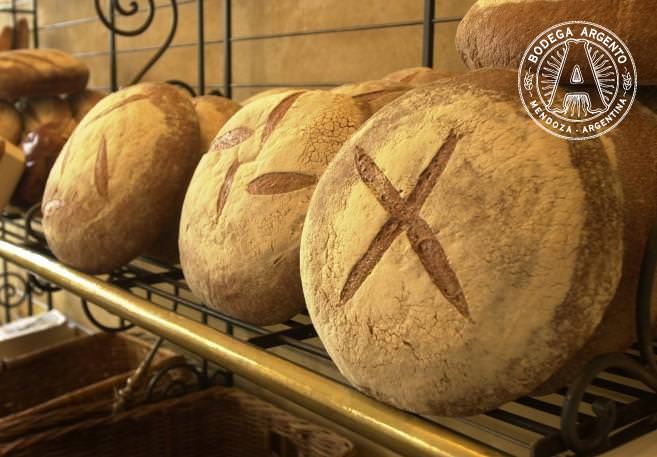 Oui Oui
Nicaragua 6068 y 6099, Palermo Hollywood
A Buenos Aires brunch staple café, Oui Oui also shines with its table of fabulous baked goods, offering an impressive spread of heavenly croissants, apple muffins and right out of the oven brioche. There are two locations on the same Nicaragua tree-lined street, both pretty in pink with smells of roses and fresh bread. Every day, one hour before closing, you can take advantage of 50% off on the bakery goodness.
https://www.facebook.com/pages/OuiOui/77751916258 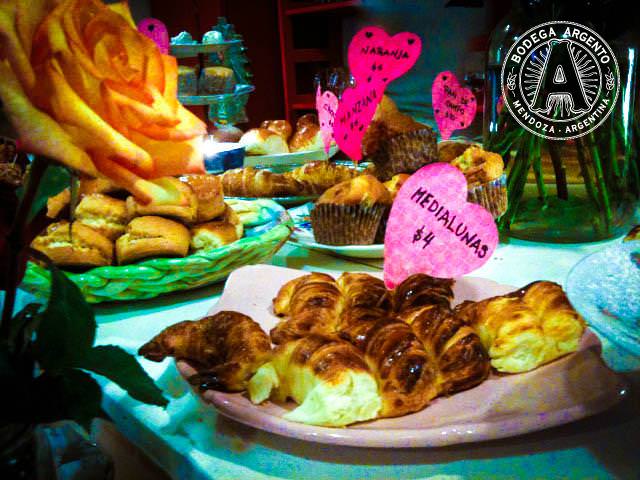 La Boutique de Jean Paul
Ayacucho 2027, Recoleta
Grand Chef Jean Paul Bondoux, who is behind La Bourgogne in the Alvear Hotel – one of the top eateries in Buenos Aires – has opened up a small pastry and bread boutique where there are a number of impeccable items available for take away: baguettes, croissants, cheese bread, macarrón and pain au chocolat.
http://www.boutiquejeanpaul.com.ar/

6 responses to “The Best Confiterías and Panaderías in Buenos Aires”