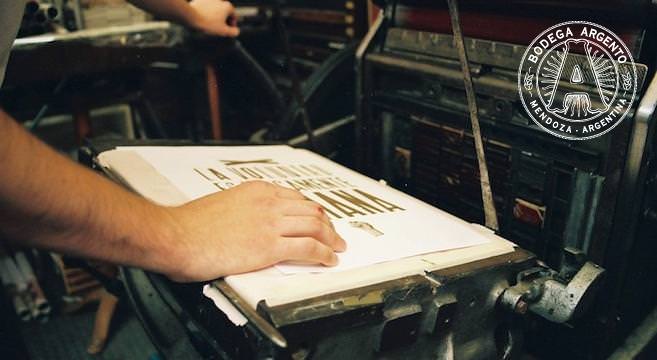 Argentina may not be as well known for its quality goods as it is for its steak, with “Industria Argentina” calling to mind infuriating impermeable coated napkins or the plastic paradise of Colombraro. But “Industria Argentina” could be interpreted as something else entirely – a support for the artisan and an appreciation and celebration of craft that continues to exist, not just in more rural areas of the country, where artisan goods are commonplace, but also in the capital.

The label “artisan” gets thrown about a lot, but there are some true artisans out there in hidden corners of the city, breathing life into forgotten methods of production, or applying their knowledge and skill to a particular product in a way that makes it truly unique.

Prensa la Libertad is an UBA trained graphic designer who stands at the helm of a tiny printing workshop in Almagro, creating everything from band posters to business cards. Stepping into this workshop is literally like stepping back in time. 2 giant printing presses, one from 1949 and the other one from the 1960’s, take up most of the studio, while old-timey wooden filing cabinets and a patchwork of tiny cubby holes housing letter and character blocks, paper and prints fight for the rest of the space on the exposed bricks walls. 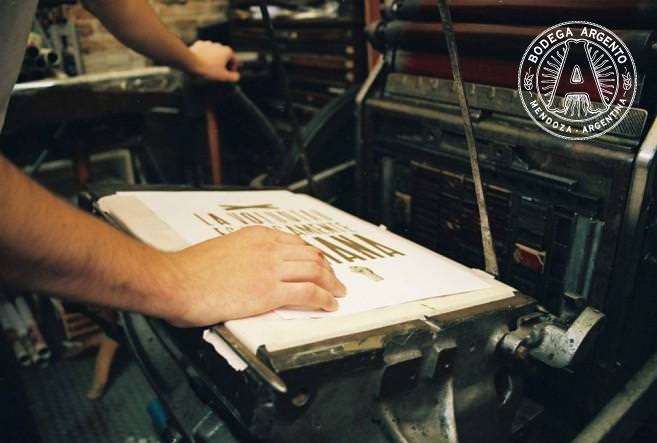 Prensa began working like this in 2008, where after some exposure to letterpress printing techniques (a form of relief printing where movable blocks of type are put into a printing press, then the blocks are inked and paper is pressed onto the blocks, transferring the ink from the blocks and creating an impression on the page), he realized that this method was the answer to many practical problems he was having in his design process and created an immediacy of production that was revelatory to him. He sourced the machines and the type blocks from print houses that were closing, but also uses the machines to experiment with printing from some unlikely sources; he once used a manhole cover to create a stamp, and passed records through the press to print with the texture of vinyl, and finds that this possibility for experimentation within a semi-industrial process deepens his connection to his work. His studio is littered with the kind of trendy trinkets you find in antique shops from Brick Lane to Palermo; large-scale alphabets and wrinkly, faded posters. But this isn’t decoration or pastiche; these are his tools and his work.

Across the city in San Telmo, a pair of photographers going under the moniker Studio Fotin is also winding back the clock. Creating hauntingly beautiful portraits that makes everyone look like they’re straight out of the Wild West, they use a photographic process called wet plate collodion from the 1850’s. Within a decade this innovative process had completely replaced its predecessor and made having your photograph taken more affordable to the masses, whereas previously it had been prohibitively expensive. 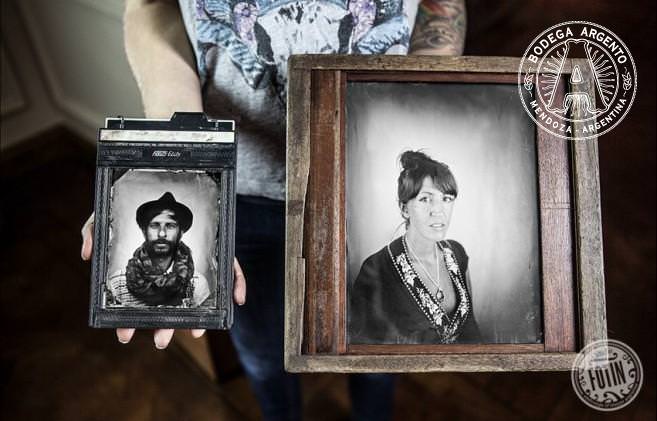 Studio Fotin, both professional photographers, had been on the lookout for a personal project related to photography to engage in, and when they came across this technique, they were sold. Because it was around before the advent of film, the chemicals used to develop the photos don’t even exist anymore, so they need to recreate the photosensitive solution by hand every time they take a photo, making the method an artisan labor of time and love, and a hell of a lot of trial and error. The collodion process can be done using a metal plate (tintype) or a glass plate (ambrotype, which Studio Fotin use), which the photograph is printed directly onto, making each portrait unique and inimitable.

The Process of Craftsmanship

Fotin and Prensa shared similar views on what make these outdated methods of production appealing to them. Both said that the personal and emotional connections to the process were something that drew them to it. For Prensa, it’s being able to see the ink on the paper and feel the weight of the print through the relief, as well as the physicality of the relationship between the product and the tool, which is completely different to digital design. As for Fotin, having to literally source and mix the photosensitive chemicals and then engage with the subject of the photo through the entire process is what is emotionally connecting for them.

Surprisingly, both also cited speed as a factor in their love for the archaic. Prensa says that if he has an idea, he can test it in a matter of minutes by selecting the blocks, arranging them in the press and creating a print. The process that Fotin uses takes 15 minutes to create just one photo. And there is no quality control, leaving vast margins for error. But they both say the imperfections are beautiful, and that having something tangible that you created with your own two hands in less than 15 minutes from start to finish is unrivaled in terms of gratification from something produced by digital methods.

Someone else who doesn’t rush his craft is Santiago Oliver, who lovingly restores and repairs old bicycles in his private mechanic’s workshop “Born In Garage”, tucked away on a residential side street in Colegiales. His love for bicycles started with a gift from his father, a BMX, when he was 8 years old. Inspired by the film “BMX Bandits” (and their teenages crushes on Nicole Kidman), Santi and his friends tried to emulate the tricks in the film, but quickly realised they needed to know their way around a bike to be able to do so. He was taken under the wing of a local bike mechanic, Claudio, whose workshop he spent hours in, receiving an almost “martial” education on bicycle restoration; focused learning by doing with the use of detailed books on bicycle repair, before the advent of the internet. 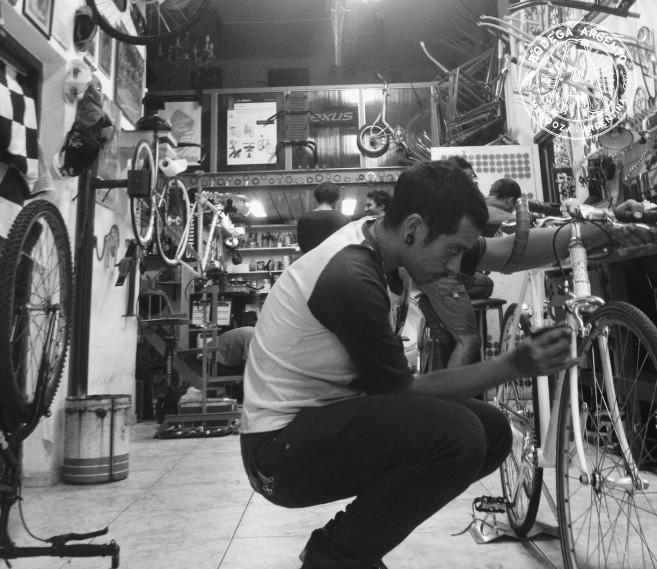 Working on bicycles at Born in Garage; photo by Sorcha O’Higgins.

Standing in his workshop today, old cogs and chains decorate the walls; gifts from friends and parts reclaimed from unwanted bikes, an ornamentation fitting of the place. Santi says “Everything you see here is pure heart, and dedication”, with the ethos being the same as Santi and his master Claudio – each of other mechanics in Born is an associate as opposed to an employee, so the passion and hard work that is cultivated in the studio is shared by all. There are many distinct differences between Born In Garage and a regular bike shop. First of all, it’s not a shop. You can’t walk in off the street and just buy a bicycle. The only bikes that are sold in Born are by a manufacturer called Zenith, and even these are customised by Santi and his team.

Secondly, this is not somewhere you go to pump up your tyres, or to get a flat tyre seen to. The minimum attention they will give a bike is a full service, which, for these bike lovers and professionals, can take more than a week. And lastly, the restoration work they do is specifically tailored to each bike. They work with bikes that “have a historic value, both emotionally and within the bike itself”. Parts are sourced for each bike depending on necessity, and no original part will be replaced if it can be restored. One of the bikes Santi is currently working on is a tricycle from the 1920’s, which has been passed down through 3 generations of the same family. Santi says “We know that perfection doesn’t exist, but we strive for it anyway”, and it shows.

The Craft of Argentinian Winemaking

And of course no celebration of craftsmanship in Argentina would be complete without mentioning its famed wine, in particular Malbec. Argentina’s wine industry echoes that of the country’s history itself, with the first vine cuttings being brought to Argentina by the Spanish, and subsequent grapes entering the country via its many immigrants: Malbec was brought by the French and Bonarda was brought by the Italians. Mendoza is the international mecca of Malbec, and illustrates how the craft of making wine has evolved over the years to produce something uniquely Argentine. 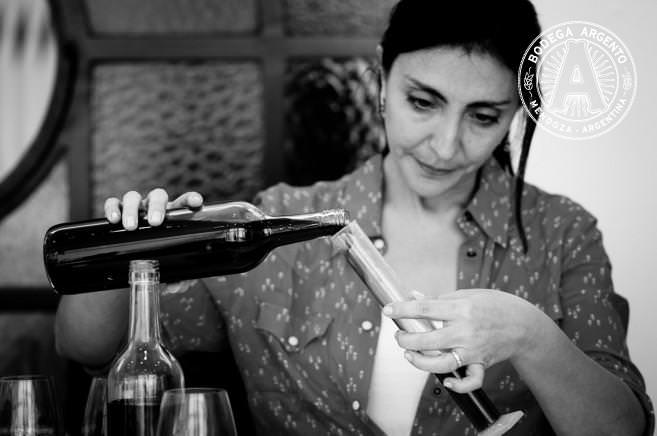 The first vineyard in Mendoza was established by Spanish missionaries in the early 1560’s, who brought their knowledge of viticulture to the Americas from their European heartland. Later, the French brought their vine cutting techniques to the region, along with the famed Malbec grape. Modern winemaking techniques have been brought by winemakers from California and Australia and taken on by Argentines, marrying these foreign methods of wine production into something altogether new and wholly Argentine.

The process of making wine itself is indeed a craft, with master winemakers coaxing their special breed of grape through all the necessary stages with a touch of magic to create a blend of wine that is truly unique. It is no accident that Argentina is so well known for its wine, it is the product of hard love and labor, and can be tasted in every glass.

One response to “The Art of Craftsmanship in Argentina”