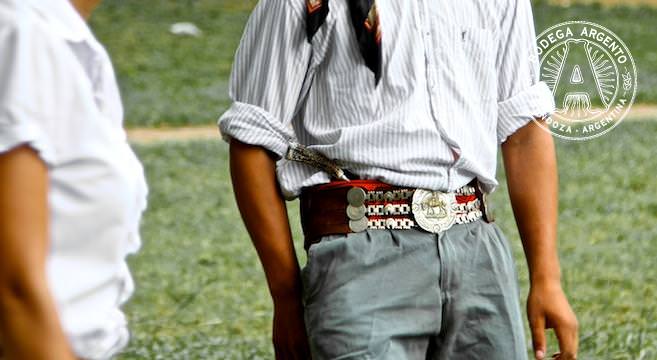 Let’s be honest. Part of the reason gauchos hold such fascination is because they look so damn cool. Driving to an estancia one day I saw two gauchos trotting alongside the country road lazily flicking up their leather whips and smiling briefly as we sped past. They are wearing traditional beret-like boinas and fastened around their midriffs we glimpse hefty knifes in silver sheaths.

I met them later in the only bar in a tiny hamlet and we share Bols (of course). They were wearing bombacha de campo, wide, pleated trousers that tie in around the ankle (like knickbockers). Around their waist is a faja, a patterned strip of woven fabric around two metres long (into which the knife was placed), and on their feet were Alpargatas (espadrilles). Martín and his son Martincito (really) also wore quite a bit of silver and leather. It was a Sunday after all.

Most visitors return from Argentina with some kind of gaucho clothing (I came with pretty much a full set and I’m still waiting for the right fancy dress party). Fajas are beautiful items – tightly woven and look rather good on the wall, and Alpargatas are incredibly useful, and my wife still wears her bombachas for horse riding.


Traditional clothing can be found all over Argentina, especially at the Feria de Mataderos market on Sundays and online clothing stores such as Gaucho Clothes – unimaginative name, but it’s great for their SEO.

The gaucho in Argentinian culture is immensely important, and in a city famous for the number of psychotherapists, it has been picked apart endlessly, but the influences are many, not least of all in the world of fashion. And we’re not just talking about espadrilles, which are, like, so 2011. The most explicit influence of gaucho clothing in the last couple of years undoubtedly came from Christophe Lemaire’s collection for Hermés, echoing Jean Paul Gaultier’s Spring/Summer 2011 collection.

Walk around Recoleta you’ll see it. Mara Hoffman, in Fall 2012, also plundered the gaucho cabinet (especially his headwear) for her collection.

And in 2014, the wide-legged bombacha trousers are back. Proenza Schouler showed a clear influence for its spring/summer 2014 collection, with suede and soft leather trousers. The extra-wide ‘gaucho’ pants can also be seen in the new collections from Rebecca Taylor, Derek Lam, Alexander Wang and Giorgio Armani. It won’t be long before this filters down to Top Shop.

In Buenos Aires, Palermo and Recoleta are still the epicentre for fashion, and Argentinian traditions can be seen in the very many design shops and fashion boutiques around its cobbled streets. Elements of leatherwork and silverware can be clearly seen in the windows. Where gaucho culture and high fashion mix most clearly is in Arandú (Paraguay 1259). Ponchos, bombachas, fajas, boinas, silverware and the hats are particularly sought after. 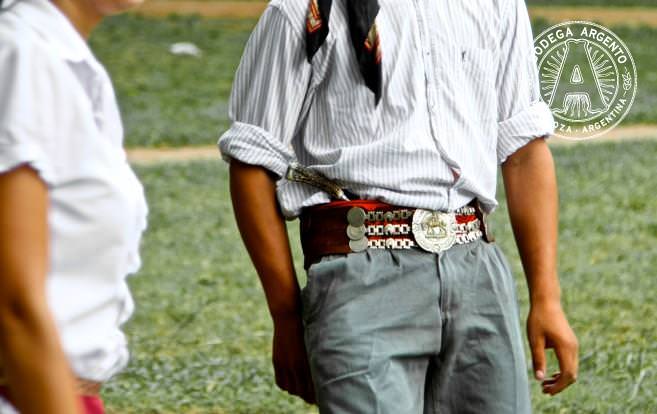 In the small, but established Buenos Aires chain of Rossi & Caruso, leatherwork is the focus, as is befitting its origins as a saddle maker. Today it sells more ‘rustic’ leather handbags for the Recoleta set. But its heritage is clear: the walls are full of grainy prints of rural scenes and Argentina’s other passion: polo.

The gaucho and polo player are linked of course. It was the gauchos who first played ‘pato’, Argentina’s national sport and also played on horseback. Polo’s top players are overwhelmingly Argentinian too. Polo wear is, of course, popular world-wide, but nothing beats an Argentinian jersey. For this head to La Dolfina whose ‘face’ is Adolofo Cambiaso, one of the world’s greatest ever polo players. Pick up a polo shirt and an update on Alpargatas.

For a pair of Argentinian-style Alpargatas with a philanthropic edge, TOMS is a bit of a phenomenon. While travelling in Argentina, American Blake Mycoskie saw children without shoes and created a company whereby for each shoe sold, a child in need would get a pair. It’s now a world-wide charity with children in Rwanda and Syria benefitting from a pair of espadrilles.

It’s not all leather however – the colours and materials of the Andean cultures in the north of the country have not only been an influence on fashion designers, but they are using the skills of artisans in the northern provinces of Salta and Jujuy to produce bespoke works. elementos argentinos sells rugs (you can even design your own) and other beautiful homewares hand made in the north. Calma Chicha (Honduras 4925, Palermo) stocks wonderful cow-skin rugs and other rural influenced homeware items.

While the ‘gaucho’ look is something that seems to be in and out of international fashion every couple of years, there’s no doubt you’ll find the original items, plus some modern interpretations at any time in Argentina. Just be sure to head into the countryside and experience it for yourself – the gaucho is not a long-gone myth, but still well and alive on the back of a horse in the pampas.