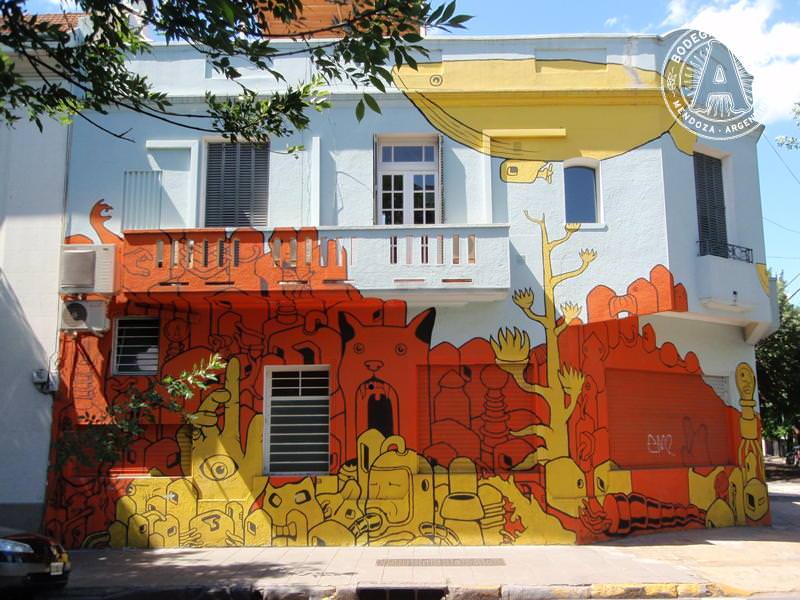 Graffiti (or ‘street art’ to its more ardent followers) has enjoyed a coming of age over the past decade. Ever since artists such as Banksy and David Choe brought the once dark art to the mainstream, up-standing citizens have been seeking out stencils and wall-murals with the same fervour as a Monet or Da Vinci.

Tourists with a new-found penchant for graffiti will be in heaven in Buenos Aires. The city known for tango and cow-meat is fast gaining renown as a street art powerhouse. In fact one of the unexpected joys of wandering the streets of the Argentine capital is stumbling across strange and beautiful artworks on the sides of buildings, walls, rubbish bins and lamp posts. It’s a bit like walking through an open-air gallery –- on one building two huge wolves go head-to-head in mock battle, around the corner a blue monster pokes an oversized fork into his friend’s head, down in a nearby alleyway a giant hand points ominously to the main road. And that’s just in Palermo. 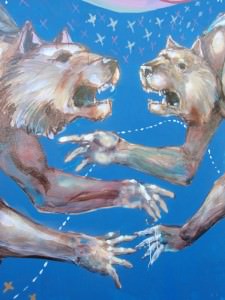 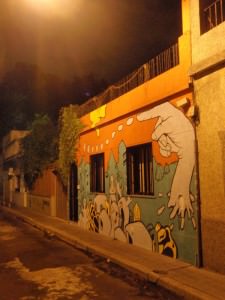 h2. A History of Street Art and Graffiti in Argentina

Graffiti has a colourful history in Argentina. It began in Buenos Aires in the 1950s and 60s primarily as a form of political expression. Groups were paid to paint slogans promoting political parties, a practice which still continues today. Simultaneously a more artistic form of street art began to develop which incorporated imagery – sometimes also political, but often purely aesthetic. Aspiring artists began to see unused street walls and buildings as a viable alternative to gallery canvases. 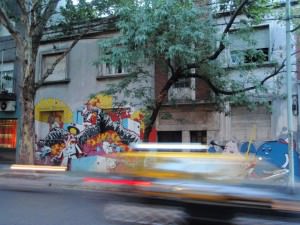 All this came to an abrupt halt between 1976 and 1983 when a military dictatorship held power and banned all form of protest. There was a slow recovery in the 1990s, but the real explosion came after 2001 in response to the financial crises that, at one point, saw one in five of Argentines out of work.

Interestingly much of the work that came out of that period was not politically driven. Instead artists opted for colourful, playful and humorous designs, aiming to brighten the spirits of the unemployed and newly poor. This style still dominates the Buenos Aires scene today and distinguishes the city’s artwork from the more cynical and political graffiti in other cities around the world.

Huge murals – in brilliant oranges, yellows and greens – are everywhere in Buenos Aires. They are sometimes strange, often captivating and always fun. One mural, painted on the side of an artist’s own house, depicts a dreamlike barbeque scene – a blue man holds a string of sausages while a giant cactus monster dances in the background. A building nearby features an enormous yellow jet-powered whale floating up towards the sky. If you can find political statements in these works, you’re probably thinking too hard. 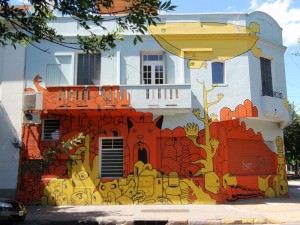 Another fundamental difference with the scene in Buenos Aires is the implicit co-operation of the police, who rarely hassle artists. That an artist can set up on a Sunday afternoon to paint a disused wall, un-worried about being moved on (or arrested) means that the art can be much larger, more detailed and more complete. Contrast this to works in London or New York which must be created in the cover of night and at lightning speed.

As in other cities, Buenos Aires’s artists have developed distinctive individual styles and after a few days walking around the city you will see some recurring themes. The artist Nerf uses complex 3D lettering, many of the works by Jaz feature Lucha Libre Mexican wrestlers, cabaio uses intricate stencils and so on. Many artists sign their work; some even include website addresses. The artists here are not faceless underground figures, quite a few have ‘real’ jobs on the side as graphic designers or architects and a number sell more traditional canvas works in galleries. 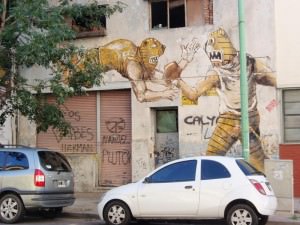 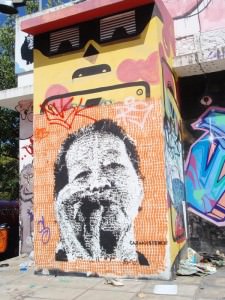 The general public have also caught on to the value of quality street art in Buenos Aires. Many of the artworks you will see in Buenos Aires are commissioned pieces. For example Tegui, a restaurant in Palermo, commissioned its entire outside wall to be covered by stencil artist cabaio. It has since become an iconic location in the area and has the work has had the added bonus of keeping taggers away (the building opposite is covered in ugly scrawls). 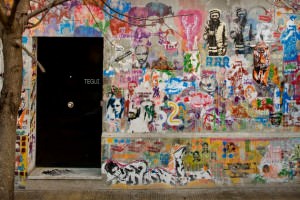 Street art can be found throughout Buenos Aires but if you are on the look-out for the best work, start your exploration in the barrios of Palermo, Villa Crespo and San Telmo where there is the greatest concentration. Keep in mind that, as in all cities, Buenos Aires’s street art is forever changing – paint fades, walls crumble, artworks get covered over. Today’s green cactus monster might turn into tomorrow’s portrait of a purple pig. But as long as the government, police and general public continue to embrace this form of art, the streets of Buenos Aires will be brightened for the better.

For a comprehensive exploration of the best pieces of street art in the city, take a tour with graffitimundo. They run 3-hour tours every Wednesday, Thursday, Friday and Saturday.

Finally, a couple more of my favourite pieces of street art around Buenos Aires: 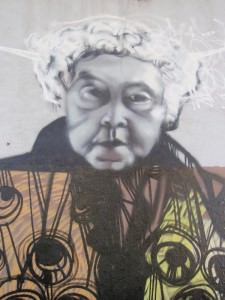 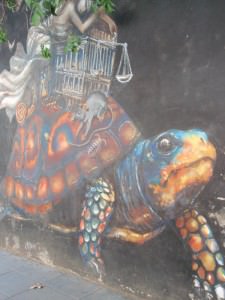 As a child James was subjected to endless anecdotes about his parents' trip along the Hippy Trail "back in the 70s". The brainwashing worked and James has been an avid traveller ever since. Argentina has always been on 'the list' and James realised the dream of spending a month in Buenos Aires in late 2010. James is a freelance writer who has worked for The Sydney Morning Herald, The Melbourne Age, Real Travel and MSN Travel.

4 responses to “Street Art in Buenos Aires: So Much More than Graffiti”