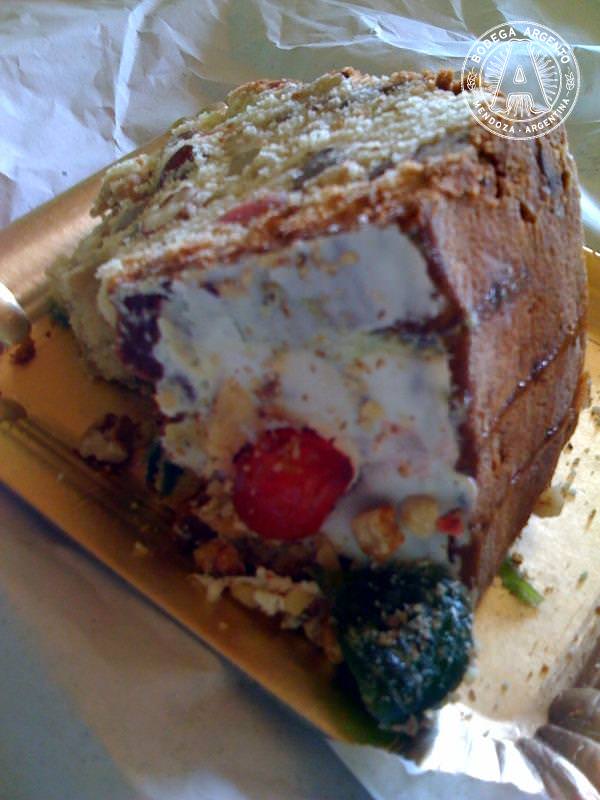 Christmas in Argentina, as those with even the most rudimentary grasp of geography will know, occurs at the height of summer. With that in mind, you’d be forgiven for assuming that the locals in this part of the world have sensibly revamped their yuletide festivities to take account of the hot weather.

Assume again. When it comes to seasonal Argentina culture, Argentinians are fond of the customs they inherited from their European ancestors – particularly those involving heavy food and heady liquor – and see no reason to change or even adapt them. If there is an Argentinian Christmas innovation, it’s the prodigious use of high explosives in the domestic setting (of which more below.)

If my own Argentinian family is anything to go by – and this will be my ninth Christmas here – the following is a pretty accurate account of how most locals pass the festivities.

Late afternoon Assorted family members, many of whom languish in obscurity the other 364 days of the year, begin arriving at the host venue. They will immediately fall upon the snacks and nibbles: dried fruits and nuts bañadas en chocolate (covered in chocolate), garrapiñadas (caramelised almonds), turrón (nougat), the iconic Mantecol (a ridiculously sweet brand of halva introduced to Argentina by Greek immigrants in the 1940s) and the essential pan dulce (a faithful version of panettone, the blond sponge cake studded with candied fruit so adored by Italians). All this is washed down with either tea, yerba mate, sidra (cider), or the ghastly sweet sparkling mixer known as ananá (pineapple) fizz. The latter is sensibly reserved for special occasions since drinking it habitually will have a similar effect on your teeth as smoking crystal meth. 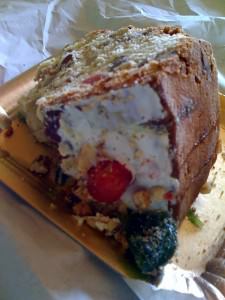 c.10pm The family sits down for a proper, albeit very informal, meal comprising several cold dishes the women prepared earlier (I’ve yet to attend one of these affairs at which a man has lifted so much as a finger, let alone a rolling pin). The menu varies from household to household but will almost certainly include vitel toné (cold veal slathered in tuna, mayonnaise and capers) and pavita (cold turkey). Pudding will be ice-cream and plenty more pan dulce.

As for drink, the rational thing to do on a summer evening like this would be to sink a few cold beers or perhaps a glass or two of Sauvignon Blanc. So naturally Argentinians get stuck into the heaviest, most enervating red wine they can find; usually a young, mid-priced Malbec. No-one winces when Grandpa hoses this down with a shot of soda, and no one gets fall-down drunk. Not yet, anyhow.

c.11.30pm The least beloved male member of the clan (a disgraced son-in-law comes in handy here) is sent to the garden shed and told to get into his polyester Santa suit. A less suitable garment for a humid evening is hard to imagine and our poor, phony Papá Noel will feel like he’s been smeared in honey and then rolled in fibreglass.

11.55 Gifts exchanged, it’s time to turn on Crónica, Argentina’s top basic-cable news channel, where the countdown to midnight is displayed in lurid (but iconic) white-on-red. At this point the paterfamilias must stir from his lethargy to uncork the champagne for the brindis (toast). And since Christmas morning always brings stories of hospital emergency wards struggling to cope with the post-midnight influx of cork related traumas, we must conclude that even this fairly simple task is sometimes beyond him.

Midnight For many this is the business end of the festivities. The tribe pours out into the garden – or if there’s no garden, into the street – and sets about igniting the night sky with pyrotechnic devices. There are no organised fireworks displays on Nochebuena, but many thousands of disorganised ones. Not every household gets busy with the gunpowder, but if you’re a tinnitus sufferer or an elderly dog with a heart condition, that’s how it will feel.

Check out this YouTube vid of some Argentinians celebrating Nochebuena:

Morning The smoke clears to reveal a country that is, by its standards, spookily quiet. Folks rise late, pour themselves a coffee, nibble on a slice of pan dulce and check that their garden shed didn’t burn down during the night.

Afternoon No Argentinian celebration is complete until some meat has been sacrificed on the altar of asado. As the temperature soars into the mid-80s, the man of the house (for this is his moment) lights a big fire beneath his garden grill. Since special occasions call for special cuts, he’s likely to throw something more exotic than beef ribs over the coals. Cordero (lamb) and chivito (kid) are both popular choices, but the loudest applause is reserved for the asador who brings lechón (roast suckling pig) to the table. It should be served with ensalada rusa (Russian salad). 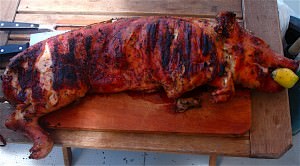 Half a lechón roasted by my friend Tim, Christmas Day 2008 – Photograph by Matt Chesterton

4 responses to “Have Yourself a Merry Little Navidad: Christmas in Argentina”