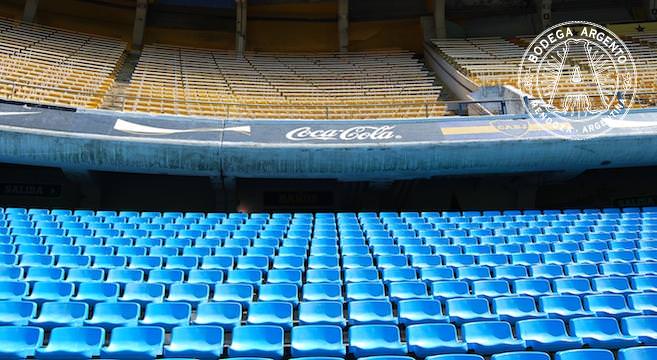 The latest in our series of interactive guides turns its attention to football (it was only a matter of time). Here we look at an eclectic bunch of stadiums, restaurants and sights. View The Real Argentina’s whole Interactive Football Map of Buenos Aires in a single, larger map. (Also see our previous Interactive Foodie, History and Art Walks of Buenos Aires.)

The sky turns momentarily white with ticker as Boca Juniors emerge on to the pitch. Blue and gold then resumes its place as the dominant colours. Flags swirl, banners fly, balloons reach high into the clear Buenos Aires sky. The communal voice of 50,000 of Argentina’s most fanatic fans overwhelm the Bombonera, or the Sweet Box, named because of its vertiginously steep tiers, around which the racket echoes. Shoulders, elbows and bare chests flail and barge. Shirts are swung, songs screamed out. Frenzied fans let off fire crackers and fireworks. On the east stand drums beat and horns blast, while above them the outnumbered enemy, dressed in the red and white jerseys of River Plate, try their best to drown out the Boca crowd and if that doesn’t work all manner of chairs, coins and bodily fluids land on the Boca hardcore below.

If residents six kilometres away had managed to avoid the weeks of build up, constant world-wide media coverage, cancellation of buses, taxis and public offices, they would still know that Boca Juniors are about to kick off against River Plate. How? The ground shakes.

Buenos Aires comes to a halt when Boca play River Plate. It’s the superclasicó, and it is, quite simply, most visceral and thrilling football experience in the world. Argentina lives and breathes football. As a baby, you are anointed a team. Most of the conversation, it seems, revolves around politics, but mostly, food (food and wine get a good look in too – but this is football.

The best way to experience it is, of course, to go to a game. But the all round sketchiness of an Argentinian football game is well know, and it’s best to go with a local or a guide such as Tangol. We also suggest buying the pricier tickets – the platea or platea alta, the cheaper popular is where all the noise is coming from. Some stadiums (and the crowds that go there) are also friendlier and more accessible than others. Here’s a brief guide to those clubs, but also the bars, cafés, museums and sights that, in some way, are more touched than most by fútbol. 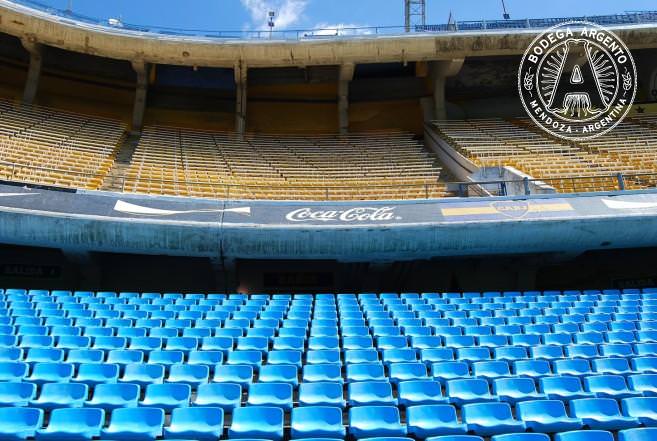 La Bombonera
River Plate fans may want to avert their eyes here, but La Bombonera is the centre of the footballing world – the place most synonymous with football here. It’s officially called Estadio Alberto J Armando, but I’m not sure the taxi driver would even know that. If you go for a match, turn up early and soak in the atmosphere. Certain areas around the stadium and some stands can get dangerous, but a guide will help. www.bocajuniors.com.ar

Museo de la Pasión Boquense
If it’s not game day, there’s a really good museum that gives a good, and wholeheatedly biased insight into the club, plus guided tours of the stadium. There are loads of audio-visual things to twiddle, loads about Maradona, and a shop that supersedes even Manchester United for merchandising audacity. 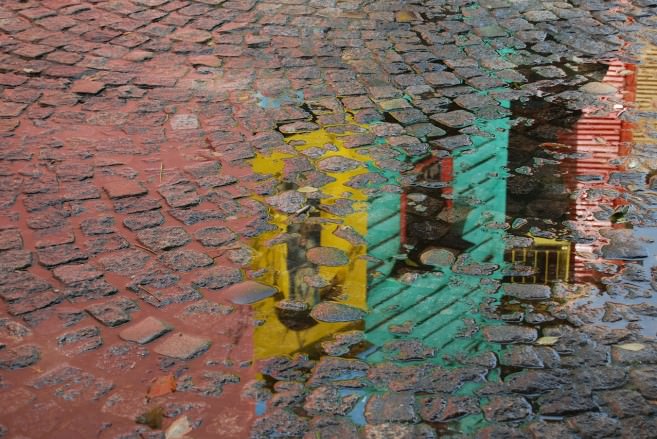 Caminito after the rain; photo by Kyle Smith.

Caminito
Tourist trap, yes, but this small street in La Boca is impressive nonetheless, and a albeit sanitised version of the rest of La Boca. But the overwhelming colour? Blue and gold of course – there’s some great Boca Juniors mural work along here.

El Obrero
This restaurant in La Boca has seen footballing (and film, boxing and music) greats walk through the door – just look at the pictures on the wall. It does great stonking steaks and also great pasta dishes. And look closely.. is that Maradona in the corner? Get a taxi here no matter how close you are! (Agustin Caffarena 64, between Ministerio Brin and Caboto).

El Cuartito
To make it as a restaurant, you need a photo of the owner next to Maradona. Tick, El Cuartito (Talcahuano 937) has it wrapped up, but it also serves up amazing pizza. In fact, the theme of football, and sport, runs through this atmospheric pizza joint.

Club Eros
If you like the sound of sweaty amateur football players smacking against walls with your beef (it couldn’t be further away to what the name suggests), this down-to-earth Palermo sports club is the place (Uriarte 1609). There’ll be football on the telly too, but it’s a firm favourite for a post-five-a-side meal for next to nothing. 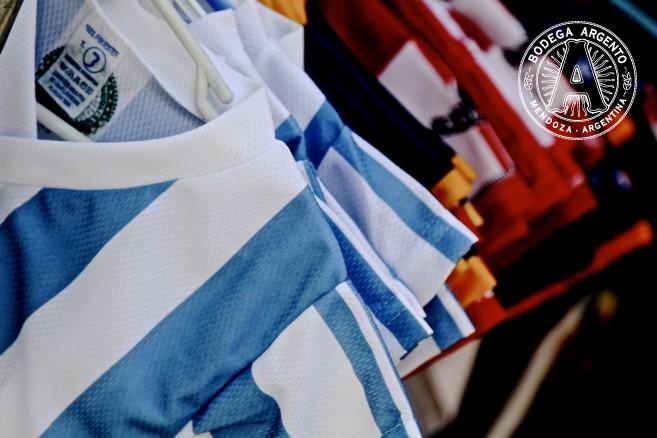 Hotel Boca Juniors
To cater for those less football mad, or mad about other teams, the blue and gold of brand Boca is understated in the starkly designed hotel, due to open in 2010.

“It is a magical space with subtle touches so that the players feel at home during their meetings, and the guests can feel the passion,” reads the bombastic blurb. www.hotelbocajuniors.com

El Obelisco
If your team wins, or the national team wins a big game, it’s here where the fans tend to congregate to celebrate. Flags fly from cars that surround the downtown icon, with blaring horns blasting. On the steps, fans hug and sing, probably derogatory, songs about who they have just beaten. Great fun. 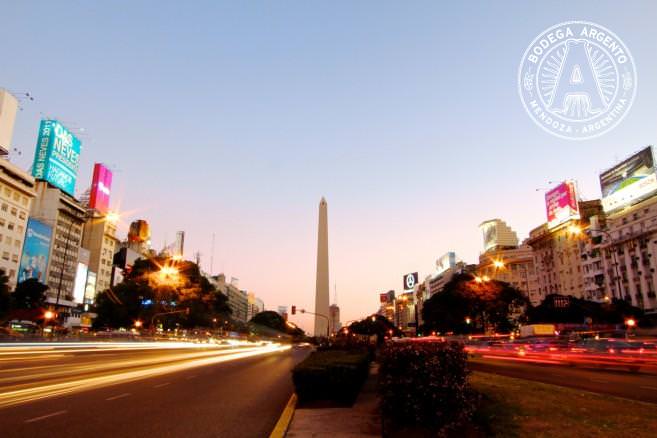 Estadio Monumental
River fans will attest that this is the centre of the Argentinian footballing world. And actually, they’re right, it is here the national team plays, and the biggest stadium in the country. It’s also in a much nicer part of town (Núñez) than Boca, so is often safer, plus it is easier to get away from the rowdiness, should you want to. www.cariverplate.com.ar

Museo del Rugby, San Isidro
The Pumas are one of world rugby’s success stories. They field a good, solid team, and their players are spread around Europe and the antipodes. Sure, it’s a little cry in a maelstrom of football choruses, but we thought a little mention for this little museum dedicated to the oval ball is worth a look when the football becomes too much, which it will. National rugby games tend to be played at the Club Atletico de San Isidro. www.museodelrugby.com

Play it yourself
Finally, if all this football action has got you inspired, there are five-a-side centres all over the city. A couple of the better ones include El Parque Futbol and Madero Sports. 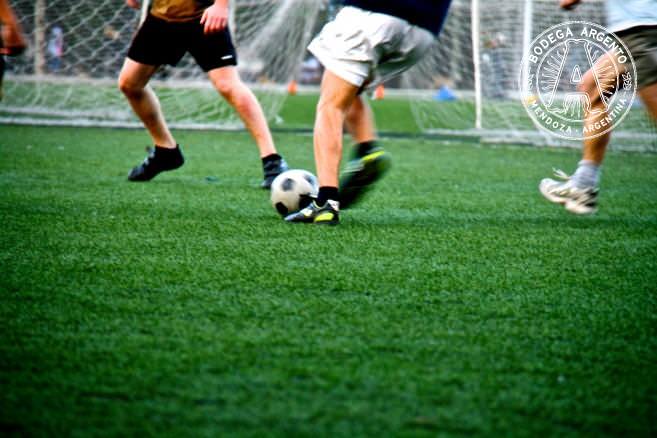 One response to “Football Map of Buenos Aires – An Interactive Guide”