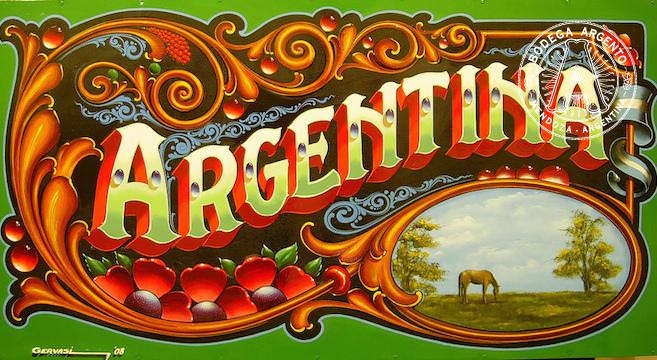 If you’ve never been to Argentina, you might think it’s just another large land mass in the already vast continent of South America, except with cold bits in it. Alright, alright, I hold my hand up and admit that I too knew next to nothing about Argentina before I came here, but boy did I catch on quick. Landing in Buenos Aires, people were swift to alert me to a slew of now familiar idiosyncrasies that are unique to this southern territory, and to its capital in particular.

The local culture in the port city of Buenos Aires is shaped by the immigrants who landed here from Europe in the late 19th and early 20th centuries. The residents of Buenos Aires are called porteños, or “people of the port”. The language they speak is castellano, which is Spanish, but spoken with an almost Italian accent and animated by various Italian-style hand gestures and local slang, called lunfardo. The rhythm of tango is at once music and a dance that courses with passion through the veins of the city dwellers, carrying them twirling late into the night at any of the city’s famous milongas, or tango dancehalls. And of course, a city such a Buenos Aires would not be complete without its own form of art. Enter fileteado.

The Origins of Fileteado

Fileteado is as porteño as a flock of riled-up Boca fans, although perhaps a little more sedate. It is a form of decorative art that originally started out adorning wagons in Buenos Aires in the early 20th century, painted by the Italian immigrants who worked in the wagon factories. Soon, it began to appear on trucks and buses and can now be seen everywhere from shop windows to metal plates sold at market stalls to giant advertising billboards looming over Avenida 9 de Julio.

Fileteado is a highly stylized art form, combining lines and decorative motifs that usually form a frame around an image or a typeface. It is instantly recognizable, and is made up of the following elements:

• Stylized lines, or “filetes”, meaning threads.
• Use of shading to create a feeling of depth within the piece.
• Rigid use of symmetry.
• The use of bold, primary colours.
• Use of Gothic or highly detailed lettering.
• Use of symbolic imagery i.e. a horse shoe to represent good luck.
• The decoration is used to frame an image or text in the center of the piece.

Fileteado evolved as painters began to take inspiration from more local sources; neo-classical architecture, which gives the art its spirals, and popular social and cultural themes. Fileteado began providing a commentary on the city and its characters, with famous porteños like the poster boy for tango, Carlos Gardel, becoming synonymous with the medium.

Because of its ubiquity and the fact that it was found in the streets, fileteado was not recognized as an art form until 1970, when it was first exhibited by Esther Barugel and Nicolas Rubio, who had collected various pieces of the art. In 1975, it was banned by the military dictatorship because it was deemed confusing to passengers trying to decipher bus numbers and routes amidst the decoration, a ruling which was reversed in 1985. Fileteado suffered a major decline after this ban, with many of the original artists passing away and most of the workshops where the medium was practiced closing.

However, it has seen somewhat of a renaissance in the recent past, and one man in particular has had more than a hand in reviving the Argentine art of fileteado. Alfredo Genovese is something of an expert on the subject, not only being one of the most well-known and prolific fileteadores in the country, but also having written 4 books about his chosen field. 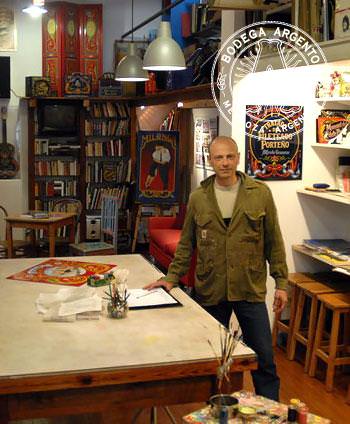 Alfredo has been practicing the art of fileteado for more than 20 years. He studied lettering in the Prilidiano Pueyrredon School of Fine Arts and was surprised to learn that fileteado did not appear on the curriculum. Taking matters into his own hands, he studied under fileteado master Leon Untroib for two years and eventually traded in his sign-painting career for that of a fileteador.

What’s interesting about Genovese is that he is one of the only people who is bringing fileteado into the 21st century. He enjoys the challenge of taking an old way of working and pushing it to its limits and seeing how far it can go. His methodology is still incredibly artisan and he never creates any of his designs digitally. He first draws the design by hand onto paper, then uses powdered lead to transfer the image onto what it will finally appear on. A small format piece can take up to 4 days to complete, so it really is a labor of love.

He has painted fileteado on pretty much anything you can think of; from live cows to the floor of the Faena hotel to Coke bottles. Currently he is working with tattoo artists and is exploring how fileteado can be developed as a form of body art. He even has one of his own designs inked on his arm, so you can be sure you’re in good hands! He is also at the forefront of spreading the good word of fileteado worldwide by giving seminars and workshops internationally.

Thanks to people like Genovese and even to those selling mementos of fileteado in places like San Telmo market, this form of art that is unique to Buenos Aires is alive and well and does not look set to be dying out any time soon.

For more information on Genovese and his work, visit his website at www.fileteado.com.ar.