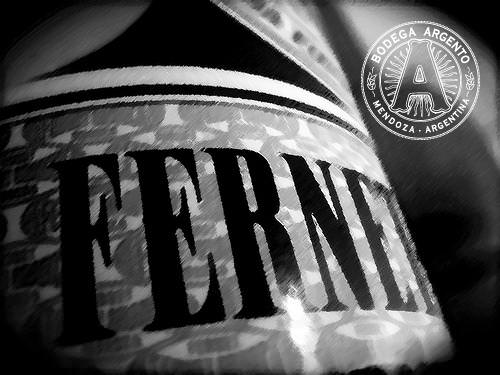 The first time I tasted Fernet I hated it. I was young (and for legal reasons I will not say how old, just in case the alcohol police are reading) and just starting to go out with friends to “los Boliches” (discos) and bars around Mendoza, Argentina. That black bitter drink, strong as hell and sweetened with Coca Cola, was not my ideal dancing partner. Diluted lager beer served in a simple plastic tumbler was more agreeable with my inexperienced liver and empty pockets, until…

I do not remember the day the love affair started. If it was a question of my palate changing, taste buds maturing, or the fact that a guy seemed to increase his chances of pulling the blondes after a few glasses of Fernet with 45% abv. It may have been both at the same time – who knows – but from that point onwards “un Fernando” (remember the ABBA song of the same name) has since been part of my drinking experience. Many, many years before the wine bug took hold of me, I have to confess.

During my university times when the dating game started, I used Fernet as a way of filtering girls. Fernet-loving girls fell into the “cool with potential” box, and the non-drinkers into the “not-in-a-million-years-unless-your-sister-is-as-hot-as-you-and-drinks-Fernet”. You have to admit it was simplistic, but it worked. I needed to ask just one question: “What would you like to drink?” If destiny dictated that her lips muttered the answer “…just a Diet Coke please,” I knew that very minute I was wasting my time. Not even that pair of Kylie Minogue’s hot-pants could save the night.

h3. The history and the facts

The Italians – as many other things in Argentina – brought with them the culture of the amaros (bitters). Used originally as medicine, amaros later became useful in curing the “pains of the heart,” as they called it. One only needs to listen to a Tango song from the 1900s to understand what I am taking about.

Fratelli Branca spotted the potential of Argentina in 1925, first producing Fernet in the country by importing the herb extracts directly from Milan. In 1941 they established their industrial facility in Parque de los Patricios, Province of Buenos Aires. Today, after moving and expanding the plant to Tortuguitas in 1982, Branca produces more than 24 million litres of the black herbal digestive.

The consumption of Fernet in Argentina is spread across all provinces and follows in third position in the alcoholic drinks rankings, after wine and beer. But the province of Cordoba, with 3 million people, consumes a whopping 30% of the total. There Fernet has an almost religious following. The province’s prodigal son of sport, Angel Cabrera, after winning the 2007 Golf US Open, declared in an interview that his celebration would involve a glass of his adored Fernet con Cola rather than a victorious bottle of bubbly. Cheers for the Cordobeses!

Are there any other brands? Yes, they are: Porta, Vittone, Capri, Ramazzotti, Luxardo, Martini, Cinzano, and recently 1882. New brands were launched in Argentina with great eagerness after 2001 when the economy went tits up and our pockets deflated. However, no matter how skint you are, the liquid produced by the brothers Branca is the king. Similarly, the mixer is just one: Coca Cola, not Pepsi. Maybe it’s the level of sugar, but believe me, Pepsi does not work. However, at “El Cacano” (the colourful bar on the corner of Plaza de Chacras, 50 metres walk from Casa Argento, in Mendoza) for some silly promotional reason they serve Fernet with Pepsi. So if I were you, I would have a local beer. What are they thinking? Can you imagine Tom without Jerry, Homer Simpson without Marge, Romeo without Juliet, or Popeye without Olive Oyl? These are loving partnerships that are meant to be together.

h3. How do you prepare the perfect Fernet con Cola the Argentine way?

Put the ice-cubes in the tumbler. Avoid using more than 3 ice cubes or the final result will be too watery. Add the measure of Fernet, and then slowly pour in the Coca Cola. Allow that brown chocolaty foam to rise in the glass. Then the vital Argentinean touch: we kill it! Just before the foam reaches the brim, add a few more drops of Fernet – and surprise! – it stops rising. These extra drops are essential. They give the first sip that added punch of bitterness that we have learned to love so much. 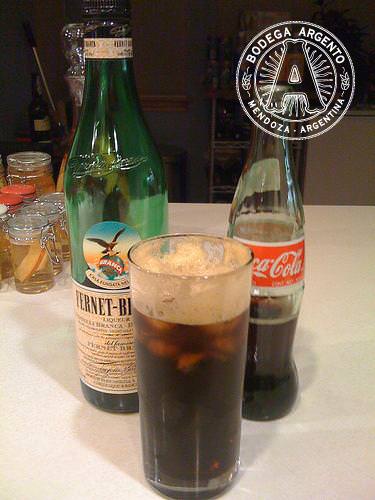 * Fernando: The most common nickname for a glass of Fernet. It is the extra friend that comes to every party.
* Fernucho: Another friendly nickname.
* Cabezón: (Big headed) A strong glass of Fernet. It has more Fernet than cola and whoa… it kicks you backwards.
* Matálo: (Kill it, kill it!) The final touch, adding those extra drops of Fernet to “kill” the foam.

h3. When in Mendoza, Argentina

For the wine tourists visiting Mendoza, the best place to taste Fernet is in the bars of the Aristides Villanueva Street. This avenue got pretty trendy in the last 10 years and every time I visit I find a new bar, restaurant, resto-bar (our equivalent gastro pub), or just a new convenience store which spotted the potential and sells drinks with tables and chairs on the pavement. Along this street you will find many reincarnations of the drink presented in different formats:

* Sold by the glass, already mixed – for the single minded
* To share for two: one tumbler full of Fernet with two extra glasses and two cokes
* Same as above, but for one – for those with a larger appetite and keen on double measures
* And the mightiest of them all: the Super Dupa One Litre Mixed Jar – easily accommodates a party of 4 people and leaves room for second rounds

So that’s it amigos. Enjoy our national Argentinean drink (second only to our wine of course).

Juan Lo Bello is a contributor to The Real Argentina and Sales Manager for The Argento Wine Company. Find out more about Argento at www.argentowine.com