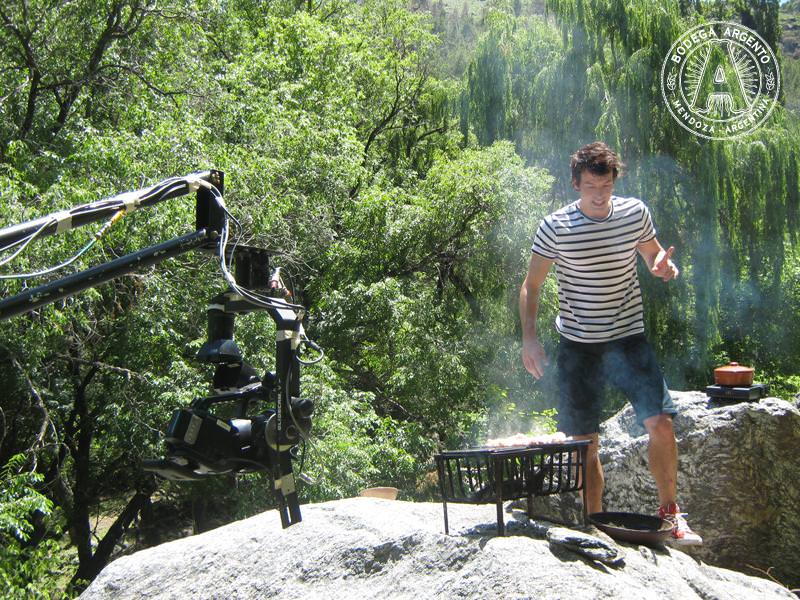 TV chefs don’t just work in immaculate studios, they also film on location to tell Argentina’s culinary story. But away from the comfort of the studio or test kitchens, unexpected situations often arise in makeshift kitchens. From carparks to mountains, fields and rivers, Narda Lepes, Roberto Petersen, Dolli Irigoyen and Pedro Lambertini share the backstory to some curious kitchens.

Celebrity chef Narda Lepes inspired this post after she showed me around her one-night wonder of a kitchen on the top floor of Buenos Aires’ ACA (Argentinean Automobile Club) charity dinner for ArgenInta foundation. She travels frequently to cook, so it’s difficult to narrow down just one curious kitchen. Brimming with anecdotes, she and her mobile Boca De Lobo team have cooked in a carpark for a fashion designer, at Boca Juniors football club, constructed their own ovens to cater for 200 diners and dealt with tardy chorizos – the mind boggles – as well as surly waiters.

Narda says: “In this photo, we’re at Boca Juniors as the football club’s nutritionists invited me to prepare a post-training lunch. While the kitchen was good, the issue was that some of the players had quite simple palates, so we had to disguise the food so that they’d try something different. Also, I didn’t know who any of them were, and without realizing I asked the star of the moment – Gago – his name, and they all laughed at me!” She adds: “But I think they liked my ignorance.”

Meanwhile, one new year’s eve, Narda and the team were cooking in a basement. Guess where the diners were? “On the terrace! We cooked for 150 people in 2014 and given that the kitchen was in the basement, it was chaotic going up and down to the terrace a thousand times that night. Agapornis played, however, and as it was our last event of the year, we celebrated and danced a bit.”

On TV screens for 25 years alongside brother Christian, Roberto Petersen has cooked in his fair share of curious kitchens. Currently in Los Petersen Vikingos on El Gourmet, I met him at Madryn Al Plato, Chubut,  in July 2015, where true to form, he and Christian were sautéeing vats of prawns in garlic and olive oil on Puerto Madryn’s seafront. One of his more curious culinary experiences also took place in Patagonia.

Roberto says: “I’d been invited to cook in Bariloche by a former cooks of ours, Richard Oyarzún. What was curious about that particular meal was that it took place 2,000 meters above sea level up Mount Tronador [an extinct stratovolcano], more precisely at Otto Meiling refuge. This refuge is set among the Overa and Alerce glaciers, a magical place where, for every moment of silence, you could hear the ‘thunder’ from the glaciers.”

While preparing the meal itself wasn’t tricky, Roberto says logistics most certainly were. “Putting together a picada at the refuge wasn’t difficult but getting rucksacks filled with food for 50 guests to it… was a different story. And although this wasn’t the first time I’d been to the refuge, it was the best.

With dozens of TV series, cook books and DVDs to her name, Dolli Irigoyen is one of Argentina’s best-loved and most respected chefs. She’s filmed on locations at numerous places such as at Perito Moreno glacier with just a chef’s jacket to keep her warm; this photo of her preparing rosemary-infused kid with peppers and olives taken in San Luis in 2008, has a double-sided story to it.

Dolli says:  “I was filming a series of DVDs for La Nación newspaper and had the chance to visit San Luis. I cooked outdoors in a field, where the idea was to use local ingredients such as lamb or kid, but I was also preparing that particular dish for [singer-songwriter] Fito Páez. He was recording at a studio in San Luis, so I had the chance to cook for him.

“Cooking outdoors is great fun, as is working with fire, although it can have its disadvantages. The wind, the temperature, the sun and the light all play their part when filming for TV, as you have to wait for precise moments. The challenges of cooking outdoors have their benefits, though: that dish came out marvelously plus I also cooked a peach tart in a clay oven.

“We ate outdoors with Fito on a terrace then he played some songs for me. Along with the team – cameramen, sound technicians, lighting assistants – we spent the rest of the day eating. Behind that photo, there’s a whole team working, buying and assisting. And when it’s like that, I cook for everyone and we all enjoy eating together.

With a slew of shows for El Gourmet TV channel under his belt, Córdoba-born chef Pedro Lambertini has filmed in much of Argentina. He set up a curious kitchen in his native Córdoba, filming Frutos de las sierras de Córdoba in 2012.

He says: “Cooking on location means the usual difficulties can be rather different! It can be hard to source ingredients on location, for example, and fires often get blown out by the wind. In this photo taken in Córdoba, I cooked standing in the stream barefoot for three hours.”

Pedro and team had to set up a makeshift kitchen in the middle of a stream. “First, we had to fix my work surface in the water so it didn’t move. The idea was I’d cook on the table in the water, get out of the stream to tend the rabbit braising in stout in a pot atop the parrilla and a frying pan with pears in it, then go back to my table.

“The river bed was really stony and I wanted to wear my trainers; I didn’t mind getting them wet.” But the production crew had other ideas, he adds. “We had an exchange of words about wearing shoes and in the end I went barefoot. And when I saw the footage, I had to admit that it would have looked weird if I’d been wearing shoes. It was a great location though, and looks lovely and spontaneous.”

Another time, a flock of out-of control ovines stormed his outdoor kitchen to gobble down Pedro’s ingredients. He recalls: “Sheep started bleating behind me, which wasn’t part of the schedule, then they got their snouts stuck in to eat ingredients from my worktable. The director called out ‘look who’s behind you!’ –  I couldn’t even see them approaching!  It looks like pre-production set it all up but but in fact they didn’t – the sheep simply appeared of their own accord!”