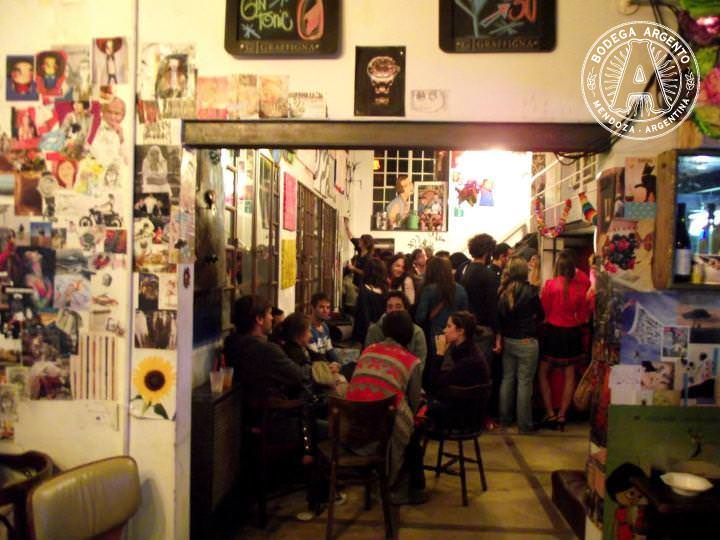 You reckon you’re rocking the BsAs art scene. You’ve ticked off the MALBA, PROA and Museo de Bella Artes. You’ve hit up at least four indie galleries that weren’t in Time Out, done your own graffiti tour sin guide gracias-very-much, uploaded one Facebook album of street art, and even completed a whole seven days of arty malarkey during La Semana del Arte.

Now you want to go to cultural ‘multi-spaces’, to ‘happenings’. You want to integrate with artists, get your art fix with (preferably free) plonk, perv pics painted on piel, dance alfresco at block parties and hang out with live bands, urban artists and tightrope walkers. You want to penetrate the tricky tourist-local barrier. You want to mustache-marvel and hipster-diss. You want to express yourself, perhaps scribble on a canvas and have it celebrated.

For an interesting change from Buenos Aires’ main museums and impressive art galleries, let’s get boho-pretentious in a city that is all about the arty parties. 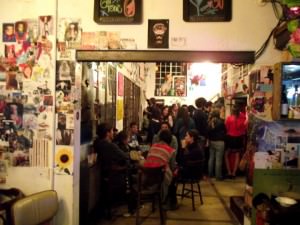 Fancy sitting around a bonfire at an impromptu empanada-making dinner with seasoned art buffs and artists for company, canvas in one hand and paintbrush in the other? El Gato Viejo ticks the ‘unique multi-use arts space’ box. It’s owned and run by the eccentric and controversial (understatement) Carlos Regazzoni – a madcap artist who turned a desolate railway yard into his studio, gallery and part-time bar/restaurant/live music den. Near Retiro, it looks like a scrapyard, but look again and you’ll see those are actually sculptures. Don’t call it rubbish, bohemia-skeptics, his work sells for thousands of dollars – Madonna and Antonio Banderas even own pieces. When he’s not in Buenos Aires, he lives in a French castle or works in a bakery by his 16-foot-tall Don Quixote. Pretentious, moi?

El Gato Viejo is one of many independent smaller art galleries to take part in the city’s Gallery Nights – a barrio ‘crawl’ that makes art accessible within social events. More interesting than the open doors and free-flowing champagne are the people – a cross-section of fur-wearing wallets, tourists, locals and the curious. The city’s beautiful boutique bookshops are also opened up and made into pop-up galleries – you can scout out where to write your next blog/book. Beware critiquing the works too loudly as the ones responsible are usually there. 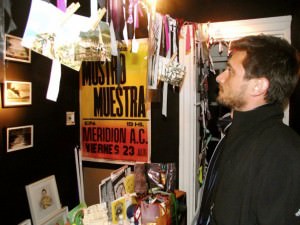 It’s not really a bungalow and it’s more than one room. Villa Crespo’s Bungalow Room is a screen-printing place that has been turned into a conceptual arty house party. Up-and-coming artists and bands in one room, t-shirt prints in another and rails of bizarre clothes for sale in the next – plus a chihuahua (hey, it’s not a party if there ain’t a mini-dog in a pocket). Cheap beer, homemade cakes and an awesome ‘Rescate en el Barrio Chino’ (Big Trouble in Little China) poster finish off the hipster vibes. Once, taken in by the very cool underground onda, I bought a very wrong dress. Wear your wayfarers at night. 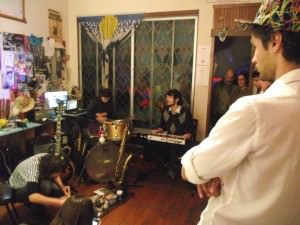 This is one of my favourite places – not just because I met one of the waiter-slash-artists on a bus to Cabo Polonio nine years ago, and he invited me to stay in his hippie shack. Nor because the guys there are open to just the merest suggestion of a lock-in. No, I love Il Ballo because they are not just a trattoria serving old-scool homemade pasta. I mean, just look at their website. 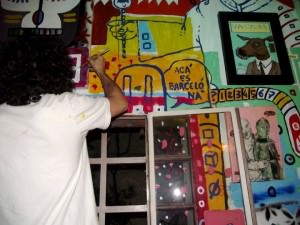 Run by an artist, this Italian restaurant-cum-gallery hosts exhibitions, classes and things like ‘Urban Aerosol Workshop’. Pretty cool, huh? However, what you really want to be around for is ExpressArte, held on the last Wednesday of each month – a multidisciplinary arts festival revolving around one of their Palermo eateries. Their block parties are legendary, with bands performing on a giant stage set up in the street. Recently, they’ve even expanded to club nights at Niceto. Expect psychedelic painted boobs, dreads on the decks, tightropes and pictures attached to trees, free gnocchi, Campari and wine. 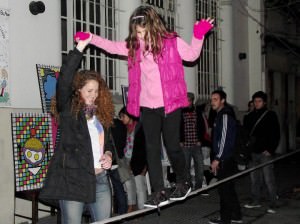 Funambulism is an art – Photo by Lisa Goldapple

Juanele’s blog is a must-read, as it includes a full list of weekly art happenings. A non-profit arts organisation, Juanele aims to “open your eyes to BA’s art”, presenting it in a more unusual way through events that bring artists and art-lovers together. Painting parties and spoken word events, interactive art battles, ‘installation-offs’ and Max’s Supperclub (memorable themed nights that combine art with food) are all held in their incredible graffiti-covered HQ in Almagro. 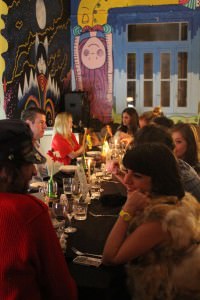 Open your eyes to Juanele HQ – Photo by Lisa Goldapple

Rick Powell, founder of San Telmo Art Walk, is the man behind Juanele:

“Our events always incorporate art and artists, but with liberal doses of fun and rowdiness fuelled partially by alcohol and other controlled substances but also by freed creativity. We also make no distinction between street art and “high” art or any other kind of artistic practice. We don’t care. We like it all. If you come to one of our parties, you’re likely to see a broader spectrum of Buenos Aires artists and art-lovers than anywhere else in the city at any other event. Argentines tell us that and in a city and society that’s famous for its stratification, I’m very proud of that fact.”

Current Juanele resident artists Neurorama consist of Fernando and Axtor, who VJs at another arty party, Voyeur. These are a series of nights, held in bars or restaurants such as Caracas or Shampoo. With underground artists, photographers, DJs, musicians and live painting, this is one for the fashionistas – things can get quite wild. 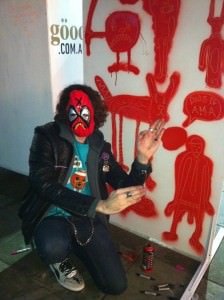 Is it Peter Parker? No, it’s Axtor – one half of Neurorama, Juanele’s Resident Artists – Photo by Lisa Goldapple

Axtor reckons the most excitement you can have in Buenos Aires is when you stumble across the unexpected:

“The most fun is when you find new things such as abandoned cinemas that show rare films in plastic chairs, or creative parties organized by magazines and small house parties – even with all the suffocating smoke. The best arty party I ever went into was in a house that was up for demolition, I could break things. Breaking things is a cause for celebration for me, like the Greeks in the New Year. We’re always breaking boundaries in Argentina.” 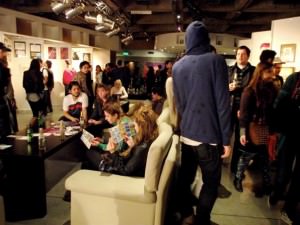 Buenos Aires knows how to do free festivals. You can often catch art, music and film coming together under one roof and courtyard in the city’s prestigious Centros Culturales. Look into the experimental Noche en Vela, the chaotic Festival Cuidad Emergente, the interactive Marder Festival de Arte en Tiempo and the oh-so-street Puma Urban Art Fest at Centro Cultural Recoleta. So the latter’s alt-corporate, but who cares? Last year I enjoyed more than 20 local bands including the psychedelic Dietrich on the outdoor stage, viewed Banksy’s documentary ‘Exit Through the Gift Shop’, watched live skateboarding and painting from London-based D*Face, and even met one of the rock world’s top poster artists, Frank Kozik. Kozik described Buenos Aires as “badass” by the way.