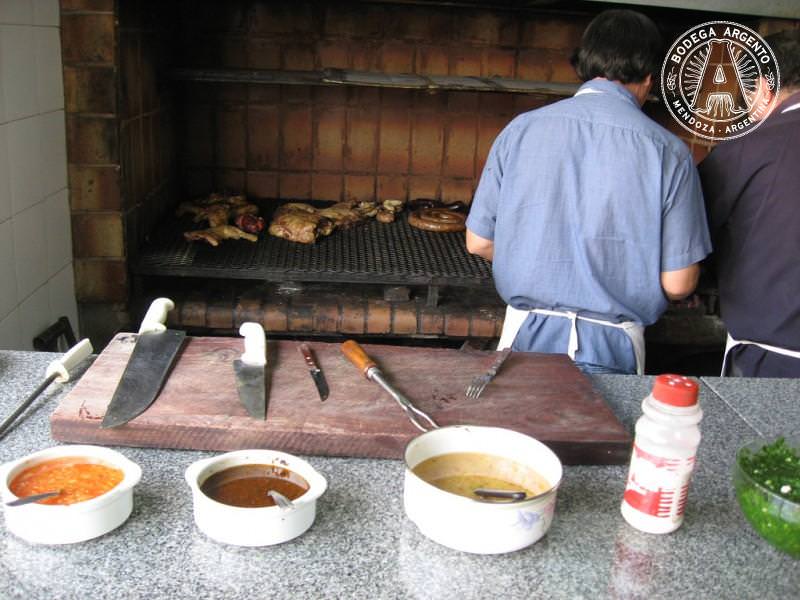 Recently my vegetarian mate Brian came to Argentina – land of the cow – on a ‘meat sabbatical’. OK, that’s not strictly true – he came here to go skiing in Bariloche, but what he discovered in Buenos Aires was so much more enriching, literally: parrillas (roll your ‘r’s when you say it).

A parrilla is a simple iron grill barbecue and they’re everywhere. Now that spring has sprung in Buenos Aires, you can literally smell the chargrilled chorizo smoke rising from the terraces – whether from local restaurants or home-cooked asados.

After six years of not eating anything dead/previously known as alive, Brian cast his vege ethics aside and rushed headlong into some real Argentina food, ticking off every form of meat available from Belgrano all the way to San Telmo, at one point even chomping on a blood sausage. Now that he’s reinvented as a carnivore and is probably in the Andes ripping flesh from alpaca with his bare hands, let me take you on a Buenos Aires Carne-val.

Each parrilla offers a different experience – it’s quite a personal thing. The hole in the wall nearest your apartment might do your favourite and cheapest parrillada (mixed grill), but sometimes you need somewhere sexier. Here’s a range… 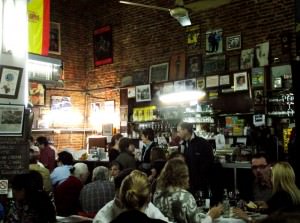 This is Bono’s favourite restaurant in Buenos Aires, but don’t hold that against it! Recently the legendary Pixies came to Buenos Aires and asked me for city tips (yes, I just name-dropped). Pressure… where would impress one of the world’s most important grunge bands on their first ever day in South America? It had to be the classic El Obrero. This is THE place to go to for authentic old school ambience and history: a family has been running it for over 70 years. Whilst drooling over your ojo de bife, why not play the ‘match the silver foxes to the dashing waiters in the 70s’ wall photos’ game? Beware, this is in ‘the hood’ of La Boca, so get a taxi to the door.

It’s expensive, but its reputation as the best parrilla in Buenos Aires allows it to be. Las Lilas boasts its own private ‘estancia’, a free-range ranch of grass-fed cows. Sit in the elegant wood-and-leather room or people-watch on the deck. Warning: don’t fill yourself up on the salad bar and table cover of superb breads, cheese, olives and peppers. You want to do justice to the beef and leave a happy cow, rather than leave any happy cows.

Palermo’s most talked about parrilla. Many report La Cabrera is not as cheap as it used to be, is full of tourists and a bit of a ‘meat market’, but it has great spread – and that is why it remains a Buenos Aires staple, especially for people-watching on the outside corner. Get there early as there can be a long wait. 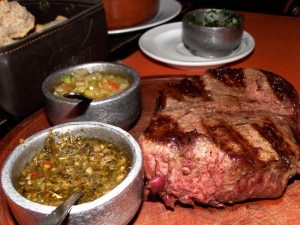 Your first steak in Buenos Aires is always the sweetest – therefore Matarife will always be my first love. I keep returning to this unassuming parrilla in the heart of Palermo for its top quality and cheap beef. Also the best chimichurri around (a dipping sauce of fresh herbs, garlic and peppers).

Everyone has one of these low-key parrillas in their neighbourhood. I love this one as I swear it does the best chargrilled provoleta (oregano topped provolone cheese) in the city and at the cheapest price. Also sample the entraña (skirt steak) and bondiola (pork shoulder). 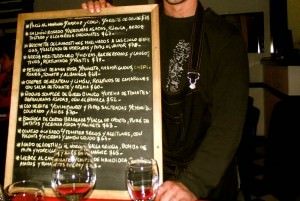 Not strictly a parrilla, but this intimate tapas restaurant is one of my favourites (so I um-ed and ah-ed about telling you about it). Choose ojo de bife and bondiola from the chalk menu carried around by the (extremely good-looking) waiters. Be careful when you leave not to knock over the neighbouring table’s bottle of wine with your handbag. I did. I told you it was ‘intimate’.

La Brigada is an old-fashioned parrilla with an insane amount of futbol memorabilia. Waiters cut the lomo with a spoon – how cool is that?

Last I heard, Brian was heading into El Baqueano, a tiny restaurant with an exotic Argentinean meat bar of ‘skin, feather, river and sea’. He obviously wanted to taste their alligator brochettes and llama carpaccio. Not for the faint-hearted.

DONENESS: Argentines love their chargrilled meats to be a punto (medium) to bien cocinado (well done). Ask for your steak jugoso (rare) or medio jugoso (medium-rare) so they don’t overdo it. This isn’t France even if they think it is.

SHARE: The steaks are huge. Share and you’ll still have room for a panqueque de dulce de leche.

SIMPLE RECIPE: If cooking at home, keep it simple. Just add a little salt and some chimichurri.

HOME BBQ: Get yourself invited round to a Porteños house for an asado – homecooked hunks of cow on their outdoor barbecue. Remember to applaud the Asador (he who grills).

TRY: Make your own choripán (chorizo + bread + chimichurri = simplicity at its best). The more adventurous can go for various offal such as mollejas (sweetbreads), chinchulín (intestines) and morcilla (blood sausages).

In memory of Brian’s inner vegetarian – may he forever rest in peace.