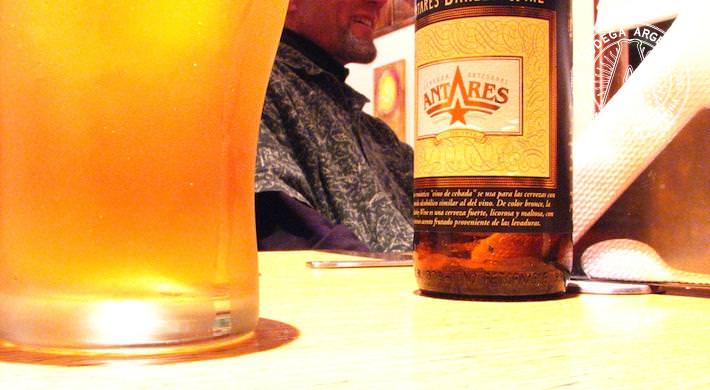 Ten years ago, even before I was such a beer snob, when a friend and I were planning parties, we would put “NB” on the invitations: No Brahma. OK, maybe I was a beer snob then, but the Brazilian beer, a whole 20 centavos cheaper than Quilmes, wasn’t just bland. It was offensively bland. Like Kenny G.

I hate using the word ‘ubiquitous’ as much as the word ‘unique’ (and writers who try to get around clichés by starting sentence: “I hate using the word…”), but Quilmes ‘Crystal’ is ubiquitous in Argentina. Its blue and white angled logo appears on every kiosk, billboard and ashtray. Heck, they even sponsor the ‘Fiesta de la cerveza artesanal’. In a great many places there is a choice of two beers: Quilmes and Isenbeck, the latter we didn’t even have to tell anyone not to bring to parties. No one did. 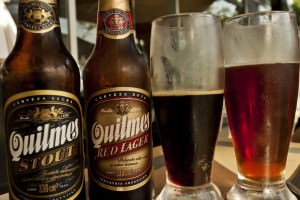 Now, I’m not down on Quilmes; it’s cold, fizzy, and not the alcoholic equivalent of Kenny G (think Elbow). And it only came in 1-litre bottles. Wah-hey. The Argentines shared. Pah, not us Brits. And when you’re feeling flush, there is Warsteiner, by far the best of the commonly available bottled beers.

A New Dawn for Craft Beer in Argentina

Then around the turn of the century Antares opened. It is a bar bar: wood tables, copper pots, decent food and it served ‘artisanal’ beer made in Mar del Plata. We’ll forgive the tiny tasting glasses (only wine should come in ‘flights’) because they also served beer in pints and some of it was even good. Like predictable ex-pats, we packed the place, moaning about tea bags with string and why the Guardian doesn’t publish the quick crossword online over pints of Scotch Ale and Porter, although my favourite was actually the lager-like Kolsch. With the exception of the latter, we’d almost forgive the freezing temperature they served it at. 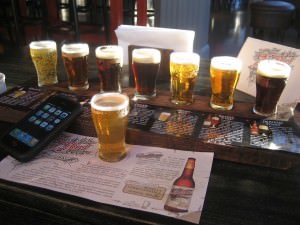 Everyone loved it. And I’d say it kick started the current wave of artisanal beers in Buenos Aires. Pedants will point out that Buller Pub, a true brew pub, in Recoleta existed long before, and some of its beer is very good. But no one goes drinking in Recoleta.

The Best Brew-Pubs in Buenos Aires

As the novelty of cheap, good red wine began to wane and the thought of yet another night on Quilmes beckoned, I began to make more of an effort in finding quality beers. And to do this I needed to search the bars. Antares sells Antares, and while it’s a nice bar, I can’t haul my beer belly to Palermo every time I want a pint. Thanks then to Otro Mundo that set up in 2004 in Santa Fe and immediately started brewing complex and flavourful beers. I found them on a wayward night in Las Cañitas (no one goes drinking here either – unless you are the type that turns up your collar on a polo shirt). But if you do end up around here, it’s to Van Koning Dutch Pub you go. Fazio, the owner, made beer, real beer. Their hoppy Golden Ale was superb. The Red a little sweet for British palates – but it is an enduring success: I saw it in Spain once. 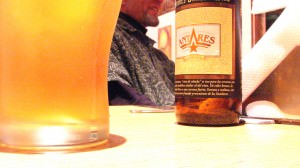 Fazio pointed out another little bar in Boedo called Cossab in an odd little nook in a galería. I walked in to the incongruous sound of Yes and hunted down the landlady. “My husband and I love prog rock,” she told me. “And all things British, especially the beer, so we made our own.” Today she presides over the pub with the true elan of a London boozer. As she plied me with beer, the soundtrack barely wavering from Genesis (the early stuff) and Blind Faith (original gatefold sleeve on the wall), the stout (Cossab Negra) was a highlight as was their IPA. It was a revelation. It was the nearest I’d seen to a proper boozer (along with Bangalore, which serves Antares along with other brews, and Gibraltar). I was a Cossab Rubia and a Cossab Scotch down, when I finally got up to the bar. Oh my. There were more than 100 beers from microbreweries all over Argentina and beyond. Quite simply, if there’s one place in Buenos Aires to find beer it’s Cossab – as the little Viking logo attests, it’s beer Valhalla.

Since then, beer has spread beyond the preserve of homesick Brits and become a significant industry, with a reputed 800 beers on sale across Argentina, made in Argentina.

The artesanal beers that you’ll find most often in Buenos Aires are Barba Roja (go for the ‘Strong Red Ale’), the experimental El Bolsón from Patagonia, and Zeppelin which makes English-style golden and pale ales as well as a ‘Robust Porter’.

It’s not all good of course – Argentinian beers tend towards sweetness and malt – and hops seem as elusive as a non-leaking air con unit, but somewhere along the learning curve the beer has reached excellence.