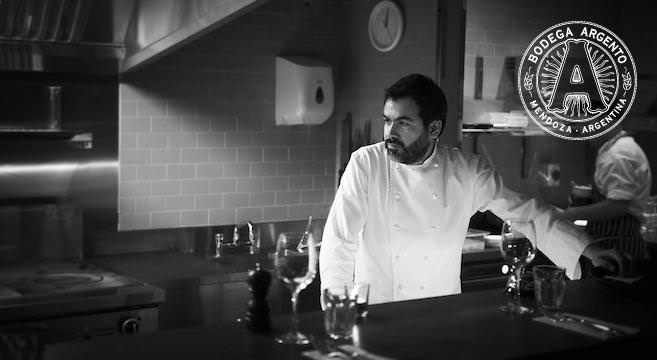 Got a yen for a vast steak, a Malbec with altitude or some fare with Argentine flair? ¡Si! Are you currently in Buenos Aires or any other part of Argentina? ¡No! Well, all is not lost, not yet. Wherever you are in the world, there’s probably an Argentine cooking up a storm or cracking open up a bottle of something special from Mendoza right under your nose. Check out our guide to Argentina’s food and drink experts who are making their mark globally.

Buenos Aires born and Patagonia raised, Diego Jacquet is part of the generation of Argentine cooks whose ambition was to gain experience in Europe during the 1990s. That hard work paid off when Diego opened his first enterprise Casa Malevo in 2010. With a robust CV that includes apprenticing with Francis Mallmann at Cholila, forming part of the team at New York’s Aquavit and executive chef at London’s The Trafalgar boutique hotel, Diego says: “I always dreamed of working in Europe when I was younger but as I lost vision in my left eye when I was 14, it always took me a bit longer to get things done.

“My first job was at Casa Nicolasa in San Sebastián in 1998, once my health was better, and I also worked at El Bulli that year. After working the season there I returned to Esquel, where my parents live, to set up my own restaurant. I thought I knew everything, but clearly I didn’t because it was a total disaster – yet that was the greatest lesson I could have learned.” 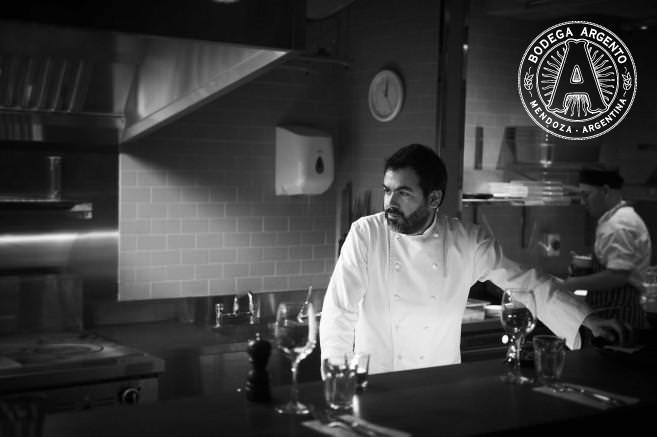 In 2008, Diego went to Hong Kong for a week-long course and introduced chimichurri and dulce de leche, which he loves, to local journalists. He says: “It was an unknown world to them, and they adored it! That’s when I started to assess what was going on in South America – I realised Gastón Acurio was leading Peru and Alex Atala was leading Brazil but nothing much was happening in Argentina at the time – and I thought ‘I really want to do Argentine cuisine.’”

After several months travelling the length and breadth of his homeland to familiarise himself with dishes, ingredients and producers, Diego opened Casa Malevo to much acclaim. He adds: “The idea was to open a restaurant where beef wasn’t the star and we could show off Argentina’s cuisine – that’s a responsibility I take very seriously. I looked for small producers – including the wine – and I also started to import beef.”

Five years on and Diego is also chef patron at Zoilo, Abasto butcher and wine merchant and Singapore’s BoCHINche.

Choosing “the pearl of France” on the French riviera as the location for his restaurant Mirazur, Mauro Colagreco is the only Argentine chef to hold two Michelin stars. In addition to ranking 11 in the world, Mauro is also a judge for the prestigious Bocuse d’Or chefs’ competition. His professional experience began with French chef Bernard Loiseau, a man Mauro calls “passionate and meticulous about his work, so much so that he commit suicide because he thought he was going to lose a [Michelin] star. I think passion and perfection is good but you also need to have your pied à tierre (feet on the ground.)” 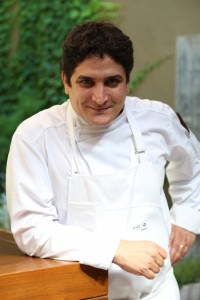 Talking about Mirazur, Mauro, who is also HSBC’s gastronomic ambassador, says: “We produce a very free and personal cuisine, without ties or legacies, and the only things that guide our cooking are the season, the product and inspiration.

“Argentine products sometimes intercede, such as yerba mate or dulce de leche, or other childhood memories from time spent at my grandparents’ house in Tandil.”

New York’s Lower East Side is a long way from his Punta Alta origins, yet Fernando Navas chose the Big Apple to make his restaurant debut. When his culinary training in Mar del Plata ended at the tender age of 19, Fernando went travelling and ended up in the US 15 years ago.

El Bulli-trained Fernando says: “I worked at Nobu in Miami before moving to New York City in 2006 to work for Sushi Samba. I was executive chef at the Park Avenue branch, then corporative chef overseeing Las Vegas, Chicago and Miami before opening London. 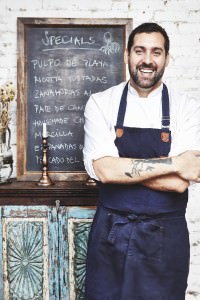 “Then it was time to strike out on my own with Balvanera, which opened five months ago and combines signature cuisine with an Argentine identity. Most Argentine restaurants in the US are more or less steak houses with a tango theme, and my idea was to change that. The first names I came up with were clichés, but I’d always liked the sound of Balvanera as it was a marginal and bohemian neighbourhood often mentioned in Borges’ poetry and in tangos.” 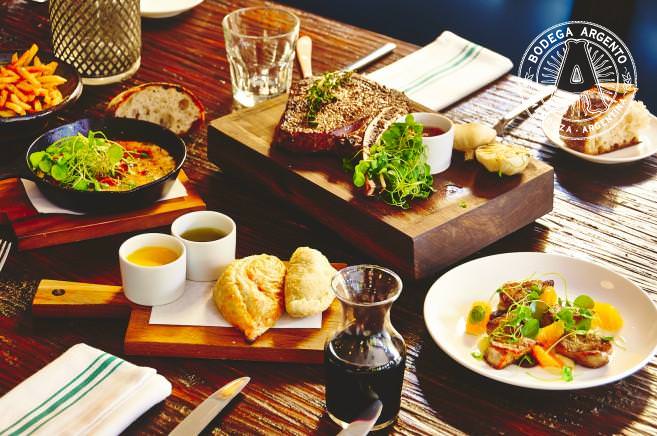 With respect to Argentine produce, it’s not always easy to get hold of in the US, and sometimes Fernando depends on kindly friends for goods. He says: “It can be hard to source Argentine ingredients in the US plus it’s illegal to import Argentine beef, but I can get hold of olive oil, dulce de leche and honey. I find the best local products I can to make traditional dishes, then play with them. Typical dishes include strip loin (bife angosto) from grass-fed Uruguayan cattle, bone-in rib-eye (bife ancho), provoleta, beef and sweet-corn empanadas as well as blood sausage. My tender and crispy sweetbreads aren’t typical as they are served with a grape mustard, arugula, oranges and watercress sprouts instead of lemon juice.

“When Dante (Liporace from Tarquino in Buenos Aires) guest chefed at Balvanera last October, he brought me some bottles of Zuccardi’s Arauco olive oil as well as some goat’s milk dulce de leche from Cabañas Las Piedras and carob honey, which I was really grateful for!”

Fresh from her recent victory to be re-anointed Argentina’s best sommelier of 2014, Paz Levinson left Buenos Aires for China and France. Currently guiding diners through wine lists at the prestigious Michelin three-star Le Bristol in Paris, Paz says: “China’s wine market always interested me and I was curious to experience it first hand. I was also interested in a society where wine is a relatively new concept. 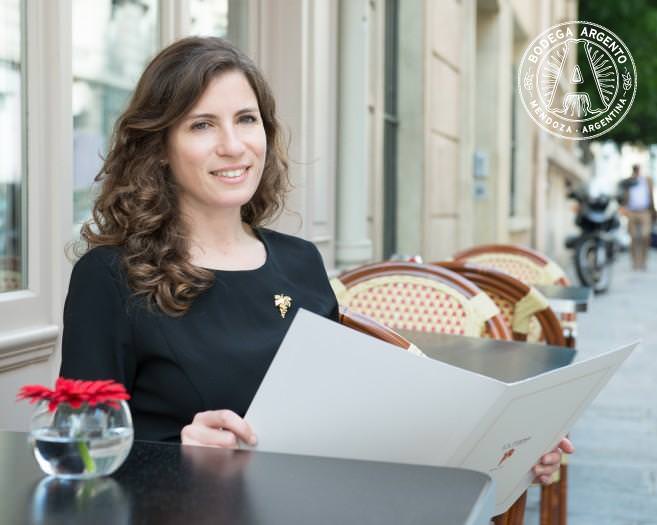 “After China, I went to France as I wanted to learn French and experience being a foreigner – besides, I could learn the language quicker than I could pick up Mandarin Chinese! And because of France’s culture, the wine, because Paris is a city that strikes a balance between certain order and certain chaos and still breathes culture. I like Paris a lot as it’s in the middle of everything, just a few hours from prestigious and historic vineyards.”

Given her vast knowledge of Argentine wine styles, Paz easily incorporates her top picks into menus. She adds: “Everywhere I go, I influence lists with Argentina! It’s a pleasure to promote our wine and show it off to the world, above all to a French world where they produce such great reds! I’ve added various products to El Galpón wine store, and I also incorporated some labels onto La Ferme Saint Simon’s menu, which have sold well. We’re waiting for a host of Argentine wine at Le Bristol’s restaurant, which has three Michelin stars – inclusions that had never been previously considered.”

While Fernando Trocca is the brains behind Belgrano-based Sucre, a Latin America 50 Best restaurant, he is also executive chef of the UK’s Gaucho restaurant chain. Working with renowned firestarter Francis Mallmann back in the days when French cuisine was the mark of good taste in Buenos Aires, Fernando has worked in Florence, San Sebastián and Madrid, used to cook for Sweden’s ambassador to Argentina and also took on New York City’s tough food scene to open two restaurants. 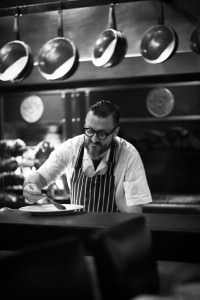 Based out of José Ignacio, Uruguay for the summer and fresh from his five-chef, 10 Manos event, Fernando says: “Gaucho is very Argentine in many aspects but it’s also Latin American. It’s Argentine when you sit down to eat extremely high-quality beef such as rump, fillet, skirt and rib-eye, plus the wine list is strictly Argentine.

“While beef from the pampas is the most important ingredient on Gaucho’s menu, we try to incorporate as many Argentine ingredients as possible so we can show off Argentina with pride. We’ve used Patagonian hake, for example, while paprika from Cachi in Salta and prawns from Chubut also feature on the menu.”

Kicking off his culinary career at Aria Sydney 15 years ago, chef Elvis Abrahanowicz has been creating waves on Australia’s demanding food scene ever since. Opening tapas restaurant Bodega in 2006 with business partners Ben Milgate and brother-in-law Joe Valore, it was their 2010 launch, Porteño, that has got tongues wagging and taste-buds salivating. 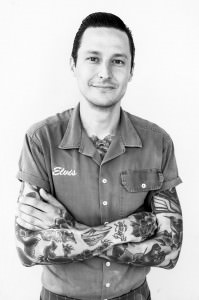 The Argentine restaurant, whose flames and embers are expertly handled by Elvis’ parrilla-loving father Adan, has picked up a cluster of awards for its wood-fired lamb and coal-grilled Wagyu skirt steak among other dishes; supporting cast members Gardel’s Bar and Porteño Store wine club also form part of the Abrahanowicz-Milgate stable.

Elvis, who especially misses Argentine ice-cream, says: “At Porteño, we use the traditional asador and parrilla methods of cooking but use Australian produce to make all our dishes, including chimichurri and empanadas. With respect to cooking, my dad has passed on his grilling secrets, but only time and experience can make me as good as him – and I’m working on that.”

After leading the three kitchens at Recoleta’s Palacio Duhau Park Hyatt, chef Federico Heinzmann took quite the detour to South Korea. Staying within the hotel group, he worked in Seoul for two years before becoming chef de cuisine at Park Hyatt Tokyo’s New York Grill & Bar where he plays with South American flavours. 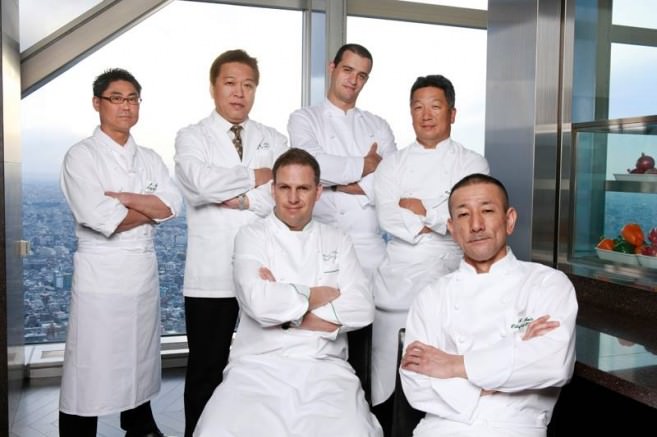 He says: “I’ve been working at New York Grill & Bar, which is the restaurant featured in Sofia Coppola’s Lost In Translation located on the 52nd floor of Park Hyatt Tokyo, since last April. Like many Argentines who know how to work a grill, it wasn’t too hard to adapt to the restaurant’s style.

“The world is increasingly recognising the quality of Argentina’s meat so it’s becoming more common to see chimichurri on menus, even from chefs who aren’t Argentine. One dish I do prepare Argentine style is sweetbreads, and people really like them; I also make a yerba mate ice-cream which is called Latino green tea here, plus I use quinoa from Salta. 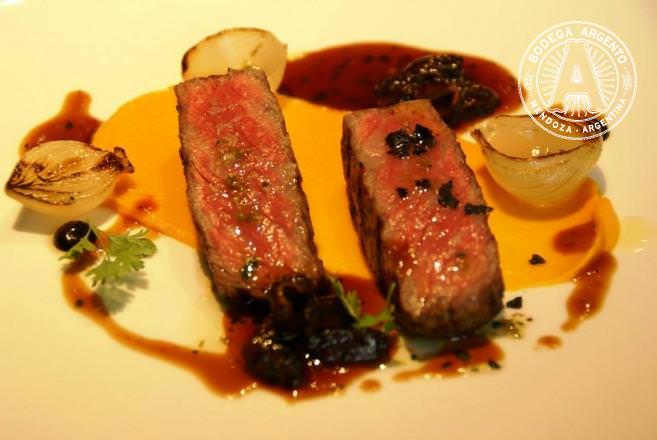 “Japanese meat and fish are too different to Argentine products to make a comparison but I think Argentina wins when it comes to sweet things. Aduki beans and rice are considered dessert in Asia, but they’re not for me! That final touch is always missing and of course, dulce de leche is unbeatable!”

Other Argentine gastro heroes tantalising taste-buds around the world include Sao Paulo-based cook Paola Carosella who heads award-winning Arturito and is a judge on Brazil’s MasterChef; and bartender Renato “Tato” Giovannoni who created Gaucho’s drinks list and is currently based out of Rio de Janeiro. 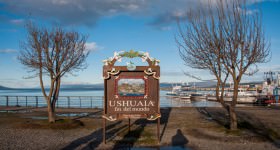 Ushuaia Tourism: What to do in the ‘City at The End of The World’

One response to “Argentina for Export: Chefs & Sommeliers Around the World”